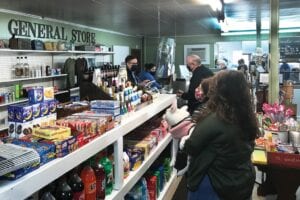 NOW OPEN — Business was brisk when this photo was taken at The General Store at Creek Crossing. The new store, adjacent to the Partridge Post Office, is owned and operated by Ernie and Tiffany Scott. It is located off U.S. 119, near Lewis Creek, in the space formerly occupied by Bobby and Betty’s Grocery, which closed in late fall after the retirement of Bobby Lewis, a former Letcher County magistrate and school board member.

A Lewis Creek couple have created their own oasis in the food desert South of the mountain.

They and their neighbors along US 119 South used to have a choice of three stores to buy their basic needs and grab a bite to eat, but over the past couple of years those stores closed one by one. That left the folks along the Poor Fork of the Cumberland River with but two poor choices. They could cross Pine Mountain to Whitesburg, or drive several miles into Harlan County to Cumberland.

That changed last week when Ernie and Tiffany Bullock Scott opened the General Store at Creek Crossing, filling the void left when Bob Lewis had to close up.

“Bob had the store since the 70’s, and his mother had it before him. She had it in her house,” Tiffany said. “Bob had talked to my family before about taking it, and we just felt like now was the right time.”

They leased the store from Lewis in December and started working on a plan to serve their neighbors, and travelers who might be passing through, or coming to visit.

The General Store at Creek Crossing, pictured at left, shares a building with the Partridge Post Office. The store’s new sign is pictured above.

“We spent the month of December kind of renovating and remodeling,” Tiffany said. “We knew we wanted to continue with Bob’s vision of groceries and deli meats, but we decided with the economy the way it is, that wouldn’t work for us by itself.”

“We’ve sold 50 pounds of fudge since we opened,” Tiffany said Tuesday, barely a week into the new business .

.e store is off the main road on KY 3073, but the back of the store faces US 119. They strung a large banner up for the people passing by, but those who live nearby don’t need directions.

The store building is attached to the Partridge Post Office, and has been a fixture in the community for nearly 50 years. Tiffany said at least two families walk to the store to get their groceries because they don’t own cars. Before it opened, they had to catch a ride just to have food to eat, because as everyone who lives in Letcher County knows, buses don’t stop here and there isn’t a yellow cab, an Uber, or a Lyft anywhere in the area. 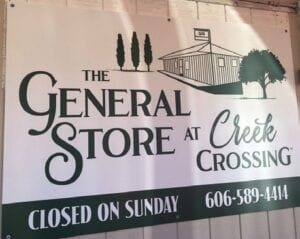 There are no restaurants on that side of the mountain either, and sandwiches have quickly become a bestseller at the store.

But while it was mainly intended to be a grocery store, Tiffany’s marketing background is pushing it another direction as well – tourism.

The store sits less than a quarter mile from the Harlan County line, and with more visitors coming into the area, she has stocked the store with local products from apparel from a Letcher County company to honey from Harlan County. It sells fishing lures made in Perry County, and will soon sell the licenses to use them. It’s also getting its gas pump back up and running, and is working with the tourism commissions in both Letcher and Harlan counties to supply travelers with brochures and maps.

While Tiffany said they’re being cautious for now until they see how the store goes, they’re off to a roaring start and have big plans for when the weather warms up and Covid-19 begins to go away. Bonfires and live music are a definite maybe, as is an outdoor shelter and picnic tables.

For now, the business is confined to four walls, and masks are required inside, as is social distancing. The couple feel strongly about making sure people stay healthy, and for good reason. While they are new to store keeping, they have other careers. Both Tiffany and Ernie work for the University of Kentucky College of Medicine – he is director of the Kentucky Office of Rural Health and she is project manager for Faith Moves Mountains, a diabetes project in Whitesburg.

One response to “Thanks to this couple, Partridge area is no longer a ‘food desert’”