By ANDREW WOLFSON
The Courier-Journal 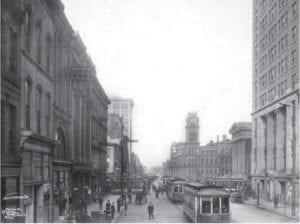 This photo, from the Caufield and Shook collection at the University of Louisville, shows Jefferson Street in Louisville in 1915. (Photo courtesy The Courier-Journal)

The war to end all wars raged in Europe. Tuberculosis and influenza reaped lives unchecked, and one in 10 babies died before their first birthday. Louisville had just enacted one of the nation’s most draconian segregation laws, barring blacks from moving onto any street that was mostly white. And in just two days a masked mob in Henderson would pull a black man from jail and hang him from a willow tree.

But as Louisville paused to celebrate Thanksgiving 100 years ago, it was prosperous, peaceful and happy with itself.

“Louisville will wake this morning with a song of genuine Thanksgiving in her heart,” The Courier-Journal reported on November 25, 1915. “With factories humming and other industries thriving, Louisville folk are in the mood to enjoy the day.”

What was life like in Louisville — and across the land — a century ago? Was it a simpler, easier, kinder time, as nostalgia would have it, or does it give cause to be thankful today?

A portrait of the era drawn from Census data and the pages of The Courier Journal itself reveals a time when life was tougher, especially if you were black, poor or female.

A loaf of bread was only 7 cents, but Americans spent half their paycheck on food.

The average home cost $3,200, but there was no insurance if your home burned down, and it probably was insulated with asbestos.

There was no minimum wage. Typical annual earnings were $687, comparable to about $16,000 today. Women earned half that. Only 13 percent of Americans had a high school diploma.

Stewart’s Dry Goods advised it would not extend shopping hours for the Christmas season. “We believe there are few people served by the store who cannot so plan their shopping that they can do it to their complete satisfaction dur- ing regular store hours,” it said in an ad.

Louisville was small enough that the newspaper reported on Thanksgiving Day in 1915 that “Mr. and Mrs. Morris A. Sachs left yesterday to spend the holiday as the guest of their daughter, Mrs. Julius Helburn, at her home in Eminence,” while “Miss Isabel Haldeman” (who happened to be one of the newspaper’s owners), “has returned from Buffalo, where she was the guest of Mrs. Preston Porter.”

Just like today, critics lamented the rise of fast food, or “patent food,” as they called it. “With patent food, we merely warm things up a bit,” a poet wrote in the newspaper on Thanksgiving Day. “You do not cook a meal today. You just assemble it.”

Navete seemed to rule the day, especially on science. The Courier-Journal reported a Henderson farmer was well on his way to producing a crowless rooster — “There are seedless grapes, why not crowless roosters?” he asked. Another story told how a young man demonstrated on Thanksgiving eve in performances at the YMCA how he was able to grow “six and one half inches” by “purposely dislocating every vertebrae.”

The twin scourges of the day were public spitting — Health Department inspectors passed out pink cards to scofflaws reminding them it was illegal — and prostitution, particularly in a seamy area known as “The Line” on 7th Street between Broadway and Market, which was home to a dozen brothels. A citizens’ task force described it as the “most cancerous growth on the community, leaving in its serpentine trail thousands of thousands of cases of paralysis, blindness, idiocy, and unspeakable physical and moral degeneracy.” The discovery of penicillin was still 13 years in the future. Some crime stories could have been ripped from the headlines today.

On Thanksgiving eve, a Methodist minister accused of hypnotizing a parishioner and then having “improper relations” with her was convicted by a jury of 12 clergy and removed from his post. The same day a dozen detectives “swooped down on three opium joints” and “gathered in 17 habitues of the places, together with ‘hop’ pipes and large quantities of opium, morphine, cocaine and hypodermic needles.”

One of the suspects, who had a rabbit’s foot in his pocket when he was arrested, told a police officer “you can keep it mister. It sure didn’t do me no good.” There were violent crimes, of course, including domestic violence. On Thanksgiving eve, a jury convicted Thomas Lockhart, a canal lock tender, of killing his wife as she left her attorney’s office. But it spared his life, finding he’d been insane for decades. “Why did I want to shoot her for?” he had testified. “There was never a better wife in the world and I loved her.”

Citizens sometimes took the law into their own hands, like Euphemia Smith, who ran a boarding house at 831 West Chestnut St., and reported that she fired five shots at a man who crawled into her window at 2 a.m. He got away, she said, but “one of the shots took effect.”

Thanksgiving Day itself was a happier affair.

A feast of turkey, cranberries and celery dressing was served at 10:30 a.m. to newsboys so they could deliver their afternoon editions, while the menu at city Workhouse – a massive fortress for minor criminals at Payne Street and Lexington Road — was sausage, sauerkraut and gingerbread.

For the second year running, a well-placed Kentucky farmer, South Trimble, (his name, not his address) the clerk of the U.S. House of Representatives, proudly provided the White House turkey, which he described as having “skin as tender and smooth as a baby’s.” Dressed turkeys fetched 25 cents a pound at the store, while the Henry Watterson Hotel on Walnut between Fourth and Fifth streets offered Thanksgiving dinner for $1.25. Thirty-two couples were wed at the county clerk’s office, while thousands of fans flocked to the Manual gridiron for what the newspaper promised would be a “thrilling football contest” between Louisville Boys High School and a visiting “eleven” from Evanston (Ill.) Academy. It wasn’t. The home team was shut out 17-0. Across the country, the Ford Model “T” and silent movies were the rage. The Raggedy Ann doll, the milk carton and aspirin in tablet form made their debut in 1915.

Horses and mules (26,493,000) still far outnumbered automobiles (2,332,426) nationwide. Kentucky only had 19,500 autos, and car wrecks were still a novelty; The Courier- Journal reported in a front page story Thanksgiving week about one in which two sisters were injured when their steering wheel broke at 32nd and Broadway and their automobile “turned turtle.” But the car was obviously the future: Ford was about to open a plant at Third and Eastern Parkway to replace an earlier factory where 17 people produced only 12 cars a day. Louisville Collegiate School opened its doors as the first school in Kentucky committed to preparing young women for college. Women protested for the right to vote – it would be five years before the 19th Amendment was ratified guaranteeing that right. And while horsemen had proclaimed since the first Kentucky Derby 40 years earlier that a filly could never win that race, Regret, leading wire to wire, became the first to do so in a contest that enshrined the event as one of America’s premier sporting contests.

The war was heating up in Europe, to be sure. France announced it was conscripting 400,000 more “boys” for the trenches, and more than 2,000 British forces were killed or injured Thanksgiving week as they advanced on Baghdad, capturing what had been until then the obscure towns of Zeur and Ctesiphon. The day before Derby, a German submarine had sunk the Lusitania, killing 1,198 people, including Ogden Haggerty Hammond and 127 other American citizens. But the U.S. was still on the sidelines, and the strife seemed far removed from Louisville.

The Imperial German Command in Cincinnati had ordered all Germans in Louisville to return to the Fatherland for war duty, and Louisville’s German newspaper, Louisville Anzeiger, editorially supported the homeland. But most Louisville residents seemed to favor the government’s isolationist stances — and to go on with their lives. They drank at 703 saloons to pick from, watched moves for 10 cents all day at the Strand, 326 W. Chestnut, and over the holiday weekend, at the Buckingham, Louisville’s famed burlesque house, took in a special Thanksgiving twoact comedy “Yiddish Love,” starring “a clever and somewhat different Hebrew” named Joseph Watson.

Some also flocked to see a more sinister entertainment, La Grange-born D.W. Griffith’s “Birth of a Nation,” a Civil War epic that extolled the Ku Klux Klan as a noble organization and depicted blacks (some played by whites in blackface) as unintelligent and sexually aggressive toward white women.

Democratic Mayor John Buschemeyer, finding nothing objectionable in the film, allowed it to open, adding to tensions between blacks and whites. Just a year earlier, the Louisville Board of Aldermen had enacted an ordinance prohibiting blacks and whites from moving on to any block in which the other race predominated.

In the first year, two blacks were fined for moving to white blocks, including Arthur Harris, who was ordered to move. The fiery owner of Louisville’s black newspaper, William Worley, challenged the law, but Judge James Quaries said it did not discriminate against “the white or colored races” in part because it applied equally to both. Besides, he said, it “cannot be questioned” that government has the power to “preserve the solidarity of the two races” by preventing “the mixture of their blood.” Black doctors, lawyers and teachers thrived to serve their own in Louisville’s segregated society, but there were few blacks in skilled trades and many were laborers and domestics.

Newspapers, including The Courier-Journal, routinely identified black suspects by race, including a few days after Thanksgiving, when it reported that an 8-year-old “pickaninny” — the “youngest ever charged” was arrested for housebreaking at Main and Spring. “The diminutive burglar” was nabbed before anything was taken, the story reported.

Thanksgiving, which had been celebrated as a federal holiday since 1863 — when President Abraham Lincoln proclaimed a national day of “Thanksgiving and Praise to our beneficent Father who dwelleth in the Heavens” – survives.