Thanksgiving is hard on some 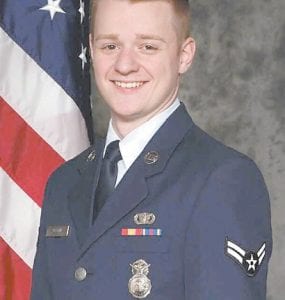 It’s unbelievable to me that this week is Thanksgiving week, but here it is upon us. These two months are really hard on people that have family members that aren’t with us anymore, but as our pastor preached last Sunday night, we must find strength in God’s word to keep on going and let the world know about Jesus Christ and what He did to save us from our sins. That salvation should be the first thing on our list of what we are thankful for.

Last year at this time Mommy, Dorothy Tacket, was only two months out of open-heart surgery and we were very worried about her health. This year she probably has a heart stronger than most 50-year-olds and for that our whole family is thankful. We are truly blessed beyond measure to have our 89-year-old mommy with us. We will celebrate our Thanksgiving dinner Friday at my nephew and his wife and family’s house. This will be the first year we haven’t had Thanksgiving dinner at Mom’s house since we moved into it in 1962. Our family has really gotten too big for Mom’s house anyway. 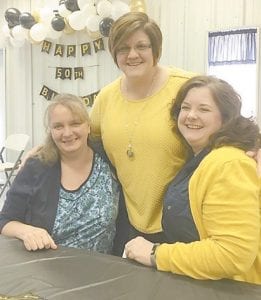 Barbara Begley is pictured with Shannon Melton Crawford on the left and Vanessa Hurt Vanover on the right.

I pray that everyone has a nice warm place to eat Thanksgiving dinner. I noticed lots of events have been posted on Facebook for dinners to feed anyone that doesn’t have a place to eat dinner. I didn’t even realize until a few years ago that we have homeless people in Letcher County. I had a man tell me a few years ago he was living in his car until Ruben Watts helped him get an apartment. There are others in our county that have no family living close by or no family at all. Let’s all make it a point to check and make sure they have somewhere to eat Thanksgiving dinner.

Happy birthday to Barbara Collins Begley. She was one of my parents when I first started working at Millstone Head Start. Her only child then was Corey Begley and he was the sweetest little thing ever. All of our Head Start staff just doted on him. We had him for two years and it broke our hearts when he started pronouncing his words correctly. We just wanted him to stay little forever. I had many stories of Corey and this is one that I don’t think I ever told Barbara. 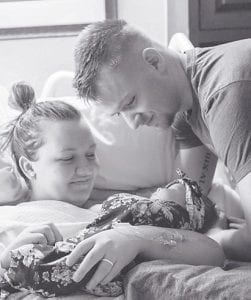 Every Friday we would have Show and Tell for circle time. That was the only time the kids were allowed to bring any of their items from home. Then at circle time we would go around the circle allowing them to tell all about their item. Well, Corey brought this big truck one Friday and Fredrick was awed by it from the get-go. I could tell Fredrick really wanted to play with it and so since they both rode on the second busload they had a little time to just play before the bus driver, Charlie Perry came back to get them. After they had played with the truck awhile Fredrick asked Corey where he got it. Corey said, “Me don’t know.” Fredrick told him he had to know where he got it. Corey said, “Santa Claus brought it to me.” Fredrick said, “Well, give me his number and I will call him.” Corey then exclaimed, “Me can’t, me don’t know his number!” I know this was supposed to be about Barbara, but when you know Corey, you know Barbara.

Other birthday girls were Billie June Craft Richardson and Verdia Jo Champion on the same day, November 20, and another one of my church sisters, ReAnna Bates Caudill celebrated on the 13th.

One of my Martha Jane Potter Elementary students is now the proud daddy of a beautiful baby girl. Eric Brown, who is serving in the United States Air Force and stationed in Oklahoma City and his wife Audreanna Brown are now parents of a little, well I probably need to change that to a whopper since she weighed 9 pounds and 10 ounces, Arbor Brown. Melissa Mullins, I know you and Pokey are as proud as can be and can’t wait to see her. Congratulations!

I saw on Facebook where Grant Barto received a medal in the 2-mile Gobble Wobble race at Raven Rock in Jenkins on Saturday, the 23rd. His mom, Sally Oakes, also ran in the 10K Turkey Trot.

Don’t forget the Pancake in Pajamas with Santa and Mrs. Claus coming up at the Grill on December 7, from 10 a.m. to 1 p.m.

Prayer requests this week are for sure Laney Webb and her whole family. Maranda Webb’s daddy had open-heart surgery this past week and they need our prayers. Pat Wright at Senior Citizens sincerely asks for prayers. All those in the nursing homes and hospitals through the seasons of Thanksgiving and Christmas also need our prayers.

My pastor and his family attended another court date this past week, just to have the trial for the man that allegedly shot and killed their son and his girlfriend postponed from early January to the end of January. This family just wants everyone to pray that he will accept a plea bargain so they will not have to go through a trial.

Please remember Oma’s ending each week, try to be in church Sunday morning. If your church has services Sunday evening or throughout the week you should be there then, also.