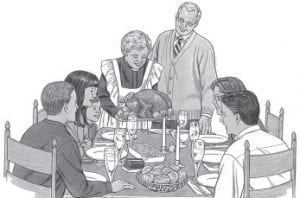 These Thanksgiving recipes are from the first grade class at West Whitesburg Elementary School:

Banana pudding by Natalie Adams: Put three little things of vanilla pudding in it. Slice up bananas and put it in it. Get these little cookies and put in it. That’s how you make banana pudding.

Turkey by Brooklyn Fields: Put the turkey in the stove for five minutes. Take it out of the oven. Then eat it.

Mashed potatoes by Kammy Surber: Pour water in. Put mashed potatoes in. Then put water. Add a half a cup of milk in, and stir it up. And then it’s done.

Turkey by Will Adams: Put it in the oven for all night. Then when you get it out, you put stuffing in it. Then you take it and then you eat it.

Green beans by Heather Miller: Put beans in the green beans. Put them in a pot and cook it on the stove for three minutes. Then you eat it.

Turkey by Ava Fisher: Put the turkey in the oven and put it on 37 minutes. Take it out of the oven and eat it.

Turkey by Isaac Pennington: You cut the feathers off. You put it in the oven to cook it for about 30 or 20 minutes or so. I think you eat turkey at 3:30 on Thanksgiving. You got to put the turkey on the plate. You got to say what you are thankful for before you eat.

Mashed potatoes and gravy by Brandon Watts: Get a potato and peel the skin off of it. Then you mash it. Cook it for two minutes.

Mashed potatoes by Taylor Hall: Get some stuff and mash it up. Stir it. Put in on a plate. Eat it.

Turkey by Mertania Brown: Put butter on the turkey. Put it in the stove. Cook it for four minutes or something. Take it out of the stove. Then you eat it.

Squash by Kaden Craft: Take seaweed. Bake it for 20 minutes. Eat it.

Turkey Ethan Collins: Buy it from the store. Cook it for 20 minutes. Get it out of the oven. Then you sit it on the table. Then people come to eat it. That’s all.

Turkey by Spencer Fultz: You kill a turkey. Pluck its feathers out. Cook it for six minutes. Eat it.

Hot rolls by Jonathon Morris: Put them on the pan. Then turn the heat on and then put them in the oven. Then leave them in for 12 minutes. Take them out. Let them cool. Then eat them.

Turkey by Ciara McBee: Put stuffing in it. Put it in the oven. Cook it for an hour. Then eat it.

Ham by Kendra Silva: You buy it from a store. When it is dinner time, you cook it for dinner. Turn on the heat and when it is done you can eat it.

Apple pie by Anna Tran: Take apples and put them in the oven for one minute. Get a bowl to put the apple pie in. Then use a knife to cut it. Then you can eat it.

Pumpkin pie by Sam Little: You get a pumpkin and you get all the seeds out. Then you cook the pumpkin for 30 minutes. The pumpkin gets smaller and flatter. And then you get it out and then you eat it.

Apple pie by Jacob Gregory: Apples and then crushed apples. Bread crumbs. And then bake it for probably a minute. Then get it out and eat it.

Corn by Chase Stewart: I think you pour in pot and put some oil then bake it for five minutes. Take it out and eat it.

Turkey by Dalton Brock: You go out and shoot a turkey. And then you pluck it and cook it for about six hours and 33 minutes. Stuff it full of bread crumbs. Then you eat it.

Pumpkin pie by Dylon Pike: You get pumpkins and you get bread. You cook for 20 minutes. Then you eat it.

Pumpkin pie by Jaydan Gibson: I would make an upside down one. Go down then up then across. Cook it for three minutes. Then get it out. Then eat it.

Pumpkin pie by Andrew Sexton: Cut open a pumpkin. Take out seeds. Put the seeds in a pan. Then you fry them. Put them in the oven. Leave it for 60 minutes. Take it out and it’s a pie.

Chocolate cake by Kaci McCown: You got to make the bottom part out of chocolate. You got to mix it up. You got to put it in a pan and put it in the oven. Bake it for 10 minutes. Let it cool when it gets out of the oven. When it cools, you put chocolate icing on it.

Coleslaw by Abby Little: Take lettuce, carrots, purple cabbage and salad dressing. Mix them all up in a bowl. Then eat it.

Carrots by Madison Parsons: Get them out of the refrigerator. Put them in a bowl of warm water. Cook them for half an hour. Get them out and make your plate. Then eat them. But you have to pour the water out.

Green beans by Kari Moten: Pour water into green beans. Add butter. Cook them on the stove for five minutes.

Banana pudding by Jacob Collins: Flatten out the flour. Then put it in a bowl. Chop up the flour. Mix it up. Then cut bananas in it. Then I eat it.

Ham by Brady Rose: Take the ham out of the pack. Put it in the skillet. Then you fry it for three minutes. Take it out and eat it.

Apple pie by Brooke Bates: Get that silver stuff and lay it down on the table. Get biscuits and roll them out. Get apple butter and put it on the biscuits. Fold them together and use a fork to decorate the sides. Put it in the oven for 10 minutes. Take them out and then you eat them.

Brownies by Michael Hardin: Get a chocolate bar. Then let it melt. Then put it in your microwave for 10 minutes. Then you get it out then put it in the refrigerator. Let it freeze. Then when it is kind of soft, get a knife then cut it into little bitty squares. After it is square, put it on a glass plate. Then you just eat.

Pumpkin pie by Nikki Spencer: Carve the pumpkin. Put it in the oven for about two minutes and then you are finished.

Cheesecake by Lexi Johnson: Put flour in a pan. Then you put in the cake. And then the cheese. Mix it all up. Then you make it. Then cook it for 20 minutes. Then you get it out.

Turkey by Autumn Fields: You hunt it. Then you bake it for about 40 minutes. Then you eat it.

Apple pie by Shayla Hall: Put pie first. Then bake it for one minute. Get it out of the oven. That’s it.

Cranberries by Cameron Jones: Go to the Dollar Store and get some cranberry flowers. Go outside and dig a hole. Put them in the ground and water them. Pick them off the flowers. Bake them for five minutes. Then get a plate and shake the plate. Butter them. Put them back in the oven for 10 minutes. Get a plate and let people eat them.

Apple pie by Paige Collier: Put flour in apple pie. Bake it for four minutes. Put baking soda in and eggs. Then put some bread in it.

Salad by Makayla Venters: Put some lettuce, tomatoes, and some hot onions in a salad bowl. Put dressing.

Turkey by Nathan Brock: Just put it in the oven for 10 minutes. Eat it.

Pumpkin pie by Kaleb Adams: Get a tray and get some seeds and put it in it. Get something and mix it up and put it in the oven for nine hours. Eat it.

Corn by Shaun Slone: Put them in a garden. You pick them. Cook them for two minutes. Eat them.

Cornbread by Chloe Stidham: Milk. Mix it. Cook it for five seconds. Eat it.

Put some stuff in a bowl. Mix it. Put in some water. Eat it real fast.