That’s what friends are for

Here we go again: a tragedy in the music world, a tragedy waiting to happen that did. Disturbing headlines before and after leave us scratching our heads and asking why.

On the days before her death, Whitney Houston was disheveled, dressed in clothes that didn’t match, hair dripping with water or sweat, doing handstands by the pool, waving her arms erratically at a rehearsal, visiting doctors in Beverly Hills and even filling prescriptions at the Michael Jackson made-famous Mickey Fine Pharmacy. And yes, she checked in to the hotel with a large retinue.

Did they try to stop her? Or did they fill the prescriptions and stock the bar for her? Did they see her behaving erratically? Did they tell the doctors she was out of control? Did it occur to anyone that she belonged at Cedars-Sinai Medical Center and not at a rehearsal?

Jackson’s case was, perversely, easy because there was a doctor right there, a doctor whose job it was to keep him alive and who instead, according to the jury’s verdict, killed him. But Dr. Conrad Murray, guilty as charged, was surely not the only one responsible for that tragedy waiting to happen, even if he was the only one to meet the law’s definition. 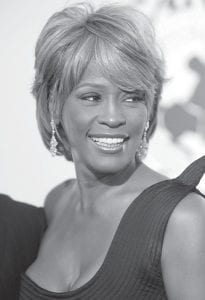 Singer Whitney Houston was photographed in October 2006 as she arrived at a charity ball in Beverly Hills, Calif. Houston died Feb. 11 at age 48. (AP Photo)

You never know. Anyone who has faced a friend or relative on a path of self-destruction knows how difficult it is to stop them — impossible, most often — and how easy it is to be a well-meaning but destructive enabler. You can’t just “tell” someone to stop, and you can’t make them. You can know that someone is a heart attack waiting to happen, you can beg them or threaten them, but you can’t make them put away the cigarettes or alcohol or drugs that prove you right. I used to plead with my father not to smoke, fearing he would die young, which he did — but not for lack of love.

Celebrities are even tougher, and their deaths can be tougher to swallow. They are surrounded 24/7. And many of those who surround them survive on their fame. The celebrity, however troubled, is still their ticket to the party, their paycheck, their identity.

Where is the retinue when you need it? Are they blinded by their own desire to be close, by their fear that standing up or walking away will leave them out in the cold? With all due respect to those who were there, who are no doubt suffering mightily (but not as mightily as the daughter who lost her mother and the mother who lost her daughter), it is hard not to wonder whether they might have done more, or less; whether this was a tragedy that could have been interrupted. In other businesses, we would call it a conflict of interest. In the entertainment business, it’s just a day of the week.

Somebody will make a lot of money from Houston’s tragic death. Actually, somebodies. The Grammys had a record audience, the magazines with her on the cover will sell out, the record companies and all the managers and agents and others who get a share of the proceeds of her sales will get a bigger share from record sales. Houston will be back in the Top 10. Her music sounds better than ever. Her memory will live on. But she won’t.

The news is full of reports about her daughter being inconsolable, and understandably so: an 18-year-old only child losing the only mother she will ever have. Perhaps those who couldn’t — or didn’t — take care of her mother will take care of her daughter. According to the news reports, she already has been to Cedars twice. If only her mother had.

Celebrity or not, there is a lesson here, a lesson for those who think, as Houston must have, they can cheat death, and for those who watch from the next room. A friend may not be able to stop a friend from self-destructing, but you certainly can try. And more than anything, you can refuse to stand by.

No one — not even a woman with a golden voice — is immune from the ravages of a soul in pain and the poisonous mix of drugs and alcohol. May Whitney Houston rest in peace, and may God bring comfort to those who mourn. ©2012 Creators