The age of sluggishness 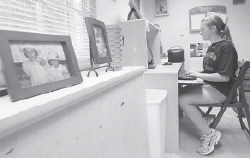 One of the largest studies of its kind shows just how sluggish American children become once they hit the teen years: While 90 percent of 9-year-olds get a couple of hours of exercise most days, fewer than 3 percent of 15- year-olds do.

What’s more, the study suggests that fewer than a third of teens that age get even the minimum recommended by the government – an hour of moderateto vigorous exercise, like cycling, brisk walking, swimming or jogging.

The sharp drop raises concerns about inactivity continuing into adulthood, which could endanger kids’ health throughout their lives, the study authors said.

“People don’t recognize this as the crisis that it is,” said lead author Dr. Philip Nader, a pediatrician and professor emeritus at the University of California at San Diego.

Inactivity is linked with greater risks for many health problems, including heart disease, obesity, high blood pressure and diabetes.

The new findings come just a week after an influential pediatricians group recommended that more children have their cholesterol checked and that some as young as 8 should be given cholesterol lowering drugs. That advice was partly out of concern over future levels of heart disease and other ailments linked to rising rates of childhood obesity.

The latest study, which appears in the Journal of the American Medical Association, tracked about 1,000 U.S. children at various ages, from 2000 until 2006.

Special gadgets were used to record their activity. Average levels of moderate-to-vigorous activity fell from three hours a day at age 9 to less than an hour at age 15.

Nader said he was “surprised by how dramatic the decline was,” and cited schools dropping recess and gym classes and kids’ increasing use of video games and computers as possible reasons.

The National Institute of Child Health and Human Development funded the research, calling it one of the largest, most comprehensive studies of its kind to date.

James Griffin, science officer for the study, said that as children mature, “You would expect somewhat of a decline (in activity), but nothing of this magnitude.”

He noted that the study coincided with the rise in popularity of video games, DVDs and Internet use – “all of the types of things that take children from outside and put them on a couch or in front of a computer.”

Griffin said the results send a message to parents that it’s important to teach their kids to balance computer time with more active pursuits, like walking the dog or playing sports.

The researchers tracked the children’s activity levels starting at age 9, using an accelerometer – a device about the size of a small belt buckle that attached to a belt around the waist and recorded movement. Activity levels were counted at ages 9, 11, 12 and 15 during the school week and on weekends.

That method isn’t foolproof because the device isn’t worn during swimming and contact sports. But the researchers said it’s unlikely that such activity happened often enough among the children studied to skew the results.

Through age 12, well over half the children got at least the government-recommended amount of activity every day. By age 15, less than one-third were that active on weekdays, and only about 17 percent were on weekends.

Boys were more active than girls at every age. But by age 15, even boys’ average activity levels fell short of recommendations, particularly on weekends.

The rapid drop-off in exercise by age 15 shows that the preceding years are “really an area we should target,” said Klein, who was not involved in the study.

The suburban Cleveland teen said she spends more time on the computer now than she did a few years ago, particularly with online social networking sites. She also didn’t have physical education class every day last year, and will only have it for half the upcoming school year in eighth grade.

Lee recently took part in a health program at Rainbow Babies and Children’s Hospital in Cleveland. The classes promote exercise and healthy eating.

She said she stays pretty active with volleyball and athletics, and has been able to avoid gaining weight with help from the program at the Cleveland hospital.

Making exercise fun is important, “because if you do, you won’t even realize if you’re exercising,” she said.

“It really helps and it makes you feel better about yourself,” she said.