THE AGONY OF DEFEAT 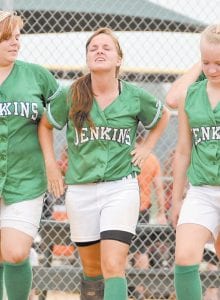 THE AGONY OF DEFEAT — Jenkins senior Sara Belcher was consoled by fellow team members after the Lady Cavaliers were eliminated from the state fast-pitch state tournament in Owensboro on Saturday, falling to North Laurel 16-6. When the sting of defeat is over, Belcher will have plenty to be happy about, as she will go on to play softball for Pikeville College, along with four of her teammates. (Photo by Chris Anderson) 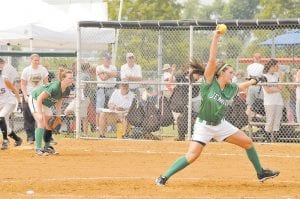 FIRE AWAY — Jenkins senior pitcher Brooke Webb fired in a pitch as teammate first baseman Sierra Kiser looked on in the Lady Cavs’ opening round game against Somerset in the girls’ fast-pitch state softball tournament in Owensboro. (Photos by Chris Anderson) 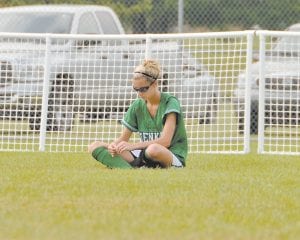 BREAK IN THE ACTION — During a pitching change in the Lady Cavs’ second game at the state tournament, center fielder Ali Goff relaxed in the outfield grass.