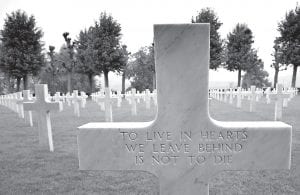 This recent photo shows an epitaph on the back of a headstone at the World War I Aisne Marne cemetery in Belleau, France. The World War I battle of Belleau Wood in northern France pitted untested U.S. forces against the more-experienced Germans, who were making a push toward Paris. It became a defining moment, proving the Americans’ military mettle and helping turn the tide of the war. (AP Photo/Virginia Mayo)

World War 1 started in 1914. Germany was a member of the Central Powers that were at war with Russia, Great Britain, France, and other members of the Allied Powers.

In spite of the United States’ declared neutrality, America shipped war supplies to Great Britain. In an effort to prevent war supplies from reaching its enemy, Germany sank as many ships as they could. Some of those ships were America’s. Eventually, the American public opinion shifted from that of neutrality to that of opposing Germany. On April 6, 1917, the United States declared war on Germany.

Germany became involved in the war on two fronts. The fight on the Eastern Front against Russia stalemated into a blood bath. Then the Bolsheviks, which gained power following the Russian Revolution of 1917, withdrew from the fighting and signed an armistice with the Central Powers. This freed the German troops that had been fighting the Russians on the Eastern Front to be transferred to face the Allied Forces on the Western Front.

This increased number of German troops on the Western front began to push back the Allied forces until the Germans were within 50 miles of taking Paris, France. Many historians speculate that had the Germans occupied Paris, the Allied Powers would have lost the war.

In desperation, the French asked Army General John J. Pershing, commander of the American Expeditionary Forces, to use his troops to stop the German advance. Up to this time, the American troops in France had been used mainly as support roles for the Allied Powers. They also had continued to receive combat training.

The German advance on Paris took them through Belleau Wood, a forest of old-growth trees that was used as a hunting preserve for rich Parisians. Although the American forces were inexperienced at combat, they were sent against the Germans at Belleau Wood, the American’s first large scale battle of World War I.

As the American Army and Marines rushed toward the front line, they met exhausted French troops retreating. The French officers advised the American troops to join them in their retreat. An American Marine is alleged to have said, “Retreat, hell! We just got here!”

On June 6, 1918, the Americans began their battle in earnest. As the Americans stormed across an open field to enter Belleau Wood, they faced machine gun fire from the Germans entrenched safely in the forest. The Americans, many of whom were mowed down early in the battle, suffered more than 1,000 casualties that first day. The American troops changed tactics, which included bringing in better artillery cover and using Marine marksmen to pick off the Germans from long range.

For the next three weeks, the Americans, backed by artillery, attacked the forest. The Germans fought back with machine guns, artillery, and poisonous gas. Finally, on June 26, 1918, the battle was declared an American victory.

But this victory came at an awful price: nearly 10,000 American casualties, including more than 1,800 killed. The U.S. Marine Corps suffered more casualties in that battle than it had in its entire history to that point.

The Germans were greatly impressed by the performance of the untested Americans. (Source: the website www.historyonthenet.com/battle-of-chateau-thierry/ with an excerpt from H.W Crocker III’s book The Yanks Are Coming! A Military History of the United States in World War I.)

German intelligence noted, “The Second American Division [Army and Marines] must be considered a very good one and may even perhaps be reckoned as a storm troop. The different attacks on Belleau Wood were carried out with bravery and dash. The moral effect of our gunfire cannot seriously impede the advance of the American infantry. … The qualities of the men individually may be described as remarkable.”

The Battle of Belleau Woods is significant in several ways. First, it is considered by many to be the turning point of World War I. With Russia out of the war, it seemed that there was little that could stop the Germans who were considered to be the most powerful military in the world. But the bravery, tenacity, and perseverance of the Americans at the Battle of Belleau Wood helped save the Allied Powers. The mighty German army was put on the defensive and World War I officially ended about four months later.

The Marines of 1918 were not the powerful combat ready Marines of today. Before World War I, the Marines were a relative small force who specialized in protecting U.S. interest abroad and providing security at military bases. They were often ridiculed because of their decorative uniforms and their security guard duties. Their effectiveness as a fighting unit was unknown, even doubted. But at the Battle of Belleau Woods, the Marines were front and center on the attacks on the Germans. These young, inexperience, under trained Marines took on Germany’s veteran military, battle hardened by four years of war, and pushed them back. The Marines had become a powerful fighting unit. The Battle at Belleau Wood is now an essential part of the U.S. Marine Corps history.

For years prior to World War I, America had preferred a policy of Isolationism. America preferred to solve its own problems and let all the other countries solve their own. As a result, the American military was woefully under prepared for war when World War I started in Europe. Once Congress began to embrace the war effort early in 1917, the American military had only a few months to draft and train soldiers, to make weapons, and to build ships, tanks, and airplanes. And to manufacture the much needed gas masks. The success of the inexperienced American troops who showed their mettle against the German war machine at the Battle of Belleau Wood laid the groundwork for America to become a world power.

Tony Blair is a retired school teacher living in the Jeremiah area.