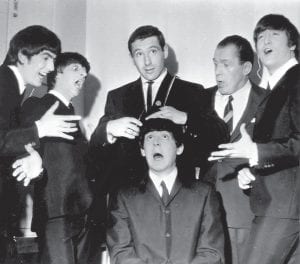 On February 7, 1964, Pan Am Yankee Clipper flight 101 from London Heathrow lands at New York’s Kennedy Airport–and “Beatlemania” arrives. It was the first visit to the United States by the Beatles, a British rock-and-roll quartet that had just scored its first No. 1 U.S. hit six days before with “I Want to Hold Your Hand.” At Kennedy, the “Fab Four” — dressed in mod suits and sporting their trademark pudding bowl haircuts — were greeted by 3,000 screaming fans who caused a near riot when the boys stepped off their plane and onto American soil.

Two days later, Paul McCartney, age 21, Ringo Starr, 23, John Lennon, 23, and George Harrison, 20, made their first appearance on the Ed Sullivan Show, a popular television variety show. Although it was difficult to hear the performance over the screams of teenage girls in the studio audience, an estimated 73 million U.S. television viewers, or about 40 percent of the U.S. population, tuned in to watch. Sullivan immediately booked the Beatles for two more appearances that month.

The group made their first public concert appearance in the United States on February 11 at the Coliseum in Washington, D.C., and 20,000 fans attended. The next day, they gave two back-to-back performances at New York’s Carnegie Hall, and police were forced to close off the streets around the venerable music hall because of fan hysteria. On February 22, the Beatles returned to England.

The Beatles’ first American tour left a major imprint in the nation’s cultural memory. With American youth poised to break away from the culturally rigid landscape of the 1950s, the Beatles, with their exuberant music and good-natured rebellion, were the perfect catalyst for the shift. Their singles and albums sold millions of records, and at one point in April 1964 all five best-selling U.S. singles were Beatles songs. By the time the Beatles first feature-film, A Hard Day’s Night, was released in August, Beatlemania was epidemic the world over. Later that month, the four boys from Liverpool returned to the United States for their second tour and played to sold-out arenas across the country. 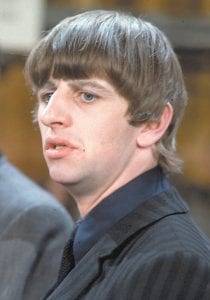 WITH THE BEATLES — This is a February 9, 1964 photo of Ringo Starr made backstage at the “Ed Sullivan Show” in New York. Starr is a member of the British rock band The Beatles, whose debut appearance on the CBS variety show that night helped them become the most famous rock band in world history. (AP Photo)

Later, the Beatles gave up touring to concentrate on their innovative studio recordings, such as 1967’s Sgt. Pepper’s Lonely Heart’s Club Band, a psychedelic concept album that is regarded as a masterpiece of popular music. The Beatles’ music remained relevant to youth throughout the great cultural shifts of the 1960s, and critics of all ages acknowledged the songwriting genius of the Lennon- McCartney team. In 1970, the Beatles disbanded, leaving a legacy of 18 albums and 30 Top 10 U.S. singles.

During the next decade, all four Beatles pursued solo careers, with varying success. Lennon, the most outspoken and controversial Beatle, was shot to death by a deranged fan outside his New York apartment building in 1980. McCartney was knighted by Queen Elizabeth II in 1997 for his contribution to British culture. In November 2001, George Harrison succumbed to cancer.