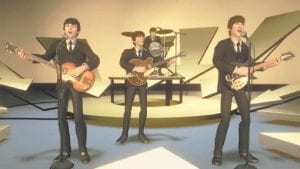 In this video game image released by MTV Games, a scene is shown from “The Beatles: Rock Band.” (AP Photo)

“The Beatles: Rock Band” has produced more buzz than any video game since the last “Grand Theft Auto.” When Paul McCartney and Ringo Starr took the stage at Microsoft’s Xbox press conference at E3 this summer, they were greeted with a standing ovation.

Gamers, then, already know and love the Fab Four, so the idea that “The Beatles: Rock Band” (MTV Games, for the Xbox 360, PlayStation 3, Wii, $59.99) will introduce their music to a new audience is nonsense. A more important question: Will the more technophobic members of the Beatles’ massive fan base finally be motivated to pick up a game controller?

In “Rock Band,” designed by Harmonix Music Systems, the controllers are ersatz guitars, drums and microphones. The object is to match the on-screen notes: If you see a green guitar note, you have to hold down the green fret and hit the strum bar. Drummers need to pound colored drumheads, while singers need to match pitch and phrasing.

The $250 Beatles premium bundle includes all the gear you need, but you can use instruments from previous “Rock Band” or “Guitar Hero” games. And if you have a few extra microphones, you can reproduce the band’s threepart harmony.

The game play is intuitive enough that just about anyone can join in, and the use of Beatles songs this time around makes it even more accessible. However, with only 45 tracks, not all of your favorites are here (no “Yesterday” or “Strawberry Fields Forever”). There are more tunes on the way, and before the end of the year, you’ll be able to download “Abbey Road,” ”Sgt. Pepper’s Lonely Hearts Club Band” and “Rubber Soul” in their entirety.

The initial track list, drawn from all the Beatles’ studio albums, smartly follows the arc of the band’s career. It begins with “I Saw Her Standing There” at the Cavern Club in Liverpool, England (the band first played a lunchtime session at the club in 1961), followed by gigs on “The Ed Sullivan Show” and New York’s Shea Stadium.

After the band stops touring in 1966, the music gets considerably more challenging. From the woolly psychedelia of “I Am the Walrus” to the ominous protometal of “Helter Skelter” to the minimalist blues of “I Want You (She’s So Heavy),” you get a musical outline of the band from its peak to its disintegration. (The band broke up in 1970.)

Without any concert footage to work from, the Harmonix animators illustrate the studio years with hallucinatory “dreamscapes.” ”Yellow Submarine,” for example, reprises images from the 1968 movie, while “Here Comes the Sun” transports the boys to an idyllic field.

It’s irresistible, even for those of us who preferred the Rolling Stones. And it could serve as a gateway for music lovers who have resisted the whole “Rock Band” trip.O

n the other hand, fans of the genre are likely to feel disappointed. Harmonix’s take on the Beatles doesn’t offer the depth of its previous games. You only get half as much music, and the linear story mode (you can whip through it in an afternoon) doesn’t offer the unpredictable, globehopping challenges of the tour mode in “Rock Band 2.”

Still, this is a first-class production that lives up to the high standards set by the band as well as the developers. It’s guaranteed to raise a smile. Three stars out of four.

On the Net: http:// www.thebeatlesrockband.com/