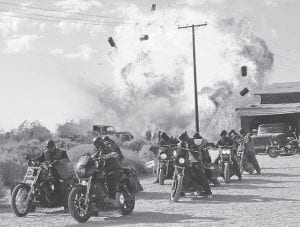 A scene is shown from the FX series “Sons of Anarchy.” (AP Photo/FX)

Maybe that’s one lesson to be drawn from TV in the year past. At least, nostalgia didn’t exactly pay off for the networks. ABC’s Kennedy-era drama “Pan Am” hasn’t soared in the ratings, and even with all the bunnies, NBC’s short-lived “The Playboy Club” was clearly missing a lucky rabbit’s foot, Meanwhile, ABC’s update of the 1970s hit “Charlie’s Angels” was instantly bedeviled by low ratings before its merciful demise.

This year, Charlie Sheen made a lot of noise, both on and off his (former) CBS hit sitcom, “Two and a Half Men,” while “60 Minutes” resident essayist Andy Rooney fell silent after 33 years on the CBS newsmagazine, delivering his 1,097th commentary in October, and passing away at age 92 in November.

Ratings-challenged NBC continued to hover near extinction this year, propped up largely by football. And as 2011 draws to a close, the network again demonstrates it’s willing to try anything: it has brought back the aptly named “Fear Factor” this month, five long years after that daredevil competition was first axed.

Fear and foolishness remain plentiful on the TV landscape. But in 2011 there were also moments of excellence and crazy distinction.

— For example, Ricky Gervais hosting “ The Golden Globes” (NBC). Thanks to his inspired — and, yes, occasionally scathing — stewardship, the Globes steered clear of the pretension and selfworship to which awards shows so often fall victim. And despite the big fuss about his performance (or maybe because of it), he’ll be back in 2012 for a third consecutive, surely-to-be-much-viewed hosting gig.

Here, in alphabetical order, are nine more examples of TV at its best in 2012.

— “Boomtown” (Planet Green), an absorbing documentary series about the people of Parshall, N.D. (population: 1,073) and the oil discovered deep beneath their feet, making some of them rich and leaving other neighbors stranded below the poverty line, where they already had been struggling for years.

— “Boss” (Starz) has rewarded Kelsey Grammer with one thing his fame and wealth couldn’t as the former star of “Frasier”: full credibility as an actor apart from that signature role as a radio shrink. Playing Tom Kane, the fiercely charismatic, ruthless mayor of Chicago, Grammer is both charming and chilling in a drama about the majesty and grubbiness of public service.

— “Breaking Bad” (AMC). Is there anything darker than black? If so, it was this drama series during its fourth season. Bleak, suspenseful, shocking and, at times, bitterly funny, “Breaking Bad” continued to chart the dark descent of Walter White (series star Bryan Cranston) from a middle-class Albuquerque, N.M., milquetoast to a virtuoso of the crystal-meth trade as he went mano-a-mano against his most formidable opponent yet, big-time drug boss Gustavo “Gus” Fring. And prevailed. Outrageously.

— “Enlightened” (HBO) has turned loose the rapturous Laura Dern in a comedy-drama about a damaged woman who sets her sights on social activism, and who is alternately inspiring and cringingly pathetic to behold as she attempts to change the world. This show’s scrambled heroine seems to pose the question: Is emotional stability required to spark a revolution — or is it possibly a stumbling block?

— “ Happy Endings” ( ABC). It’s a show about six attractive 20-something pals — three guys and three girls. No, it’s not “Friends” or countless “Friends” copycats. By virtue of sharp writing, rapid-fire pacing and a splendid ensemble of six comedic actors who appear to have been chummy for years, “Happy Endings” is its own hilarious thing. And who would have ever guessed that among the talented pack, Elisha Cuthbert — Jack Bauer’s constantly imperiled sexpot daughter on “24” — would reveal herself to be such a funny lady?!

— “Homeland” (Showtime). CIA agent Carrie Mathison is convinced that Marine Sgt. Nicholas Brody — rescued from a prison in Iraq, where he had been MIA since 2003 — is an instrument of an Al-Qaida plot to be carried out on American soil. Could this national hero really be an Al-Qaida terrorist turncoat? Or is Carrie obsessively stalking an innocent man? Claire Danes and Damian Lewis co-star in a suspenseful cat-and-mouse game where it’s teasingly unclear who is the cat and who is the mouse.

— “Lights Out” (FX) was the best new drama of 2011. Unfortunately, not enough viewers agreed (or even gave it a look). It aired last winter without landing a punch in the ratings, then, with its season finale (a wonderful cliffhanger) it vanished forever. Too bad. Starring Holt McCallany as prizefighter Patrick “Lights” Leary, this drama series was more than just another boxing story. It was a splendid tale about a husband and father who was torn between devotion to his family and a last-ditch try at a comeback in the ring. It was a love story and a thrilling action saga. It should’ve been a contender.

— “Skins” (MTV). It was a sexy, no-apologies slice of contemporary teen life. It was a sassy, gritty tour through teenage wasteland. And in the words of the Parents Television Council, which successfully targeted the show, even sight unseen, for execution, it was “the most dangerous television show for children that we have ever seen.” After a single ambitious season, it lives on, if only as a notch in the PTC’s belt.

— “Sons of Anarchy” (FX). It’s a brotherhood. A family. A pack of thugs. A pocket of the struggling working class. This saga of a small-town motorcycle club is colorful, unflinching, often bloody — and oddly relatable in the age of Occupy Wall Street. Smart writing keeps this bunch routinely at the edge of oblivion, while the viewer roots for them to succeed, no matter how depraved their game plan. Like so many Americans (and presumably many viewers of this hit drama), the Sons are members of the 99 percent, just trying to hang on.