The blues are coming to Whitesburg 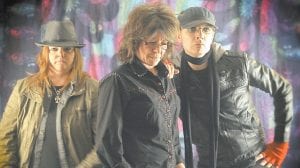 The Kelly Richey Band of Cincinnati is touring nationally in support of its new album, Sweet Spirit, which is scheduled to be released in early March. The tour will stop at Summit City in Whitesburg on Saturday (Feb. 23). Joining guitarist Richey (center) in the blues-based rock band are new drummer Jyn Yates (left), a native of Columbia, Ky., and new bassist Chris Sherman, who is known professionally as “Freekbass” and is considered among the top “funk bassists” performing today.