The bombing of Khobar Towers 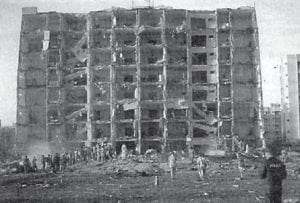 Nineteen airmen died and hundreds were injured in the terrorist attack June 25, 1996 at Khobar Towers in Dhahran, Saudi Arabia. At the time, it was the worst terrorist attack against the American military since the bombing of a Marine Corps barracks in Beirut, Lebanon in 1983. (Department of Defense photo)

On the night of June 25, 1996, near Dhahran Air Base, Saudi Arabia, terrorists positioned a tanker truck filled with explosives less than 100 feet away from a building in the Khobar Towers Complex that housed deployed airmen. Shortly before 10 p.m. local time the bomb detonated, killing 19 airmen and wounding an estimated 400 others.

The terrorists had backed the truck into a parking lot directly in front of Building 131, just beyond the fence, wire and concrete barriers surrounding the Khobar Complex. The explosion left a crater 16 feet deep and 55 feet wide, and completely sheared off the front half of Building 131.

The adjacent building, 133, was also hit hard. Everyone was saved in 133 except one civil engineer.

The Khobar Towers bombing was the catalyst for important changes that directly affect how civil engineers build and maintain facilities that airmen live and work in today.