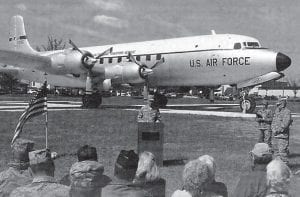 These aircraft saw service all over the world to countries such as Libya, Nigeria, Greenland, Brazil, Guam, Turkey, and New Zealand, to name a few, during its years at Travis.

The C-118 pictured most notable legacy is that Sgt. Elvis Presley returned to the U.S. from Germany for discharge on this aircraft.

This aircraft is a restoration project and will be in ‘like-new’ condition.

In the 15 years I served with the Military Air Transport Service, I flew to many countries and state-side bases as an additional crew member. I was on the first flight the C-118 flew to Ha- waii, Wake Island and Japan, and returned.

It was so much nicer than the ‘Gooney Birds’ I had been flying on.

The restoration project started in October 2009, and many retirees who had previously flown on the airplane, assisted in various ways, including scraping paint from the historic aircraft.

The restoration was completed this year.