The Cats really had nothing to fear

When the NCAA Tournament pairings came out, I noted on social media that there was nothing in the South Region that should scare UK — which was coming off a SEC Tournament title.

Immediately I had my sanity questioned because Virginia, Cincinnati, Tennessee and Arizona were the top four seeds in the region. However, I didn’t trust Arizona’s defense and Virginia’s offense — and both went out on in the first round. Tennessee is good — but UK beat the Vols in the SEC title game and could have gone 3-0 against Tennessee. The Vols lost in round two. Cincinnati — how could anyone really believe they could be a NCAA factor — blew a 22-point lead with 11 minutes to play to lose to Nevada in round two. It’s the first time the top four seeds in any region did not have at least one of the four make the Sweet Sixteen.

It’s like the basketball Gods helped make up for what Calipari has felt have been extremely difficult brackets in recent NCAA tourneys. 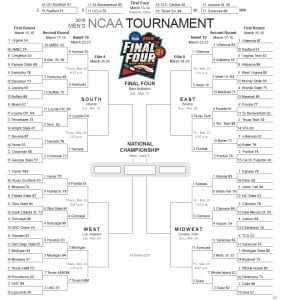 Kentucky did what it should have done last week — beat Davidson and Buffalo. It’s also in position now to do what John Calipari said it could after it lost in mid-February to Auburn — reach the Final Four.

“We love when people doubt us. Just gives us more fire. It’s great for us to see everybody hating on us on Twitter and stuff like that,” Kentucky freshman P.J. Washington said. “It’s great for all of us to be the underdog for once and just play with nothing to lose and play for Big Blue Nation.”

Kentucky is doing that and could not ask for a better setting than to be in Atlanta where it will play Kansas State Thursday. Nevada plays Loyola-Chicago, which won at Florida during the regular season before knocking out Miami (Fla.) and Tennessee in NCAA upsets. Kentucky fans love Cat-lanta and the Big Blue Mist should be all over the city.

Here’s another stat for you to savor: Wenyen Gabriel was only the second Kentucky player ever to have a double-double coming off the bench in a NCAA Tournament game when he had 16 points and 12 rebounds against Buffalo. The first one was Heshimu Evans against Duke in that historic comeback win for UK in 1998 — and the Cats won the national title that year.

Calipari has had other teams work some March magic. However, he left no doubt after the second round win over Buffalo what this team has meant to him. He said it had been his “most rewarding season” as a coach. He’s dealt with a key injury to Jarred Vanderbilt. Another injury kept Jemarl Baker from playing all season. Quade Green missed games with a back injury.

That’s because freshman Kevin Knox says this is why players come to Kentucky.

“You want Cal to help get you ready for the next level (NBA), but you also want to compete for a national championship,” Knox said. “He’s the best at both. You know that and just have to trust he’ll get you where you want because it seems like he always does.”

Kentucky signee Keldon Johnson will be playing in the McDonald’s All-American Game March 28 in Atlanta. But that will just be the start of his all-star experience.

The 6-6 guard has also been invited to play in the Jordan Brand Classic and Nike Hoop Summit. Players who get invited to all three games are the best of the best and Johnson’s father, Mike, says the family feels blessed by the honors.

“Keldon works really hard and he deserves all of that,” his father said. “I am just as proud as I can be of him. I know playing in the Mc- Donald’s game was always one of his goals. He always wanted to be known as one of the best players in the nation. He loves to get honors so it will show that hard work pays off and that he is one of the best kids in the 2018 recruiting class.”

Johnson transferred to Oak Hill Academy in Mouth of Wilson, Va., this year after playing at Huntington (W.Va.) Prep. He’s ranked among the nation’s top 10 players and is averaging 22.1 points, 6.8 rebounds and 4.4 assists this season.

“He stayed with a host family at Huntington that was really good for him,” Mike Johnson said. “After last season he said, ‘Dad, I am thinking about going to Oak Hill.’ I told him there was not really much to do at Oak Hill but he loves basketball and wanted to play a major schedule.

“He always felt he was underrated. He felt if he could play a major schedule he could show his talent and I think the year at Oak Hill has been really good for him.

“It has never been just about scoring for him. He will get down and play defense. If you score on him, he will take it personal.”

Getting a verbal commitment from 2019 five-star player D.J. Jeffries of Mississippi was a big plus for John Calipari. It gives him an early five-start commitment in his 2019 class and Jeffries is also good friends with James Wiseman of Memphis, the top player in the 2019 class and a UK recruiting priority.

“He’s a great player. He’s got a nice jump shot. He’s a good all around player,” Jeffries said.

They both have played on the same AAU team coached by former NBA star Penny Hardaway, which could now present a problem for UK landing Wiseman.

“It’s a blessing for me to play with one of the top players in the country but I also think I do my part to push him to get better,” Jeffries said. “I would love to play in college with him. I am trying to get him to lean that way, but you never know for sure what he is thinking. But I know no matter what, I’m coming to Kentucky.”

He’s been a head coach since 1991 at Tulsa, Georgia, Kentucky, Minnesota, Texas Tech and Memphis.

Smith is one of the more caring coaches I’ve ever been around and my buddy, NBC Sports Philadelphia anchor Amy Fadool Kane, can vouch for that with this story from years back when she was working at WKYT-TV in Lexington and Smith was coaching at Kentucky.

“Memphis officials didn’t value his talent and commitment, and thought the grass must be greener (somewhere else). They’ll be wrong, too,” Kane said. “Here’s a story that is very telling of who Tubby Smith is as a person. I could tell you about him personally honoring his $1 million pledge to build spaces for Lexington city children to learn computers and programming after he was fired by UK. But this one is something I witnessed.

“It was Thanksgiving Day and I was working my first job … just out of college … with a skeleton crew. We did our 6 p.m. news. It was me in sports, Valeria Cummings anchoring news, and Chris Bailey for weather. I’m signing off sports at the desk and say, ‘I guess it’s time to eat Thanksgiving dinner’ just joking. Valeria laughs and says, ‘I hope you brought extra coins for the vending machine.’

“We all have a good chuckle and wish folks a happy holiday and say we’ll see them at 11 (for the news).”

About 45 minutes later there was a knock at the station door. Kane recalled the station looking like a “mansion type house” on Winchester Road and remembers only about three other people working at the time of the knock. Someone answered the door and in came Tubby Smith and his wife, Donna, along with sons Saul and Brian carrying huge trays of turkey, stuffing, sweet potatoes, green bean casserole, biscuits and more.

“Donna tells them where to put it in our newsroom and we’re all standing there aghast,” Kane recalled. “Donna simply looks at us and says, ‘Tubby and I were watching you just now (on the news) and we couldn’t bear to think of y’all not eating a proper Thanksgiving dinner. So I asked him what we should do and he said, ‘Let’s take them our dinner.’ And that’s what they did. That’s Tubby Smith.”

South Carolina coach Frank Martin, never one to mince words, was distraught when he learned Smith had been fired.

“What a sad day in our business when such an accomplished coach like Tubby Smith is asked to step away from his Job after his second year and winning 21 games. I’ve met a lot of men in this business. Few are as genuine, with high morals and character who coach his butt off,” Martin said.

Remember former Kentucky big man Daniel Orton who was recruited by Billy Gillispie and often had his disagreements with John Calipari?

He’s been gone from Kentucky almost eight years but is still playing professional basketball. He’s back playing in Lebanon for the second time and has played for 17 different teams in Europe, Asia, Latin American and the Caribbean. He’s played in the G League.

“At the end of the day, this is my job, this is what I have to do,” Orton said in an interview with theringer.com. “This is what I chose to do, so you can’t be too upset about it. You can’t complain too much, you’ve just gotta go. If I wanted to do something else, I’d quit. It’s just … this is what I want to do.”

Quote of the Week: “Shai Gilgeous-Alexander has become appointment television. Doesn’t have the same pedigree of Rose, Evans, Wall, Knight, or Fox, but still destined for the lottery,” CBS-TV sports analyst Jon Rothstein after the UK point guard’s 27-point game against Buffalo

Quote of the Week 2: “The last two nights are why I love March Madness. Congrats to all the lower seeds that are surprising everyone but themselves. We need these opportunities in college football,” Troy football coach Neal Brown, the former offensive coordinator at UK, after the opening round upsets in the NCAA.