The closeness of brothers 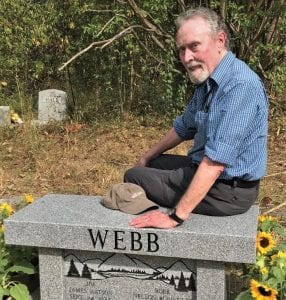 Robb Webb, the retired “voice” of CBS-TV’s “60 Minutes,” was photographed recently at a memorial held in Whitesburg for his late brother, Jim Webb.

I’ve always felt that brothers or sisters share a special connection that goes deeper than parental relationships. Why is that so? There is less authority of one family member over the other. Secrets are shared and punishment is rare; they are more or less in the same boat. When a woman loses her sister or a man loses his brother, it’s like losing part of oneself.

These thoughts have lingered over the past few weeks, since I attended a memorial tribute held in Whitesburg to honor Jim Webb, who passed away on October 22, 2018. In the photo that accompanies this column we see Jim’s older brother, Robb Webb, whom I have known since the day he married Pat De Rousie in 1990. Pat organized a graveyard ceremony to honor the passing of Jim. Brother Robb gave a speech at a gravesite high on a hill with a stunning view of the surrounding Kentucky mountains Jim cherished so much. Jim lived atop Pine Mountain near Whitesburg at the time of his death.

Robb spoke about the closeness he shared with his younger brother, and it was very moving. “My little brother Jim came along when I was six years old. I was eager to be a big brother, and when he was big enough, I taught him how to throw a football and how to whittle. I remember marking the shape he wanted to carve on the piece of wood, and showing him how to carefully shave it down. I even offered to coach his baseball team, even though he was always much better at baseball than I.”

Robb continued in his deep baritone voice. “My brother was funny from an early age, drawn to puns and Pogo. He wrote from an early age, too. I was impressed with his writing and his poetry, and I always figured that would be his calling, so it was no surprise when later in life he quit teaching to write full-time. Along the way, he added radio to his artistic arsenal. Radio and writing provided outlets for his humor, his exuberant creativity, and his radical love for the mountains and its people.”

The Webb brothers’ lives intertwined with their love of radio. Robb pursued a career studying radio and TV production at Ohio State. Later he enlisted in the Army, as he was about to be drafted. While in The Armed Forces Radio & Television Service and stationed in the mountains of Ethiopia and Eritrea, he was assigned to direct and perform at the base radio and television station. After the Army, his radio career took him to Texas and California.

In the late 1960’s Robb began acting in plays at an amateur theatre in San Antonio. He was one of a group of 12 actors who started The Billboard Theatre in a renovated restaurant building that overlooked the San Antonio River. He commented, “I acted in many plays, and it became a very important part of my life.”

After a couple from the Alley Theatre in Houston, watched Robb perform in “Barefoot in the Park,” he was asked to audition for work with the Alley Theatre. He was hired to be in the acting company and to take photographs at a salary of $120 a week. Photography had been an early interest of Robb’s.

Two plays into the first season at Alley Theatre, they asked Robb if he would like to join the union and become a full-fledged Equity member and he did. “I worked very hard at the Alley Theatre and had never taken an acting class in my life. By the time the second season ended I decided to move to New York and immediately began taking acting classes.” The rest is history.

Although only a few dozen of my readers have actually met Robb Webb, I guarantee that all of you have heard his mellifluous voice. Before he retired a year ago, he was the announcer for “60 Minutes,” and he was the voiceover for several TV ads and NFL documentaries. He also narrated skits for the “Late Show with David Letterman.”

Two brothers, Jim and Robb Webb, have had remarkable careers, and as I listened to Robb’s gravesite tribute to his brother, there was love in the air. I felt my eyes welling up with tears as we sang “Amazing Grace.” It was a moving moment in the Kentucky mountains.

Ozzie Tollefson lives in Minnesota and is remembered for creating The Lone Driver, which was aired years ago on Jim Webb’s program over WMMT-FM in Whitesburg. Robb and Jim Webb are sons of the late Watson Webb, former Letcher County Schools superintendent.