The county seat from above 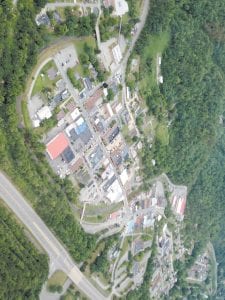 Turn this page sideways and you’ll have a bird’s eye view of downtown Whitesburg as seen courtesy of a medical transport helicopter operated by Jenkins-based Wings III Air Rescue. The photo shows the county seat from the edge of Fields Cliff to the west to a portion of the Upper Bottom neighborhood to the east. It also demonstrates the constraints to growth that have faced the Main Street area as the result of the immediate downtown being located between the banks of the North Fork of the Kentucky River and steep hillsides elsewhere. The campus of the former Whitesburg High School is also seen.