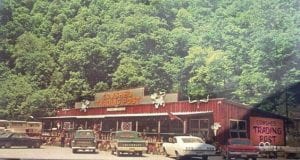 A 1970s photo of the Cowshed Trading Post at Isom.

As mentioned here last week, good friend, Whitesburg native and retired Air Force fighter pilot Captain Mike Majority and I stay in frequent email contact with each other. After traveling and being stationed at military bases throughout much of the world, Mike, his wife, April, and their, now grown-up, college student daughter, Robin, have lived in South Carolina for most of the last two decades.

After I put out a recent call for column fodder suggestions, Mike has sent over half a dozen and they are still coming. I hope that Captain Mike realizes that I am printing them out and saving them in a three-ring binder and that I will be using them throughout the foreseeable future.

This week’s blade of Mike fodder was generated when we began reminiscing about weekend vendors who used to set up shop right beside the road on KY Highway 15 as it passed through the little Letcher County town of Isom, back in the late 1950s until the early 1970s.

At that point in time, anybody traveling from southeastern Kentucky to Whitesburg had very few choices in routes, if they didn’t want to drive smack dab, through the middle of Isom. Weekend traffic through Isom was slow and heavy in those days. Flea market and novelty business was brisk and lucrative. You could find anything from padded bras to used bicycle pumps, used shoes to old shotguns, kerosene lamps to carbide lights, comic books to Christmas ornaments and everything in between.

Then, about 1970, Highway 15 was reconstructed so that it bypassed downtown Isom. Weekend traffic that had previously crawled and frequently stalled, through Isom, now whizzed by, on the backside of town, at 55 miles per hour, unless it was paused at the railroad crossing. Shortly after traffic deserted the little town, so did the weekend vendors.

One of the vendors, arguably everyone’s favorite and most successful, was Luther Johnson, a former coal miner, who lived on Goose Creek near Neon Kentucky. In 1963 Luther’s wife, Golda, a teacher, spotted him an investment of $300 to build inventory. Golda was apparently as anxious for her husband to escape the dangers of underground mining as he was. During the week, Luther spent his time purchasing wholesale imports, factory items and any other “novelty” he thought might turn a profit. Peddling his wares out the back of a station wagon and, later, a covered, pickup truck parked beside the old livestock auction yard, his business literally boomed.

In 1971, soon after traffic through downtown Isom had dwindled to nearly nothing, Luther built a new 100X50 foot building out beside the “new highway/ bypass”. Constructed of mostly rough, sawmill lumber and painted red, the building boasted large signs, on each end and across the front roof, proudly identifying the place as “THE COWSHED TRADING POST”, a throwback to the old stock sale days.

Luther and Golda moved from Goose Creek into an apartment on one side of the building. Business went from weekends to seven days a week and customers never knew until they got there what they’d find next. It might be a load of rubber boots, coveralls, silk pajamas, transistor radios, sheets, blankets, quilts or chenille bathrobes. How about a genuine, 6X8 foot velvet Elvis or a gold-framed, backlit 16 X 20 inch portrait of Jesus? The Cowshed always had those in stock along with deeply discounted radios, eight-track tape players, CB radios and almost any kind of electronic device.

A Facebook reader recently told me that his dad purchased a clock from Luther in 1984 and the clock was still running as good as ever.

During Christmas shopping season, almost anyone could purchase firecrackers, cherry bombs, Roman candles, bottle rockets and other fireworks, if Luther knew who they were. You had to ask and you might have to wait a few minutes, until the place wasn’t busy, before your order was located and filled.

Luther passed away in 1991 and, soon thereafter, another business had THE COWSHED torn down and replaced with a more modern gasoline station/ convenience store/restaurant that is still thriving, to this day.

In addition to Captain Mike Majority, I want to express heartfelt thanks to former Letcher Countians, Lena Adams Campbell of Lexington and Janet Meade Johnson of Bybee/Waco, KY, for supplying much the factual information in this column. Janet is Luther and Golda Johnson’s daughter in-law.