The day they tore the school down 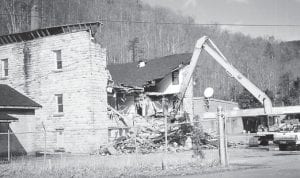 THE KINGDOM COME SETTLEMENT SCHOOL was torn down in the 1990s. The roof had collapsed after a snowfall.

I’m sending out a lot of loving wishes and thoughts to friends and loved ones whom I keep in my memories of years past.

I’m just sitting here listening to the rain fall on the roof and it brings back good thoughts of the past and the people I knew as I grew up, and went to school and church with as a child and teenager and my young married years and all of the 60 years since.

It has been a beautiful January. Several hills and bumps in the road, but I have been able to climb up and over them so far. Some of the places were pretty treacherous and hard to pull out of, but I have made it and I’m still climbing upward, reaching for what I’m reaching for.

I’ll make it one day in the future because I have a wonderful, faithful guide leading the way and He will never let me walk alone. If I’m not able, He will carry me with Him (Jesus).

I just got word that a dear friend and schoolmate has been found dead at his home at Partridge. He is Brother Harvey Creech. This news was very sad to hear. I was a senior at Kingdom Come High School in 1948-49. Harvey was a freshman. So he was quite a big younger than I was.

He had always cherished the old school and had helped to get groups of people to come for reunions in the last few years. He enjoyed that gathering so much last October.

Harvey met his beautiful wife at Kingdom Come, Shirley J. McNulty. He married her and they raised four lovely children. He loved to go to Whitesburg High School to watch his sons play all kinds of sports. He then later became an Old Regular Baptist minister.

He lost his wife several years ago. He sure did hate to lose her. He loved her so dearly. He had grieved all these years for her. Now he is with her I pray.

Also, a neighbor, Provy Cornett, died during the last week of January. I used to know him slightly when I was a teenager. He never did marry. His sister Opal was my typing teacher, also her husband Ira Whitaker. I loved them both. Then they moved to Indiana.

Then news also came of the death of a cherished and remarkable doctor, Milo Schausser of Benham. He was respected and loved by many people in the area.

He was a man of many talents in his years at Benham Hospital. He was a surgeon, a regular doctor, a baby deliverer, and bone doctor. He could do most anything that anyone needed. He did house calls in his earlier years. Just a phone call away, and he’d be on his way. When he retired, he was missed so much by all his patients.

He loved Kentucky and made his home at Benham even though he was from up north. When he came to work for the hospital, for International Harvester Coal Co., he wanted to stay here for home and he did.

God bless and comfort his family in their loss. We all loved him, too. I can almost hear his famous giggles as he walked the hallways at the hospital and the clinic at Lynch, where he worked after the hospital at Benham closed.

He retired at a late age from the clinic. He lost his wife Ruth after that, and he missed her so deeply. He played a lot of golf and was proud of the Benham Schoolhouse Inn.

Well, you won’t believe this, but it is true. I’m going to get a reunion on the way for all the people that attended the Kingdom Come Settlement High School and also the grade school. I’m hoping to get as many as can be here on Memorial weekend, May 28, beginning at 10:30 a.m. and going until everybody gets ready to leave.

There will be a big dinner at around 2:30 p.m. and cost will be $10 per person. It will be at the Linefork/Kingdom Come Community Center and home of the Cedar Grove Opry Music Hall, Linefork. Linefork

I’m sorry I don’t know everyone’s address or I would send invitations to each of you. Would everyone that knows someone else that went to school there let them know about it?

The sweet memories of our old stone building will forever be etched in our minds and hearts. It was a wonderful, special place here on Linefork when the doors opened on the first day of school in 1928. The young people of that day were so proud and so blessed and so thankful.

They were thankful for the gift that the Methodist Church and Mr. John D. Huff made possible. John D. donated the nine acres of land for the school and the cabin for the principal and students who boarded there.

Here is a sad picture, the day they tore the school down. It was drizzling rain and dark clouds made it worse. I stood there watching my husband Claude look at the mess, and I was crying as the first sweep of the big backhoe pulled the roof and part of the stones to the ground. The school had been there for 70 plus years, a landmark. The stones were hewn by some of the best stonemasons in this area, Woodard Cornett, Charlie Ingram, my father-in-law, Hiram Ingram and some of their friends I don’t remember.

Clarence Huff was a young man of John D.’s family. He was 15 or 16 years old, and he told me he hauled the rocks from the places they cut them from the cliffs on his dad’s sled with a team of big mules. He would also go to Cumberland across Pine Mountain to get cement and other supplies.

Oh! What stories Clarence could tell. I miss talking with him so much.

I’ll be looking for letters from all who are planning to attend the big reunion of all time on the Linefork waters. Make reservations early so we will know how and what to cook and who to look forward to.

So long, I’ll write again soon. Let me hear from all.