The Drifters will headline 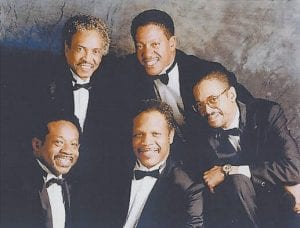 BENNY ANDERSON AND THE DRIFTERS

The Drifters, featuring long-time member Benny Anderson, are coming to Jenkins next week to cap off the Jenkins Homecoming Days Festival.

The festival will begin in Jenkins on August 20. The musical highlight is expected to occur when Benny Anderson and The Drifters take the Jenkins City Park stage at 9 p.m. on Saturday, August 25. The concert, which is free to the public, is being sponsored by Jenkins Community Hospital, TECO, Mountain Heart Center (Dr. Chandrashekar), Whitaker Bank, and the city.

The Drifters were formed in 1953 and started their careers as a trend setting rhythm & blues group. The group first hit the top 40 with the 1959 single “There Goes My Baby.” The song went to No. 2 on Billboard’s Top 40 and established the group’s popularity. Several hits followed, such as 1960’s “Save The Last Dance For Me,” which reached No. 1 on Billboard’s Top 40 chart, where it spent 14 weeks. The group, fueled by the vocals of the late Ben E. King, continued the successful run with hits such as “Up On The Roof,” “On Broadway,” and the unforgettable “Under The Boardwalk.”

Anderson has been a member of the Drifters since 1962. His band mates include David Wilson, George Wallace, Ernell Hill, and Andrew Odem.

The concert is one of many activities planned for this year’s festival. The festival is the same city-sponsored event that is held each year on the last weekend of August. Additionally, the festival will conclude with a Civil War Skirmish at the Little Shepherd Amphitheatre on Sunday, August 26.

For 2007, many changes have occurred in the organization and management of the festival. Festival committee members say the word Homecoming was added to the title to reflect the committee and community’s desire for a more family friendly event. Some of the activities include; a carnival by Casey’s Rides, a cake walk, horseshoe tournament, a motorcycle show at the Jenkins Mini Park, tours of the Old Jenkins High School, a quilt show and contest at the Jenkins Branch of Whitaker Bank, a photo contest at the David A. Zegeer Coal-Railroad Museum, an art contest at the Jenkins Public Library, a parade, food booths, and performances by several local bands.

Persons wishing to compete in the quilt, photography, and art contests are being asked to submit their entries on Monday, August 20. Cards listing the participant’s name, address, and telephone phone number should be attached to the entries. All entries will be judged and prizes awarded on Friday, August 24. Winners will be announced on the City Park stage later that evening.

The Jenkins Homecoming Festival Committee is sponsoring a parade through downtown Jenkins on Saturday, August 25.

Persons wishing to be in the parade should contact City Hall or call Pauletta Sexton at 832- 2711.

The festival’s theme for 2007 is “All Roads Lead Back Home.”

More information on the festival is available by visiting the city’s web site at www.ci.jenkins.ky.us or by calling (606) 832-2141.