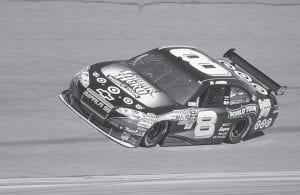 NO MORE NO. 8 — Driver Aric Almirola prepared for the NASCAR Daytona 500 auto race in February. When Earnhardt-Ganassi Racing suspended operations on Almirola’s team, it ensured there won’t be a No. 8 on the track this weekend for the first time in 10 years. (AP Photo)

When Earnhardt-Ganassi Racing suspended operations on Aric Almirola’s team, it ensured there won’t be a No. 8 on the track this weekend for the first time in 10 years.

That falls squarely on Teresa Earnhardt.

She could have cashed in when the number was hot, and Dale Earnhardt Jr. was willing to fork over a decent chunk of change to take the 8 with him to Hendrick Motorsports. Instead she set a price so high, it figured Junior and Rick Hendrick would never meet her demands.

The number was important to the Earnhardt family. Although it was used by 86 different drivers from 1949 until Almirola’s final ride two weeks ago at Texas Motor Speedway, it had become as much a part of the Earnhardt legacy as was the elder Earnhardt’s feared No. 3.

Ralph Earnhardt used the number in 51 NASCAR starts, and his son, Dale, made his Cup Series debut with the number in the 1975 Coca-Cola 600. It was Dale Earnhardt’s only Cup race using his father’s number, and it bounced around to multiple drivers for the next two-plus decades.

But when Earnhardt Jr. was ready to go Cup racing, he wanted his grandaddy’s number.

Stavola Brothers Racing had used the No. 8 with very limited success for 14 Cup seasons, but left it idling when the team left NASCAR following the 1998 season. Dale Earnhardt Inc. grabbed it for Junior, and he made his calculated Cup debut behind the wheel of the No. 8 at the 1999 Coca-Cola 600 — 24 years after his father’s debut in the same race.

A year later, it had grown to one of the most recognizable numbers in NASCAR.

Earnhardt Jr. made 291 starts in the No. 8, winning 17 races and the Daytona 500. He became synonymous with the number, and his die-hard fans eagerly emblazoned everything from ballcaps to body parts with his slanted red 8.

So when he left for Hendrick following the 2007 season, it was natural that he wanted to take the 8 with him.

She wanted the number back when Earnhardt Jr. was done with it, and it was a reasonable request he might have agreed to. But she also demanded a percentage of the licensing revenue, and agreeing to such a giveaway would have been a ludicrous business decision.

So Hendrick and Earnhardt Jr. walked away from the number that had come to define NASCAR’s most popular driver, and instead brokered a more reasonable deal with team owner Robert Yates for the No. 88.

Earnhardt Jr. held his tongue despite his disappointment. He instead set out to start a new brand with the No. 88, and leaving his old number behind actually gave him a clean break from the difficult dealings he’d had with Teresa Earnhardt since she took charge of DEI after Dale Earnhardt’s 2001 death.

It didn’t take long for Teresa Earnhardt to learn the number had no value without Earnhardt Jr. behind the wheel.

Budweiser didn’t want to continue sponsoring the car without him, and Teresa Earnhardt’s executive management team was unable to find new funding. So she moved Mark Martin and sponsorship from the U.S. Army to keep DEI’s flagship No. 8 afloat.

Although Martin was a fine choice to fill the seat, his merchandise revenue was a monstrous drop-off from what DEI had been pulling in from Junior.

Then DEI deteriorated quickly last season, and when the Army pulled its sponsorship at the end of the year, both the No. 8 and the entire organization were in jeopardy of collapsing.

A late November merger with Chip Ganassi Racing saved Teresa Earnhardt’s NASCAR interests, but it was too late for the No. 8. She sent that team to Ganassi without any sponsorship and, in this poor economic climate, no real hope of finding anything that could guarantee the car would stay on the track this season.

EGR tried for four months to keep the team afloat without secure funding, but there’s not much new money floating around NASCAR right now and Almirola’s tough start to the season didn’t help.

So the Cup series will go to Phoenix International Raceway this weekend without the No. 8. Earnhardt Jr., who has a deep respect for NASCAR history, will notice the absence.

No telling if Teresa Earnhardt even cares.