The fight against deadly skin cancer 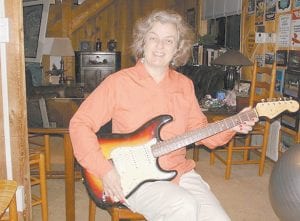 The deadliest form of skin cancer is a little-studied type you’ve probably never heard of. After he died, Martin Whatley’s classic rock ‘n’ roll guitar became his last weapon against it.

Whatley’s frustrated widow carefully pulled the pristine 1964 Fender Stratocaster from under their bed and put it up for auction on eBay, pledging half the proceeds for Merkel cell carcinoma research and the rest to pay his medical bills. She knew scientists were having little luck finding money to study a killer so rare that few doctors recognize it, much less know how to treat it.

“It’s one thing to give a donation. But I was thinking if I did it on eBay, so many people saw eBay, maybe it would make some people out there think about bumps that they had,” and seek help sooner, says Dana Martin Whatley of Austin, Texas. (Yes, husband and wife shared the name Martin).

She wound up donating $15,000 last year to the University of Washington – not where her husband was treated, but where Merkel cell authority Dr. Paul Nghiem is struggling to collect samples of patients’ tumors to unravel genes that fuel the cancer.

Merkel cell carcinoma provides a poignant glimpse of the desperate intersection of research dollars and the suffering wrought by rare diseases.

It’s a cancer only recognized as distinct from melanoma – even more aggressive, and needing different treatment – about 15 years ago. Diagnoses have tripled to about 1,500 a year.

Here’s the rub: The first sign is a painless bump, often reddish to purple, that can resemble a benign cyst, confusing even dermatologists about whether a biopsy’s needed. But Merkel cell carcinoma spreads rapidly once that bump appears. A third of patients die in three years, double melanoma’s mortality.

Yet there have been no wellcontrolled studies of the best treatment. Intense radiation is key – unlike melanoma, Merkel cell carcinoma seems unusually radiation-sensitive, says Nghiem (pronounced Nee-ahm). There is no evidence that adding chemotherapy right away helps, and it may even worsen patients’ chances, he adds.

Only last month was the first comprehensive report on symptoms and risk factors published. It almost exclusively hits Caucasians, over age 50, on sun-exposed skin. And while a weak immune system greatly increases risk, most patients, puzzlingly, have normal immunity.

Then in January, University of Pittsburgh scientists announced they’d discovered a previously unknown virus lurking inside Merkel cell tumors, a virus that just may be the cancer’s trigger.

“If we’d had funding, we could have done this easily five years ago,” says lead researcher Dr. Patrick Moore.

Despite earlier success discovering another cancer virus, Moore couldn’t win government money for the Merkel cell research and spent years cobbling together dollars to do it. The next step, also so far unfunded, is to create a blood test for this “Merkel cell polyomavirus,” to see how common it is and why it only rarely harms.

Indeed, for two decades, Merkel cell research has depended on small pilot grants and family fundraising like Whatley’s, says Nghiem. Recently, he won what is believed the disease’s biggest research grant to date, $840,000 from the American Cancer Society.

“There’s no money invested in finding a cure because there’s no profit margin, there’s so few patients,” says George Campbell of Charleston, S.C., who founded a Google-based support group for Merkel cell patients after his 2005 diagnosis.

But belt-tightening today cuts across all diseases. The National Institutes of Health’s budget has been essentially flat since 2003, which a recent report found equal to a 13 percent drop if medical inflation is counted.

Meanwhile, a small fraternity of Merkel cell patients has banded together to push education, of doctors and the newly diagnosed – both to help them navigate the frightening treatment maze, and to urge them to donate tumor-tissue samples to Nghiem’s lab.

“The time it takes, the research, there’s just not an awareness of this at all,” says Keith Boyer, 72, of Burlington, Iowa, whose Merkel cell hasn’t returned since radiation two years ago.