The first air conditioner for cars 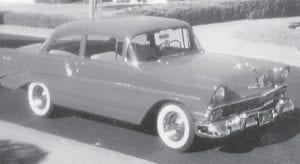 THIS ’56 CHEVY BEL AIR belonging to Everett Vanover is in ‘mint’ condition.

During and after my military career I loved old classic cars. My hobby was going to old car swap meets and buying old cars and fixing them up, driving them for awhile, and selling them for a lot more than I paid for them. Some of the cars I drove for years.

I bought a 1949 Cad for $50 and drove it for 15 years and sold it for $4,000 when I retired from the military. I drove it cross country from California to Jenkins and back three times.

It sat in the yard of my wife’s sister at Pound, Va., for the three years I was in Germany. When I came home and checked that old car out, I raised the hood and a squirrel had built its nest on top of the engine. I had a heck of a time cleaning it up and getting it running again.

My first car with air conditioning was a 1947 Pontiac that I drove from New York to my assignment in California after the war. It had a two-foot long cylinder attached to the top of the passenger door with a screen at the front.

When you stopped for gas, you bought a block of ice and put it in the cylinder. As you drove on a hot day, the wind would blow cold air into the partly opened window. That was the first air conditioner for cars.

The cars I liked most were the ’55 and ’56 Chevys. I’ve had many of them over the years. I had four of five of them in my garage and yard, working on them at the same time. One of the best things about old cars is you don’t have to smog them.

I’ve belonged to the Klassic Uniques 1957 Chevy Club for over 50 years. I drove a 1957 Bel Air Chevy four-door sedan with factory air for over 20 years to 36 states and Hawaii.