The first mentions of Neon 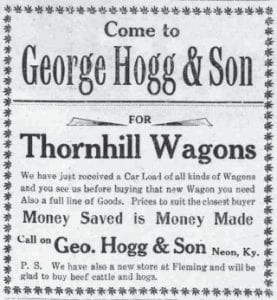 Ad above appeared November 6, 1913 in The Mountain Eagle.

When the annual Neon Area Days festival is held next week (Sept. 12-14), the town that began as a shopping center for residents of coal camps in Letcher County will mark its 100th year of existence.

Seen on this page are two of the first mentions of Neon as taken from the pages of The Mountain Eagle that are still around. The ad for wagons for sale in the upper left appeared in November 1913 and marks the first mention of the new town that we could find.

Below, lots were being advertised for sale on the front page of The Eagle’s January 29, 1914 edition.

At bottom left, more lots had become available for sale to the public by the time the paper’s July 15, 1926 edition hit the streets. 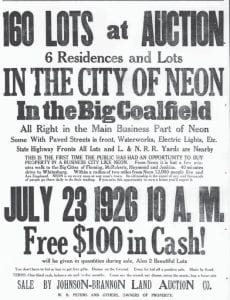 This ad from July 1926 shows Neon was still growing after 12 years.