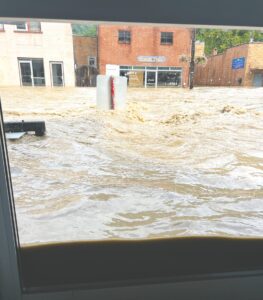 About the photo … Taylyn Combs Kincer, an employee of Mountain Comprehensive Health Corporation’s Central Office in downtown Whitesburg, decided she better go check on the building after hearing it was in danger from waters from the flooding North Fork of the Kentucky River. After entering a back door on the top floor, Kincer walked downstairs and found herself facing turbulent waters roaring down the street in front of the building. “It was terrifying,” said Kincer, who snapped the photo at 11:14 a.m. “It was two feet higher on the outside and I was waiting for it to bust in. … I just prayed the Lord would let me get back out.” The central office building is one of several owned by MCHC that were heavily damaged by last week’s record-setting flash flooding. (Photo by Taylyn Combs Kincer)

Three people died in Letcher County and an untold number were left homeless as a direct result of flooding last Thursday.

According to officials, Clarence, 79, and Crystal Jewel Sturgill, 64, of Eolia, a married couple who worked as custodians at Letcher County Central High School died when their truck was swept off a bridge at Ermine, just across from the high school driveway.

Betty Jean Estep, 67, of Isom, died of an apparent heart attack while trying to escape flooding near her home at Stampers Branch.

Dozens of others were rescued from trees, rooftops, cars and flooded rooms as the North Fork of the Kentucky River and its tributaries and Elkhorn Creek in the Big Sandy River watershed jumped their banks and swelled to historic proportions.

Across eastern Kentucky, 37 people lost their lives in the flooding July 28 and hundreds, perhaps thousands, were left without homes. The day of the flooding, 23,000 people were were left without electricity. The largest outage was in Letcher County, where 7,000 lost power. As of Tuesday evening, a little more than 200 remained without power in Letcher. Many homes remain without water. 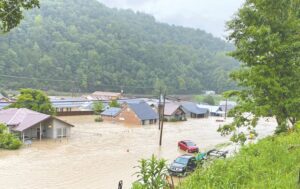 Teresa Collins of the Upper Bottom neighborhood in Whitesburg took this photo last Thursday morning as floodwaters were busy ruining the interiors of every home in the neighborhood’s lower section. The same street is shown below in a Mountain Eagle photograph taken Tuesday.

As the week has progressed stories of horror and heroism have materialized across Letcher County, from people rescuing neighbors in jon boats and kayaks to citizens swimming across swollen creeks to save people caught in the flooding.

In Mayking, “Till noon, it was all volunteers,” County Attorney Jamie Hatton said.

And Hatton does not mean volunteers for rescue squads alone, he means volunteers who simply took it on themselves to save someone. Among those volunteers was Hatton himself, who along with other volunteers rescued 17 people and nine pets Thursday morning, first in a jon boat and kayak and then in a Bass Tracker. Six people were plucked off a porch near the school board’s central office, and he picked up another five – three children and their grandparents – in the bass boat. Still more were picked from the second stories of their homes in the Upper Bottom. 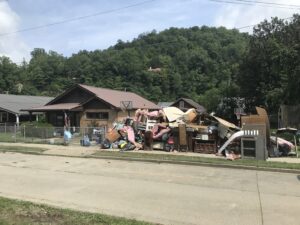 Upper Bottom resident Libby Fields Honeycutt is grateful that rescuers were able to remove her sister, Evelyn Fields-Cosgriff, from her home across the street after she suffered what turned out to be a light heart attack during the flood.

In a Facebook post, Honeycutt, whose home was heavily damaged as well, said she “first and foremost” needed to thank “Charles (Red) Cauldwell, Paul Vacario, Chris Adams and Misty Conaster for rescuing my sister from her home (and) Donnie Adams and Byron Thomas for fighting the water to get the door open to see if my sister could be successfully evacuated.”

Evelyn remains in the Whitesburg ARH Hospital, where her condition was improving.

Judge/Executive Terry Adams said he was awoken at 4:30 a.m. by the sound of rushing water near his home, which sits on a hill beside KY 15 on Garner Mountain at Isom. When he looked outside, a river was rushing past his house, fed by runoff from the mountains. He had no cell phone signal, and did not have a county radio. One road out was blocked by water. Another had trees come crashing down as he watched and they were washed under the steps of an apartment he owns near his home. 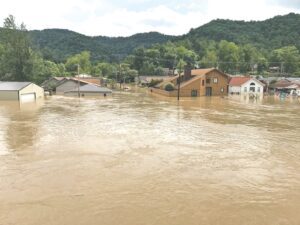 Pictured above is another photo showing floodwaters from the North Fork of the Kentucky River in the Upper Bottom neighborhood in Whitesburg. Below, the flash-flooding was so fierce it easy lifted truck trailers and other large objects and sent the down creeks and rivers. Much of the debris was caught by bridges. (Eagle photos)

When he finally got to the main highway, his mother’s house was surrounded by water, and his twin brother was up to his neck in water, trying to get her out. Rockhouse Creek, he said, was coming under the guardrail on KY 15.

“Who would have ever thought we would have to a water rescue beside Highway 15?” Adams said.

Adams said he tried to get to the county garage at Mayking, but couldn’t make it past Letcher County Central High School, where the North Fork of the Kentucky River had flooded the highway in chest-deep water. There, he said, he heard screaming and there were two men hanging onto a tree yelling for help. 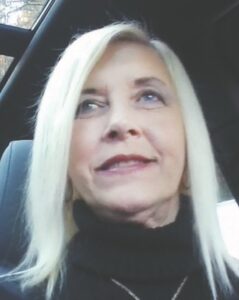 Betty Jean Estep, 67, of Isom, died of an apparent heart attack while trying to escape flooding near her home at Stampers Branch.

Adams said it was a gut-wrenching scene and he tried to step across the guardrail to throw a rope. Truckdrivers whose rigs were stopped in the road tied him to the railing with a strap from a flatbed truck and together they were able to get a rope to the men. The younger one tied the rope around his waist, grabbed the older man around the waist and Adams and the truckers pulled them to shore. He said the last 30 feet, both men were under water as the current forced them down.

In the afternoon on Thursday, rescuers began arriving from all across Kentucky with airboats, Zodiacs like those used by Navy SEALS, and plain bass boats. One rescue crew’s boat was flipped over by the force of the river, and another was unable to move into the channel because the current was too swift. Overhead, Blackhawk helicopters from the Kentucky National Guard and Tennessee National Guard, and smaller helicopters from air ambulance companies and the Kentucky State Police circled overhead, searching for victims. 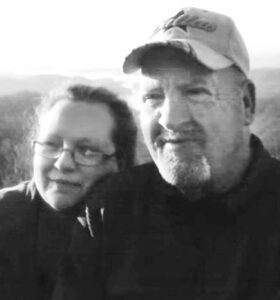 Clarence, 79, and Crystal Jewel Sturgill, 64, of Eolia, a married couple who worked as custodians at Letcher County Central High School died when their truck was swept off a bridge at Ermine, just across from the high school driveway.

Local people on jet skis and in boats worked along Main Street in Whitesburg to pick up people from flooding buildings, and in Mayking, a neighbor in a kayak plucked a young woman and her dog off the roof of her house.

And the outpouring of support has not just been from people in Letcher County. People have come from all across Kentucky, from Tennessee, Ohio, West Virginia, Virginia, Minnesota, South Carolina, Oregon, and possibly other states to help, bringing clothes, water, cleaning supplies and personal items. Tractortrailers have arrived loaded with relief supplies, and on hand to unload them were whole families from here in the county who were not hit by the floodwaters and volunteered to help their neighbors.

In McRoberts, Sheriff Mickey Stines commandeered an excavator parked by a power company contractor and neighbors who knew how to operate it built a bridge to replace the one washed away in the flood, using the culverts that had been swept down the creek.

“The people in McRoberts, the community, not me, built a freakin’ bridge in two and half hours,” he said. “The citizens took it upon themselves. It was their idea.”

Stines said the citizens did all the work, and that he just stayed to make sure no one gave them any trouble for using the excavator without the company’s permission.

“We talked to the company this morning, and they said they understood, they would have done the same thing,” Stines said Saturday.

John Barker was also involved in a rescue of five neighbors in McRoberts after he and Ronnie Barker, Debby Burke and others formed a human chain in neck-deep water to reach a trailer that was about to be washed away in the flood.

“You can’t let your neighbor die,” said John Barker. “She didn’t want to go, but I said come on, or I’ll take you by the hair. She came then,” he said. “I’m lucky. I lost my vehicle and 75 feet of my yard, but we got our neighbors out and we were blessed to do that.”

Adams said situations where citizens took it upon themselves to rescue people and clean up flood damage have played out all across the county, and continues now.

“It’s not just been one person, it’s been everybody,” Adams said.

He singled out the Letcher County Board of Education for providing space for the relief effort and the emergency operations center, and State Rep. Angie Hatton, who he said has been “phenomenal.” Hatton, whose brother is the county attorney, has spent the week working on relief efforts and getting information to citizens and government officials outside the county who can help.

“We’ve got the best county in Kentucky,” Adams said.

In Jenkins, country music singer Tyler Childers was helping clean up debris, and Senate candidate Charles Booker came from his home in Louisville to bring water to Whitesburg and helped disburse supplies at the high school. Gov. Andy Beshear toured the area on Monday.

On Tuesday, country music singer Chris Stapleton, like Childers, made and unannounced surprise visit to check on volunteers and flood victims at Letcher County Central High School at Ermine.

By Tuesday, the Federal Emergency Management Agency was on the ground in Whitesburg to help residents sign up for assistance, and stacks of water and other supplies lined the sidewalks at the high school. Organizations across the county are providing free meals, and temporary housing is expected to begin arriving soon.