“Just amazingly proud to live a dream right now,” Skinner said after the win. “Validation of our talk is huge. I am just so thrilled for our current players who believed so much in us.”

One of those players who believed was All-American setter Madison Lilley, the national player of the year. She came to Kentucky talking about winning a national title her freshman year.

“Welcome to the bandwagon everyone,” Lilley said after the championship win. “We have been on it. Volleyball school.”

Lilley knows not everyone took her seriously when she talked about a national championship as soon as she got to Kentucky.

“It might have been cute as a freshman (to say it) but we knew it was going to happen and that’s what makes this all the better,” Lilley said. 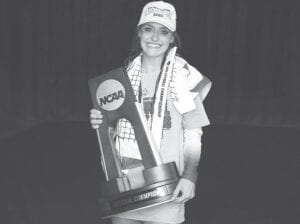 She carried the national championship trophy into the welcome home celebration at Memorial Coliseum and that seemed only fair since she had 53 assists and a career-high 19 digs in the national title match.

She averaged 13.8 assists per set in five NCA wins and had six service aces. The senior also averaged 3.35 digs per set and hit above .300 in all five tourney matches.

Lilley was almost giddy addressing fans in Memorial Coliseum at the celebration. She talked about how proud she was of the team and staff but also appreciative of the fans.

“We got to play for BBN in Omaha and felt the love,” Lilley said. “It was the coolest thing to see Memorial Coliseum packed last night (for the NCAA title game watch party). That means a lot.”

Lilley also predicted this won’t be the end of UK volleyball success.

“It (a national title) has been a long time coming. We are here and we are not stopping. I am so proud of this program,” she said. s

Landon Young is not sure when he may hear his name called during the NFL draft this week but he’s confident after his Pro Day workout that he’s going to get drafted.

The University of Kentucky offensive lineman has his weight at 315 pounds like NFL teams wanted and has indicated he’s able and willing to play either tackle or guard position.

“This is all business now. You are going to compete for a job where you play against the best in the world,” Young said. “How many people get to say they go to a job every day and absolutely love that job.

‘But at the end of the day you are competing against a guy trying to feed his family. You have got to say I want your incoming, I am taking your job and this job is mine now.”

Young said he’s been told about the “rookie wall” that first-year players hit after being used to a 12- game college season with maybe a bowl game compared to a 17-game NFL schedule plus exhibition games and playoff games along with offseason camps.

“It’s easy to hit that rookie wall mentally,” he said. “You have got to be mentally right to go through a whole season going against the best players the world. You are not going where the game is not going to be challenging.” s

It was just over three years ago that Kenneth Horsey Jr. felt a pain in his side and had to be rushed to an emergency room where it was discovered he had a growth on one of his heart valves. He had open heart surgery April 8, 2018 — just a few weeks before he was scheduled to report to UK on a football scholarship.

Horsey persevered and was named one of the three 2020 Mayo Clinic Comeback Player of the Year Award winners by The College Sports Information Directors of America (CoSIDA). He’s become a regular in the offensive line at guard and now has his goal set to become an all-SEC performer during the 2021 season.

Horsey, a Florida native, said he’s still not at a point where his mother does not worry daily about him.

“I think they would agree that they would not have let me come up here if they did not trust the coaches and staff and trainers with my health and well being, and I feel the same way,” Horsey said. “We all completely trust the University of Kentucky to do what is best for me and that’s what they have always done.

“It just about us having that faith in them and them having that respect for that. But they have all been great for me since day one and now I want to get bigger, stronger and faster so I can have an even better year coming up.”

One plus for Horsey has always been his faith. But he says that did not just start with his heart problem.

“This has brought me closer to God and definitely increased my faith and also opened my eyes to some things,” the junior lineman said. “It has helped me mentally to mature and see more things.

“When you can’t do things physically, it gives you time to think about your goals, where you want to be, how you are going to get there. I know what I want and trust God to get me there. But my faith in God has always been there. I just think that faith has grown stronger the last three years.” s

Kentucky volleyball coach Craig Skinner prides himself on recruiting not only talented players but also players who care about others.

“You can’t recruit chemistry but you can recruit people who understand the bigger picture and will be happy for other people. If you recruit selfish people, you’ve got a problem,” Skinner said before UK’s national championship match with Texas.

Stumler averaged 4.82 kills and 2.35 digs per set and had the championship-clinching kill to earn all NCAA All-Tournament Team honors.

“When I came to college I really had no idea what I wanted to do,” Stumler said. “I loved kids and giving back to people. I was thinking maybe teaching or social work. I took classes in both but I loved teaching and the more I got into classes, the cooler I thought it would be to have a role in so many lives.”

She’s now an elementary education major and believes she can be the same positive role model in a classroom she is on the court.

“As a teacher you spend more time in a day with a kid than the parents do,” Stumler said. “I am going to take great pride in having students of my own and raising them.

“I have had teachers shape what I think, how I think. It’s similar to what a coach does for you. I love giving back to people any way I can. I can always be a positive person just like I try to be on the court.”

Tharp, Stumler’s roommate, has the same passion with kids and is a special education major.

“In high school I got randomly placed for a service project helping students with special needs,” Tharp, a key defensive specialist and server for UK, said. “Getting involved then made me realize I wanted to impact their lives any way I can.

Quote of the Week: “We are not supposed to lose a young man like this with so much ahead of him this early. I do not question God why things like this happen, but I also don’t have the capacity to understand how it does. I just know that I wish it were me and not him. His life was in front of him. I have had a good run,” Kentucky coach John Calipari after the death of Terrence Clarke in an automobile accident last week.

Quote of the Week 2: “Walking in the hallway he is a gentle giant. He is an ambassador of what all students should embody. Between the lines it is a totally different thing. When he puts a helmet on, he flips a switch and he just rolls,” Johnson Central assistant coach Justin Arms on Johnson Central offensive lineman Grant Bingham, a UK commit.

Quote of the Week 3: “If you were told you had to go into a fight 2-on-1 every single day, it wears on you. When you command double teams, that is what that position entails and it is not for everybody,” University of Kentucky defensive coordinator Brad White on playing nose guard in the Southeastern Conference.