The high cost of fighting cancer 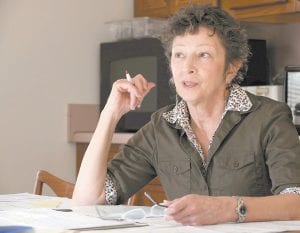 Patti Tyree sits in front medical bills spread out on her kitchen table in Salem, Va. She was afraid that cancer would steal her future. Instead, the cost of treating it has. (AP photo)

Patti Tyree was afraid that cancer would steal her future. Instead, the cost of treating it has.

She had hoped to buy a small farm with money inherited from her mother. But copayments for just one $18,000 round of breast chemotherapy and one shot of a nearly $15,000 blood-boosting drug cost her $2,000.

Bills for other treatments are still coming, and almost half of her $25,000 inheritance is gone.

“I supposedly have pretty good insurance,” said Tyree, 57, a recently retired federal worker who lives near Roanoke, Va. “How can anybody afford this?”

Forty years after the National Cancer Act launched the “war on cancer,” the battle is not just finding cures and better treatments but also being able to afford them.

New drugs often cost $100,000 or more a year. Patients are being put on them sooner in the course of their illness and for a longer time — sometimes for the rest of their lives. The latest trend is to use these drugs in combination, guided by genetic tests that allow more personalized treatment but also add to its expense.

It’s not just drugs: Radiation treatment is becoming more high- tech, and each leap in technology has brought a quantum leap in expense. Proton therapy is one example — it costs twice as much as conventional radiation and is attracting prostate cancer patients despite a lack of evidence that it is any better.

The financial strain is showing: Some programs that help people pay their bills have seen a rise in requests, and medical bills are a leading cause of bankruptcies.

Insurers also are being squeezed by laws that require coverage and restrict raising premiums. And the burden is growing on Medicare, which in some cases is paying for treatments and tests that have not been shown to benefit patients.

Why have costs escalated so much?

To some extent, it’s the price of success.

Cancer deaths have been declining in the United States since the early 1990s. Two out of 3 people now live at least five years after a cancer diagnosis, up from 1 out of 2 in the 1970s, according to the American Society of Clinical Oncology, doctors who treat the disease. Nine out of 10 women with earlystage breast cancer are alive five years after their diagnosis and are probably cured.

Modern treatments have fewer side effects and allow patients to have a greater quality of life than chemotherapy did in the past. But they are far more toxic financially.

Of the nation’s 10 most expensive medical conditions, cancer has the highest per-person price. The total cost of treating cancer in the U.S. rose from about $95.5 billion in 2000 to $124.6 billion in 2010, the National Cancer Institute estimates. The true tab is higher — the agency bases its estimates on average costs from 2001- 2006, before many expensive treatments came out.

Cancer costs are projected to reach $158 billion, in 2010 dollars, by the year 2020, because of a growing population of older people who are more likely to develop cancer.

That’s the societal cost. For individual patients, costs can vary widely even for the same drug. Dr. Bruce Roth, a cancer specialist at Washington University in St. Louis, tells of Zytiga, a prostate cancer medicine approved last year. It costs $6,100 a month and insurers differ on how much they cover.

“I’ve had one patient pay $1.50 copay a month and another patient be quoted $ 5,943,” Roth said. Now whenever he hears about a promising new cancer drug, he worries it will be another case “where finances end up determining who gets it.”

Tyree, the woman from Virginia, said the hospital billed her insurer $14,865 for Neulasta, a shot to boost white blood cells and help her tolerate chemotherapy. Several cancer specialists said Neulasta usually costs less than half that amount, but the charge was $12,000 for Tyree’s friend and blog postings by other cancer patients tell similar stories.

The worst part: A much cheaper alternative is available — a different formulation of Neulasta — but many patients aren’t offered that option. There’s even a cheaper way to get Neulasta, but hospitals make a lot of money giving the shot instead of teaching a patient or a caregiver how to do that.

Tyree said doctors told her Neulasta was “completely routine and everybody got it.” She had no idea how much she and her insurer would have to pay for it until the bill came.

A recent American Cancer Society survey found that one-quarter of U.S. cancer patients put off getting a test or treatment because of cost, the group’s chief medical officer, Dr. Otis Brawley, writes in his new book “How We Do Harm,” which discusses costs and argues for more rational use of health care. One out of 5 survey respondents over 65 said they had used all or much of their savings on cancer care.

The burden hits hard on the middle class — people too well off for programs that cover the poor but unable to afford what cancer care often costs.

Dr. Amy Abernethy, director of the cancer care research program at Duke University, did a study of 250 such patients from around the country. Most were women with breast cancer, including Tyree. All but one had insurance, and two-thirds were covered by Medicare. The vast majority also had prescription drug coverage.

Their out-of-pocket expenses averaged $ 712 a month for doctor visits, medicines, lost wages and travel to appointments. To pay for cancer drugs, half spent less on food and clothes, and 43 percent borrowed money or used credit. Also, 26 percent did not fill a prescription, 22 percent filled part of one and 20 percent took less than prescribed.

“Patients don’t just have cancer, and that’s becoming more and more of a problem” because they also are struggling to buy medicines for heart disease, diabetes and other conditions, Abernethy said.

The challenge will grow as the newest trend in cancer care takes hold: using the new, gene- targeting drugs in combination. There has been limited success using them one at a time — they tend to buy a few more months or a year or two of life but usually are not cures.

“Almost certainly we will have to use multiple drugs” to shut down all of a tumor’s pathways rather than just the main one attacked by a single drug, said Dr. Allen Lichter, the oncology society’s chief.

Ironically, “one of the answers to making cancer therapy more cost-effective is to find these targeted agents” and use genetic tests to narrow down which patients really benefit instead of giving them to everyone with a particular type of cancer, Lichter said. For example, the new lung cancer drug Zalkori targets a gene that is present in only 5 percent of lung cancers, but it helps 60 percent of those patients.

Here’s where things get sticky. Desperate patients often demand treatments that have a very small chance of helping them. And many doctors feel they have a duty to offer anything that might help, regardless of the cost to insurers and society, said Hassett, the policy researcher from Boston.

An example is the outcry over the government’s recent withdrawal of approval of Avastin for breast cancer. Studies showed the drug did not improve survival for most women and there are no biomarkers to identify the few it does help. Many doctors and patients still want access to the drug, and Medicare is still paying for it.

But denying “useless” treatment isn’t just about saving money — it’s about avoiding harm and false hope, Brawley writes in his book. “A rational system of health care has to have the ability to say no, and to have it stick,” he contends.

Cost can still be a concern long after initial treatment. Many breast cancer patients take medicines for five years to prevent a recurrence. Tyree, the woman from Virginia, is about to start on one of these, Arimidex. It is newer and somewhat more effective than tamoxifen, a medicine long used to prevent cancer’s return, but it is also more expensive.

If insurance covers only part of it, “I’ll have to pay,” Tyree said. “And I don’t have any idea how much it is.”