‘The Hollows’ is much more than a murder mystery

By GENINE BABAKIAN
The Associated Press 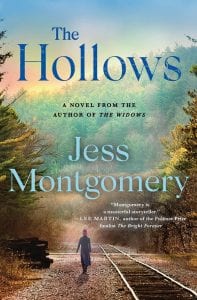 This cover image released by Minotaur shows “The Hollows” by Jess Montgomery.

In the opening of “The Hollows” by Jess Montgomery, sheriff Lily Ross is called out of her home late at night to investigate a mysterious death. The body of an elderly woman – barefoot and in her nightgown – is found battered near the Moonvale Hollow Tunnel – a stretch of railroad track once used by abolitionists to ferry escaping slaves to freedom.

Set in 1926 in the western foothills of the Appalachian Mountains in southeastern Ohio, “The Hollows” is much more than a murder mystery. It weaves racial integration, labor organizing in the Appalachian coal mines, prohibition and women’s rights throughout the narrative, set against an authentic backdrop crafted by Montgomery’s careful attention to historic detail.

The story unfolds through the eyes of two main characters. The first is Lily Ross, a fiercely independent young widow who has assumed the county’s sheriff position left vacant by her husband’s death. Inspired by Maude Collins, Ohio’s first woman sheriff — appointed in 1925 — Lily made her debut in “The Widows” — the first of Montgomery’s Kinship mystery series. “The Hollows” is the second in the series.

Lily’s oldest friend, Hildy Cooper, unravels the other half of the narrative. While Lily Ross is confident and determined, Hildy is indecisive and unsure of herself. Even her friends see her as weak and in need of a man to give her life some structure. Yet when Hildy discovers the identity of the victim, she is determined to prove her mettle, risking her life and her sanity to help Lily find the missing pieces of the puzzle. Yet Lily often leaves Hildy out of the equation, seeking the skills of Marvena Whitcomb, a moonshiner and union organizer who also made her debut in “The Widows.”

Like sheriff Ross, Marvena Whitcomb defies convention. She advocates for safe working conditions for coal miners, eschews social mores about marriage and supports racial integration in a county where many are secret KKK supporters. Set just six years after women gained the right to vote, Lily and Marvena are more the exceptions to the rule than the norm. But they are too quick to discount the inner strength of Hildy.

Admittedly, the evolution of Hildy’s character may sometimes appear painstakingly slow, but in the end she proves – to herself as much as to others – that she is just as strong as these powerful female role models.

Beef Up Your Menu with a Trendy Twist on SushiRecipe for healthy heartStones tix on sale Wed., Fri.