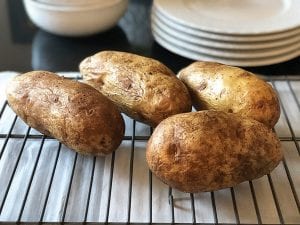 To make your baked potatoes perfect, preheat the oven to 350 degrees Fahrenheit and place a sheet of heavy-duty aluminum foil on the bottom shelf of the oven in case any of the juices drip. After washing and drying the potatoes, coat them with either a little regular Crisco shortening or olive oil. Then prick them four or five times with a fork to let steam escape while they are baking. After an hour of baking, stick the end of a paring knife into the potato to gauge its doneness. It generally takes another 20 minutes to be perfect, but it depends on the potato’s size. (Elizabeth Karmel via AP)

A fluffy baked potato is a glorious thing, but too often you slice into the potato and it is shiny and waxy, not light and creamy in texture.

Baking a potato is the easiest thing in the world, right? Then why are so many potatoes lacking in texture and flavor?

First, for the traditional baked potato that is going to be loaded with toppings, you must buy a Russet potato. Russets have a thicker skin and a beautiful starchy, snowy — almost meaty — interior that soaks up all your butter, cheese and sour cream. I love making smashed potatoes with red new potatoes or baby Yukon gold potatoes, but only a Russet will do for a “baked potato.”

For my latest cookbook, “Steak and Cake,’’ I tested several popular ways of baking potatoes. I have friends who swear by wrapping the potato in foil before baking. I have always baked the potato without the foil, but I tried both ways. I baked them at 350 degrees Fahrenheit and at 400 degrees too. The potatoes took a bit longer to bake at 350 but they were fluffier, and had a better crust and interior texture. Generally, when you cook anything at a higher temperature, the outside gets done before the inside. That means you risk an overdone exterior by the time the interior is cooked through. Potatoes are no exception. That’s why I prefer a lower temperature. But if you like to bake your potatoes at a higher temp, do so. It is all about what works.

The potato wrapped in foil was waxy and had a hard texture even when fully cooked. The foil also prevents the skin from become crusty, which I think is the best part of a baked potato.

If you are a fan of twice-baked potatoes, you have to bake them unwrapped or the skin/shell will be too soft to re-stuff.

When I bake potatoes, I preheat the oven to 350 degrees Fahrenheit and place a sheet of heavy-duty aluminum foil on the bottom shelf of the oven in case any of the juices drip. After washing and drying the potatoes, I coat them with either a little regular Crisco shortening or olive oil — both work well. Next, I prick them four or five times with a fork to let steam escape while they are baking. Sometimes, I sprinkle them with a little salt to add to the skin’s flavor, but it doesn’t affect the interior. I place the potatoes in the center of the oven, directly on the oven rack set over the foil. Drips are generally not an issue for Russet potatoes, but they are a big issue for sweet potatoes, which I bake exactly the same way.

After an hour of baking, I stick the end of a paring knife into the potato to gauge its doneness. It generally takes another 20 minutes to be perfect, but it depends on the potato’s size.

A little tip for those who like to make twice-baked potatoes: Always bake three potatoes for two finished potatoes, so you can mound the filling over the top. I make them often for dinner parties since they are best made in advance and re-heated just before serving.

Elizabeth Karmel is a grilling, barbecue and Southern foods expert, and the author of four cookbooks, including the newly released “Steak and Cake.” Her website is www.elizabethkarmel.com.

Good Housekeeping magazine’s slimmed-down take on this Sunday-morning favorite is practically saintly. Subbing in low-fat milk and egg whites gives it half the fat and a third less cholesterol than traditional French toast. Plus, it’s a cinch to whip up. One more blessing in disguise: You can still serve it with maple syrup, which is naturally fat-free.

2. Dip bread slices, one at a time, in egg mixture, pressing bread lightly to coat both sides well. Place 3 or 4 slices in skillet, and cook 6 to 8 minutes or until lightly browned on both sides.

3. Transfer French toast to cookie sheet; keep warm in oven. Repeat with remaining margarine, bread slices and egg mixture. Serve French toast with maple syrup and berries or other fruit, if you like. Makes 4 servings.

1. In pie plate, with fork, beat eggs and milk. Spread peanut butter on the eight slices of bread. Top 4 slices of bread with banana slices. Top with remaining pieces of bread, to make 4 sandwiches. Dip in egg mixture to coat.

2. In 12-inch nonstick skillet, melt butter on medium. Add sandwiches and cook for 6 minutes, or until golden on both sides. Drizzle with maple syrup. Makes 4 servings. 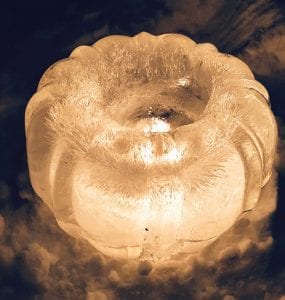 Ice is nice! Especially when you create a warm welcome to your home with a creative, icy greeting on a dark winter’s night. From popular snowball-size ice candles to large blocks, they all sparkle and glow to line a pathway to your front door.

Easy for me to say, I know, since I live in snow-covered Minnesota, where it’s usually below freezing all winter long. But I proved that I could light the night and create an ice luminary in a moderate climate when I invited friends to our California cabin recently. Two days before the party, I rooted through cupboards in search of a Bundt pan. I then filled the mold with water and let it freeze in our freezer.

Before friends arrived the next evening, I popped the beautifully shaped “ice lantern” out of the mold, set it on a rimmed tray (to catch melting ice) and placed it on the front porch step with a lighted votive in the inside cavity. Once guests arrived, oohing and ahhing with “How did you make that?” queries, I brought it inside for a magical buffet centerpiece. Although it was partially melted by evening’s end, another luminary was prepping in the freezer for another night.

If you have a Bundt pan hiding in your cupboards, bring it out and make ice lanterns with your kids. The price is right with this enjoyable craft — your only cost is water and candles! Here’s how:

Here’s the stuff you need:

1. Fill the pan with water to within an inch of the rim. Wedge in floral objects between the sides of the pan, if you wish. Small objects, such as plastic fish, add whimsy. Or, add a drop of food coloring.

2. Place pan in the freezer or outside if it is below freezing.

3. When frozen, turn upsidedown in a sink. Let it thaw a bit, and slowly lift pan. Or, run water over pan to release.

4. Set a candle inside. At sunset, an adult can light the candle.

Note: An adult should always be present when burning candles.

“Happy Brrrrr-thday” idea: If you live in snow country, make two Bundt pan ice lanterns to create an ice cake. Go outside and stack them on top of one another, with snow spread like icing inbetween layers. Top with pretend candles nestled in snow. “A slice of ice, anyone?”