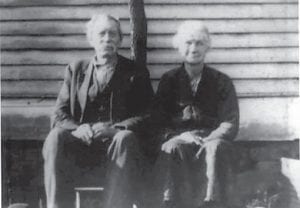 James Tairl Smith was better known as “J.T.” or “Jeems,” the commonly used nickname for James during those days.

According to J.T. Smith’s greatgranddaughter Bonita Pridemore Adams and her sister Delana Pridemore Banks, young J.T. Smith lived near Eolia. On his journey across Pine Mountain to court Margarette Fields, daughter of Davis and Nancy Fields on Elk Creek near Blackey, he passed a large, T-shaped, white house with lots of farmland about a half mile downstream from the current Jeremiah post office. J.T. declared that one day he would own that house and farm. He married Margarette, and true to his word, he bought the farm and he and Margarette raised their family in that big white house. Today that house is locally known as the Virgie Stacy House, so named because J.T.’s daughter Virgie Smith Adams Stacy lived there for many years.

When they became big enough, the chore of keeping the big white house warm during winters fell to J.T.’s sons Dee and Franklin. Dee Smith related that he and Franklin had four fires to keep burning: a fireplace on each end of the main house, a cooking stove in the kitchen wing, and a fire in J.T.’s store located where Don Pridemore now lives. Dee also said that in order to keep the fires burning, it took both of them two days every week to drag in trees with horses and cut the trees into firewood.

People now drive across the bridge at Dixon Memorial Church to the Sycamore Loop area. Before that bridge was built, the road to that area left KY 7 at Virgie Stacy’s house. It ran downhill between her house and where Don Pridemore now lives, curved to the right behind the Pridemore house, and forded Rockhouse Creek. The road then curved uphill to the left and crossed the railroad near the Sycamore school. Later the county built a ‘low water bridge’ consisting of culverts covered with concrete where the road forded the creek. The culverts often became jammed with debris causing the river to overflow the bridge. Civic-minded residents tried to keep the culverts unclogged. Higher floods also overflowed it.

Remnants of a log dam remained until the mid-1900’s near the site of the low water bridge or maybe slightly upstream from it toward the swinging bridge. This dam, built to provide water power for a mill that had once operated there, created a good fishing hole. Margarette Smith was an avid fisherwoman who caught many a meal for her large family by fishing off the mill dam. The backed-up water was called the Mill Pond and the name continued in use after the dam was gone. There were likely dozens of “Mill Ponds” in Letcher County. The old mill also gave its name to Millhouse Hollow that flowed by it into Rockhouse Creek.

When the Mill Pond froze over, the J.T. Smith family cut the ice, stored it in a building, and covered the ice with sawdust to slow the melting. The Smith family had ice through the spring and into the early summer.

In the mid- to late-1930’s, a small plane developed engine trouble; with its engine sputtering, it flew upstream between the mountains along Rockhouse Creek and made an emergency but safe landing in the Big Field behind the Jeremiah Post Office. Since few people at that time had seen a plane up close, people came from miles around to see, walk around, and touch the plane. J.T. Smith, who owned the land, had a corn crop planted in the Big Field. The landing of the plane damaged his crop, but far greater damage was done by the tourists who came to see the plane. This continuing damage to his crop of corn, which he needed to feed his livestock through the upcoming winter, concerned J.T. Smith considerably, and to stop further damage to his corn crop, he sternly expressed his concerns to would-be tourists. He was happy to see the plane repaired and flown away.

There seems to be some uncertainty as to how J.T. Smith spelled his middle name. According to the genealogical information collected by his grandson Jake Smith, the name “Terrel” occurred in his ancestry. J.T.’s greatgrandmother was Lucy Terrel who married John Cox and their son — J.T.’s grandfather — was named Terrel Cox. Another great-grandmother of J.T. was Anna Terrel.

This writing is based on a conversation with Kenneth Blair, a retired educator now living in Lexington. Tony Blair is a retired school teacher living at Jeremiah.