The Letcher County Band has grown to 350 students 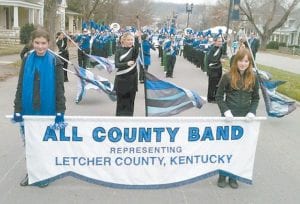 The Letcher County Central High School Band had a great first semester. Six years ago, what started out as just a band with a few members has grown to a countywide band program with more than 350 students.

Instrumental music is not only taught in the high school, it is taught in the elementary schools as well. There are five concert performing bands: The Beginning Band, The Central Band, The West Band, The East Band, and the Letcher County Central High School Band.

The Christmas concert “A Christmas Spectacular” was performed on December 11 at the LCCHS auditorium. There were approximately 500 in attendance and each band’s performance was exquisite. The concert evening ended with the high school band’s rendition of “Sleep in Heavenly Peace,” which drew a standing ovation from the crowd.

The LCCHS Marching Band, along with members of the Jenkins High School Band, formed the All County Band representing Letcher County. These students traveled to Frankfort and participated in the Governor’s Inaugural Parade on December 13. The LCCHS Marching Band will be performing at Walt Disney World in April and appreciates the community, school, and business partnerships that have helped and will make this a reality.