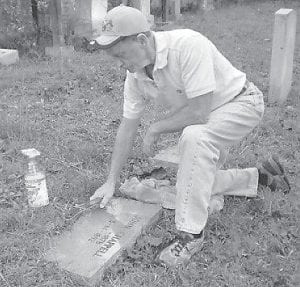 This 2008 file photo shows Jenkins resident Ked Sanders cleaning the grave marker of John Chappell, one of five victims of an 1892 massacre at Pound Gap. The graves of all five victims are located in Letcher County.

EDITOR’S NOTE: The following column entitled “Picked Up in Passing: The Lost Money Bags” was published in the June 24, 1954 edition of The Mountain Eagle and concerns a tale that originated in the years after a May 14, 1892 mass murder near the Ken in tucky-Virginia border that has come to be known as “The Pound Gap Massacre” or “The Killing Rock Massacre.”

Moonshiner Ira Mullins and six others, most of them family members including daughter-in-law Jane Mullins, of what is now the Camden section of Jenkins, were traveling to Pound, Va., from Kentucky when they were ambushed by former U.S. Marshal Dr. Marshall Benton “Doc” Taylor and two brothers, Calvin and Samuel Henan Fleming. Five of the seven members of the Mullins party, including an immobile Ira, were killed. Ira’s 14-yearold son John Harrison Mullins and Jane Mullins survived the shootings at Killing Rock on the Virginia side of Pound Gap. 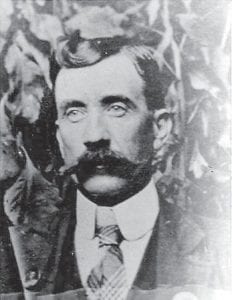 This photo was taken when The Red Fox practiced medicine.

Scott County, Va.-native Doc Taylor, a 58-year-old former Letcher County resident known also as The Red Fox, and Ira Mullins became sworn enemies after Mullins was left paralyzed after a shoot-out in Wise, Va., which occurred as Taylor was confiscating a load of moonshine being hauled by Mullins. Taylor lost his U.S. Marshall’s job as a result of that first incident.

Taylor, who many believed had gone insane, was arrested after a railroad detective found him hiding in a railroad car in Bluefield, W.Va. After being convicted of the five murders, Taylor was hanged in front of the Wise County Courthouse on October 27, 1893. However, some believed that Taylor didn’t really die as a result of the hanging and that his friends were able to sneak him away from the courthouse.

Calvin Fleming, who fled after the killings, was shot and killed by bounty hunters in Boggs, W.Va., on January 23, 1894. The bounty hunters wounded Samuel Henan Fleming.

With the prosecution now hampered by the death of eyewitness Jane Mullins Fleming, Henan Fleming, who had earlier confessed to his role in the massacre, stood trial on July 24, 1894, but was acquitted. He returned to West Virginia, where he worked as a lawenforcement officer for several years.

A fourth man, Henry Adams of Whitesburg, was tied to the Mullins family murders, but never stood trial. Adams apparently owned a rifle used the massacre, but the case against him was dismissed in 1901 because of insufficient evidence.

Jeff Mullins used to stand on the streets of Wise, Va., and tell tales for hours at a time. He just loved to tell younger folks about the things he remembered from long ago.

Jeff ’s specialty was tragedies, and he particularly liked to talk about the murder of the Ira Mullins family on Pine Mountain, near Pound Gap, by Dr. Marshall B. “Doc” Taylor and two young fellows named Fleming (Calvin and Henan). Taylor was hanged at Wise for his part in the crime.

One day, Jeff Mullins was holding forth when somebody mentioned the Mullins murder. In a moment Jeff was off on the story of the “lost money bags.”

“You know,” he said, “Ira Mullins was a man of a heap of money. Guess he made it by running whiskey in here from North Carolina. Anyway, I’ve been told that when Doc Taylor and the Fleming boys killed him and his family that he had two big money bags full of gold and silver. And from what I can find out, Taylor never got a cent of it, after planning for weeks and going to all the trouble and risk that he did to kill lra Mullins.

“ They say that Doc Taylor was afraid to venture down to the wagon after they had killed Mullins, his wife, and the others. Said that he sent the Flemings and they came back and said they couldn’t find a penny.

“From what they say, Doc Taylor put in all the time from the day of the killing till he was shinned out in a dry-goods box, and later arrested slipping around there on Pine Mountain, looking for the money bags that Ira Mullins was known to have been carrying with him in the wagon as he moved over from Elkhorn to the Pound. It must have been a great disappointment to Taylor not to get the money that he put himself to so much trouble for.”

Jeff lowered his voice to just above a whisper:

“And, there’s something else,” he said, that has never been explained. “Who were the two men that were seen for years and years after Doc Taylor was hanged, slipping around Killing Rock in the dead of night, parting the bushes and stirring the leaves ‘plimeblank’ like they was looking for something that had been lost? I don’t know. I’m not saying, one way or the other, but a lot of folks will tell you that they were Doc Taylor and Ira Mullins, come back from the dead, trying to find the lost money bags.”