The love of art brought them together 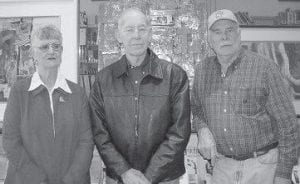 ART EXHIBIT — Doug Adams (at right) is pictured with brother-inlaw Nathan Baker and Doris Adams. Doris Adams and Nathan Baker are member of the Letcher County Tourism Commission, which is sponsoring an art exhibit in which Doug Adams is participating.

I caught up with Doug and June Savage-Adams and their grandson, Chandler, on the opening day of the citywide art exhibit, Dec. 12, at the Harry M. Caudill Memorial Library in Whitesburg. A steady stream of old friends, relatives, former students and well-wishers were coming by to enjoy the opening day. We became instant friends and they enlisted me to help hang some of their paintings. They were kind enough to share some of their personal life with me.

Many successful people when reflecting on their careers will recall a special person or persons and/or event that influenced them. Sometimes that influence was during their formative childhood years and sometimes later in life. So it was with June Savage- Adams, wife of acclaimed artist Doug Adams of Letcher County. She recalls living in Wyandotte, Mich., during her youth.

“The school system I attended nurtured the whole child. I learned and developed a love of song and singing there that has continued to dominate a part of my creative time today,” said June. “The first visual art influence that stands out most in my mind came from a Sunday school teacher in Ohio. We were visiting my mother’s sister in Ohio and had attended Sunday school with my cousins. We were given an assignment to create a small sculpture of a Biblical figure as a part of our Sunday school lesson. I always thought it was of Jesus but I am not sure now after all this time; it may have been Joseph. It was made of clay and paper cutouts. The teacher made a big fuss over my little sculpture and exclaimed to the other children how nice it was . . . that I had done a real nice little figure. That experience remains as one of the most significant influences and highlights in my childhood years where my art is concerned. It had such an impact on me that even now when I recall it, I have to smile. It still makes me feel good. 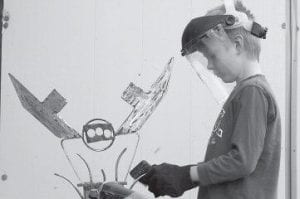 YOUNG ARTIST — Eight-year-old Chandler Brice Hamilton enjoys making metal sculptures and pottery. He is the son of Jessi Dawnyal Hamilton and grandson of Doug Adams and June Savage-Adams of Morehead.

“I can’t remember a time when art and writing songs and poems wasn’t a part of me and my life. I may have inherited some of my talent from my dad who was gifted in visual arts. He used to tell me that when he was in the military he entertained his buddies and helped relieve some of the stress by drawing pretty women on their duffel bags.”

June said that for her, art was a calling that became a profession and teaching became a part of that calling. “You never know how you may impact a person’s life with what you may say or do. In art you have an opportunity to make a difference in someone’s life simply by providing a vehicle of expression for them. To create something that someone else finds pleasure or beauty in is a satisfying avocation.

“I think that phenomenon reaches across the board in all the arts whether it is in music, writing, dance, song or visual arts,” continued June. She said she finds that all of her experiences and education serve to broaden and support her artistic vision and that growing and learning is a never-ending journey. She said she would like to pass that love of life and learning on to her children. She has two grown daughters by a previous marriage.

Reflecting on her life with her husband, Doug Adams, June recalled that they met for the first time at an art exhibit in the mid- 1980s. “Tom J. Whitaker, who was my art professor at the time, invited an art class I was taking at Prestonsburg Community College to attend the exhibit. The Kentucky Heritage artist group was exhibiting there. People like Tom J. Whitaker, Russell May, Sam McKinney, and Doug Adams were part of the group exhibiting at the Holiday Inn. It was an impressionable experience for me; it was the first professional art exposure I had in a group exhibition. I was impressed with the diverse talents of those Eastern Kentucky artists. That is when I first met Doug Adams. His hair was turning white and he had a white mustache. I thought he looked very distinguished and a bit mysterious. I asked Tom Whitaker who he was. He replied, ‘That’s Doug Adams.’

“The way Tom spoke his name I knew he thought a lot of him and that he was an important artist of the time. I never dreamed that Doug and I would ever meet again but we did. We met several times afterward at various art shows and social events. About five years later I received a phone call from Doug. He said that he was getting a divorce and he invited me out to dinner. That was the summer of 1992 and we have been together ever since.”

Doug has a daughter by a previous marriage and June has two daughters. They have three grandchildren. One grandchild, Chandler Brice Hamilton, is also a budding artist. He is especially adept at sculpting and making pottery. This eight-year old is a second grader at Rodburn Elementary School in Morehead. His school principal let him out of school as an educational enhancement day so he could participate in the exhibit.

Doug Adams, a native of Letcher County, was born and raised at Isom. He attended Caney Junior College, Morehead State University and received master’s degrees from both Morehead and Eastern Kentucky University. He grew up in a close knit family with his sister, Lois Baker, founder of Mountain Comprehensive Health Care, and the late James A. Adams, superintendent of schools in Fort Myers, Fla.

Some of Doug’s most cherished memories are of the life and times he shared with his family and close friends while growing up in the mountains. Many of Doug’s watercolor paintings center on memories of family and scenes taken from the dark hollows, mountains, streams and peaceful fields of this beautiful, rugged mountain country.

Although there were no art programs in the school he attended as a young child, Doug says art came easy for him and it seems he was always interested in art and drawing even as a very young child. His first experiences in drawing were of fighter planes from World War I and World War II. One significant influence on Doug came from his father who he describes as “dabbling in art a little.”

Doug developed an appreciation for nature at an early age and describes nature as being one of his greatest teachers. Nature was easy to draw for Doug because, as he says, “It was always there in front of you to see.”

Another influence that may have helped direct Doug’s artistic path came about when he won a cartoon contest while attending Stuart Robinson High School. The cartoon depicted two adult buzzards and a young buzzard sitting on a tree limb. The young buzzard had its head hung down looking very dejected and the adult buzzards were talking about him. One of the buzzards was asking what was wrong with the young buzzard. The caption said, “I caught him eating fresh meat.”

Although his watercolor paintings have gained him wide acclaim, it is his drawings, abstract sculptures and abstract collages which really accentuate the versatility and total effectiveness of his talents. Doug is a visionary with a never-ending reservoir of fresh ideas and subject matter. His commitment to the arts and art education has been dominant throughout his career.

The Adamses’s art exhibit at the Harry Caudill Library in Whitesburg was initially scheduled for one week beginning Dec. 12. Lina Tidal, director of Letcher County Libraries, announced that the exhibit will be extended to Jan. 15.