The Mars Volta show softer side 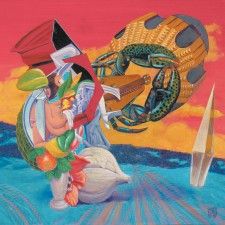 The cover of the latest album by The Mars Volta, “Octahedron,” is shown. (AP Photo/Warner Bros.)

A creative partnership between guitarist Omar Rodriguez-Lopez and vocalist Cedric Bixler-Zavala — who breathe life into their collaborations with the help of various musicians — The Mars Volta soar just as high with acoustic guitars and piano arrangements as they do with blazing riffs and space-rock atmosphere.

The prolific Rodriguez-Lopez effortlessly weaves elements of punk, funk, psychedelia, jazz fusion, and Latin grooves into the mix, while Bixler-Zavala teams a scorching falsetto with an impressive vocabulary on his abstract, metaphorical vocals.

They kick off with a light touch on “Since We’ve Been Wrong” and bring some serious spaced-out funk-rock on “Teflon” and the dynamic “Halo Of Nembutals.” ”With Twilight As My Guide” sounds just like its title with gloomy acoustics and haunting guitar effects, and “Desperate Graves” is a dose of post-hardcore aggression.

The disc closes with the manic 1-2 punch of “Copernicus,” which floats into deep electronics, and the cryptic “Luciforms,” with a trippy opening that builds into wah-wah euphoria.

And euphoric is exactly what “Octahedron” is — yet another indispensable entry in The Mars Volta’s already impressive catalogue.

CHECK THIS TRACK OUT: “Cotopaxi” kicks hard from start to finish and features a ferocious performance by drummer Thomas Pridgen.