The naming of Little Shepherd Trail 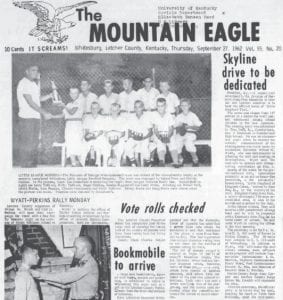 The September 27, 1962 edition of The Mountain Eagle carried the news that a scenic trail developed by the Kentucky Division of Forestry along Pine Mountain in Harlan and Letcher counties has been officially named “Little Shepherd Trail.”

The name was chosen from 137 entries in a name-the-trail contest conducted among school children in the two counties. The winning entry was submitted by Troy Duff Jr. Now a freshman at Cumberland High School, Duff was still in elementary school when he entered the contest. He will receive a U.S. Savings Bond for his effort.

Announcement of the winning name was made by Governor Wilson W. Wyatt, who was instrumental in planning the trail and starting its development.

The trail, built primarily to help fight forest fires, will be opened with ribbon-cutting ceremonies on October 1, Wyatt said.

Duff cited the novel “Little Shepherd of Kingdom Come” as his source for naming the road. The nationallyknown novel was written by John Fox Jr. in the vicinity of what is now the 745-acre Kingdom Come State Park.