The new or old Bristol?

When the checkered flag waved back in March ending the Food City 500 at Bristol Motor Speedway, Bruton Smith the chief executive officer of Speedway Motorsports Inc. that owns the track, quickly announced that changes could be on the way. The race that day lacked any real excitement and from the number of empty seats, it really didn’t come as a surprise.

What was once the hardest ticket in all of motor sports to come by was in the process of just becoming another race on the schedule and many believe it was because of the new surface that was put down in 2007. The old concrete surface was worn out by then and in need of being replaced. The track was repaved once again in concrete, but the high-banked turns were replaced with variable banking.

The result was a very smooth racing surface but the new banking actually opened up a third groove of racing. This extra groove gave drivers more room and in the process took out the majority of the banging and rubbing that used to take place. Racing at Bristol was no longer the slugfest that it used to be and its races were no longer guaranteed sale outs. 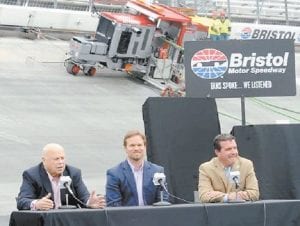 Immediately after the spring Food City 500, Smith asked the fans what they wanted to see at Bristol. The fans wanted to see a return to the old style of racing before the new track was put down. Always a man of action, Smith quickly followed up to the desire of the fans and immediately began reconfiguring the track.

The track’s third groove’s banking was reduced to equal that of the second groove, thus eliminating the higher lane as an option for drivers. Anytime you take away some of the racing surface, the racing automatically becomes tighter.

The promise of the “old” Bristol style of racing has helped in selling tickets for Saturday night’s race, but there is still one factor that Smith and his track can’t control as far as creating exciting racing. It wasn’t any coincidence that the excitement level at Bristol started to fade as the Chase was introduced to the series.

Bristol comes at a time on the schedule when there are only three races remaining before the Chase field of 12 drivers is set to run for the title. Let’s face it, the top-10 drivers in points going into Bristol would love to win the race, but they also know with just three races left a good night in the points is just as important. That is how you win a championship so there is no blame being put on the drivers for the woes of Bristol, but it has been a contributing factor.

Of course, you still have a handful of drivers trying to earn their way into the Chase by collecting checkered flags. These are the drivers that have little to lose if they don’t park it in victory lane and could be the ones to provide the fans with the old style Bristol racing that most people would like to see. Drivers racing for a needed victory with less track to do it on could return Bristol to the Bristol of old.

PIT NOTES: Fans of night racing should love this week’s schedule at Bristol as a green flag will be waved on three different nights to begin a NASCAR event. The racing gets underway on Wednesday night with the Camping World Truck Series UNOH 200. Thursday, has no race but it does feature a great free event for the entire family as it is the annual Ford Transporter parade that takes place from downtown Bristol to the track. Friday, the lights at the track are back on for the Food City 250 Nationwide Series and then Saturday it’s the Irwin Tools Night Race.

Bristol will also pay tribute to the all-time winningest college basketball coach, Pat Summit. Knoxville native Trevor Bayne will be piloting his University of Tennessee Ford in the Food City 250 to raise awareness for the Pat Summit Foundation. Summit was diagnosed with early onset Alzheimer’s disease and her foundation is used to support the fight of the disease. The speedway for the Friday night race is offering special “We Back Pat” ticket packages.