A look at iconic announcers in pro football’s history 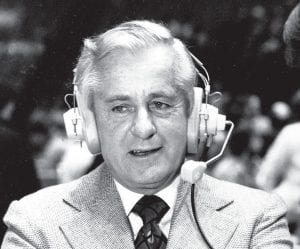 In this Sept. 15, 1978, file photo, Curt Gowdy, the dean of network sportscasters, wears a headset. A versatile announcer nicknamed the Cowboy who started off as Mel Allen’s partner on Yankees radio broadcasts, Gowdy was one of the original voices of the AFL on ABC when the league started in 1960. He moved on to NBC in 1965 and was in the booth for some of the most memorable games in pro football history. (AP Photo)

While fans of some sports all have their favorite local announcers, the NFL, which is celebrating its 100th year, has been much more of a shared viewing experience.

With all games being shown on national networks rather than solely on local channels, the most memorable voices of football are universal.

There were the early voices of the game such as Curt Gowdy and Ray Scott; the unique combination of Howard Cosell, Don Meredith and Frank Gifford in prime time; to years of Pat Summerall’s brevity punctuated by John Madden’s boisterous interjections.

Everyone has a style they prefer, from Tony Romo’s role as Nostradamus to the exuberance of Gus Johnson and Kevin Harlan to the understated style of men such as Summerall and Scott.

Here’s a look at some of the iconic voices of the NFL: 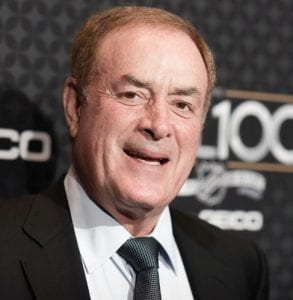 NBC “Sunday Night Football” announcer Al Michaels arrives at the The NFL100 Gala held at the Microsoft Theater in Los Angeles. Michaels has been a prime-time fixture in the NFL for decades as the voice of “Monday Night Football” on ABC for 20 years and is now entering his 14th season calling Sunday night games on NBC. (Invision/AP)

PAT SUMMERALL: Summerall transitioned from a successful playing career to the booth in the 1960s and became the voice of the NFL. He started off as an analyst and was part of the first Super Bowl broadcast. He shifted to a play-by-play role in 1974 at CBS and that’s where he really shined. With an economy of words and understated persona, he helped analysts Madden and Tom Brookshier shine. A call of a big TD for Summerall could be as simple as “Montana … Rice … Touchdown.” He announced a record 16 Super Bowls on network television and contributed to 10 on the radio as well.

AL MICHAELS: Michaels has been a prime-time fixture in the NFL for decades as the voice of “Monday Night Football” on ABC for 20 years and is now entering his 14th season calling Sunday night games on NBC. Michaels was viewed as so important to the premier prime-time package that NBC traded the rights to Oswald the Lucky Rabbit, Walt Disney’s precursor to Mickey Mouse, to Disney in order to get the rights for Michaels to call Sunday night games in 2006. Michaels has called 10 Super Bowls and is a play-by-play announcer willing to interject his opinions into the broadcast when needed, as well as frequent thinly veiled gambling references to point spreads and over/unders. 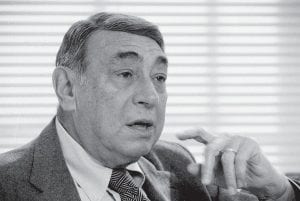 In this Feb. 14, 1985, file photo, Howard Cosell speaks in his ABC-TV office in New York. One of a kind as an announcer, Cosell was the rare analyst who never played or coached the game. (AP Photo)

DICK ENBERG: Enberg replaced Curt Gowdy as the lead announcer for NBC’s coverage of the NFL in 1979 and spent more than three decades calling NFL games there and at CBS. Known for his exclamation “Oh my!” that was peppered throughout his broadcasts, Enberg called eight Super Bowls at NBC and was the pregame host for another. He worked with various analysts such as Merlin Olsen, Bob Trumpy, Phil Simms and Paul Maguire. Enberg called some of the most memorable games, from John Elway’s “Drive” to the AFC championship in January 1987 to Joe Montana’s comeback win over Cincinnati in the Super Bowl two years later to back-to-back titles by the Cowboys in the early 1990s.

CURT GOWDY: A versatile announcer nicknamed the Cowboy who started off as Mel Allen’s partner on Yankees radio broadcasts, Gowdy was one of the original voices of the AFL on ABC when the league started in 1960. He moved on to NBC in 1965 and was in the booth for some of the most memorable games in pro football history. He called the first Super Bowl for NBC; the “Heidi” game in 1968; Joe Namath’s guarantee in Super Bowl 3; and the Immaculate Reception. ABC wanted to hire Gowdy as the original voice of “Monday Night Football,” but NBC wouldn’t let him out of his contract. His final Super Bowl broadcast came when Pittsburgh beat Dallas for the title following the 1978 season before he was traded to CBS to create an opening for Enberg to become the lead voice of the NFL on NBC. Gowdy had few catch phrases but was known for colorful descriptions.

RAY SCOTT: Scott began calling Packers games in the 1950s and was the voice of the Lombardi dynasty of the 1960s, when CBS had crews dedicated to specific teams until 1968. With his understated style that featured calls like, “Starr … Dowler … Touchdown, Green Bay,” Scott was on the microphone for some of the NFL’s biggest games, including the Ice Bowl in 1967 and the first two Super Bowls. Scott called four Super Bowls and seven NFC or NFL title games.

JACK BUCK: Best known for his work in baseball calling St. Louis Cardinals games, Buck also had a big impact in football. He called the 1962 AFL title game that went double overtime and was one of the top announcers at CBS for more than a decade, calling the Ice Bowl, and the 1970 Super Bowl. He also was a staple on radio, calling 17 Super Bowls for CBS radio as well as “Monday Night Football” games for many years. Buck’s son, Joe, also went on to have a successful announcing career and has called six Super Bowls as the lead play-by-play man at Fox.

JOHN MADDEN: After a decade run as a successful coach of the Raiders, Madden made his biggest impact on the game after moving to the broadcast booth at CBS in 1979. He became the network’s lead analyst two years later and provided the soundtrack for NFL games for most of the next three decades, entertaining millions with his interjections of “Boom!” and “Doink!” throughout games, while educating them with his use of the telestrator and ability to describe what was happening in the trenches. He helped establish Fox when the network took over the NFC package from CBS in 1994, and broadcast Monday night games on ABC and Sunday night games on NBC before retiring in 2009. He won an unprecedented 16 Emmy Awards for outstanding sports analyst/personality, and covered 11 Super Bowls for four networks.

HOWARD COSELL: One of a kind as an announcer, Cosell was the rare analyst who never played or coached the game. He brought a different perspective to the TV and his willingness to clash with fellow analyst Don Meredith helped make “Monday Night Football” popular to die-hard and casual fans alike. He popularized the phrase “He could go all the way!” on long plays that became TDs, and was never shy about criticizing players, coaches, the league or his fellow announcers. Cosell’s most memorable moment might have come in 1980, when he informed viewers that John Lennon had been killed. Cosell also put together the halftime highlights package that provided many fans their first look at Sunday’s games in the era before Red Zone and ESPN’s “NFL Primetime.”

MERLIN OLSEN: The Hall of Fame defensive tackle went on to have a long career as the top analyst at NBC, working alongside greats Gowdy and Enberg during the 1970s and ‘80s and calling five Super Bowls. A physical presence on the Rams’ “Fearsome Foursome” defensive line, Olsen was more soft spoken as an announcer. He never tried to overshadow the game and was a comfortable listen throughout his career.

FRANK GIFFORD: The Hall of Fame running back went on to have a career as one of the most versatile announcers in football history. Gifford started broadcasting following his first retirement when he was knocked out on a hit by Chuck Bednarik. He retired for good following the 1964 season and returned to CBS as a broadcaster, where he was an analyst for the Ice Bowl and the first Super Bowl, and a sideline reporter on two more Super Bowls. He then moved to ABC in 1971 where he shifted to a play-by-play role on “Monday Night Football,” often playing the straight man to Cosell and Meredith. Gifford then moved back to the analyst chair in 1986 when Michaels took over and remained in that role for more than a decade. Gifford and Summerall are the only announcers to call a Super Bowl as both play-by-play man and analyst.

CRIS COLLINSWORTH: The former receiver moved right to TV after ending his career following the 1988 season, working in the studio on HBO’s “Inside the NFL.” He did both studio work and worked as a game analyst throughout his career, but has had his biggest impact on NBC’s coverage on Sunday nights. Never shy to offer strong opinions, always well-prepared and adept at quickly analyzing plays, Collinsworth has been a perfect replacement for Madden at NBC. He also has played a role in getting statistical analysis into the mainstream by buying Pro Football Focus and using some of their numbers on his broadcasts.

AL DeROGATIS: The former defensive tackle for the New York Giants became perhaps the most respected analyst of the early Super Bowl era. Working for years alongside Gowdy on NBC’s top team, DeRogatis was known for his ability to describe what happened even before a replay and helped millions of fans better understand the game. He worked three Super Bowls, including Joe Namath’s guarantee game in January 1969.