The night we learned ‘who done it’ 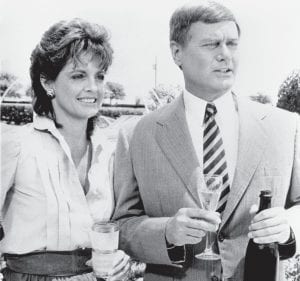 On Friday night, November 21, 1980, television sets in 76 percent of all U.S. households (estimated at between 83 and 90 million) were tuned to the CBS network to find the answer of the “Dallas” series cliffhanger, “Who Shot J.R.?” J.R. Ewing (above right), known as “the man America loved to hate,” was a character in “Dallas” played by actor Larry Hagman. The question of who shot him had been on the minds of many since the amazingly-popular primetime drama’s third season ended on March 21, 1979. J.R.’s estranged wife Sue Ellen (left), played by actress Linda Gray, was the prime suspect, but in the end it was Sue Ellen’s sister and J.R.’s lover, Kristen Shepherd, who pulled the trigger. J.R. recovered from his wound and “Dallas” continued its successful run until May 3, 1991. (AP Photo)