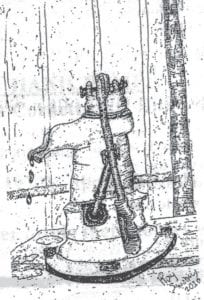 This illustration of a hand pump was drawn by Roy Swiney of Jeremiah.

Up through the 1970s about the only people in the county who had water inside their houses were the ones within the city limits. Everyone else had either a dug or drilled well or a hand-operated water pump. Some pumps were on the back porch; others were inside the house, usually in the kitchen.

Drawing drinking was from Bill Collins’s house in Blackey and carrying it up the hill to our house was one of my least-liked chores.

The bucket and dipper soon turned yellow with the sulfur deposits in his drilled well. I believe that’s what rotted all of our teeth out.

Next door to C. B. Caudill’s Store lived my great-aunt and uncle, R.B. and Sarah Cornett Caudill. They had a hand pump in their kitchen sink. I always thought, “That would be a nifty way to get water.”

Some pumps had to be ‘primed’ by pouring water into the spout before pumping. Woe be unto the one who forgot to save some water for priming the pump.

When we were looking at the land to build our house, I heard my greatuncle Hiram Whitaker tell my dad, “There’s a good drilled well somewhere on the property.”

We never did find it.

We carried water from Bill Collins’s house and from a spring up on the hill above the house. About six buckets full a day was sufficient.

When all four of us boys left home, Dad said, “I’m not carrying water!” He blocked in the spring and dug a ditch from it to the house, and now he had running water.

Before that, our baths were taken in a long washtub behind the stove, with water heated on the stove. After we left, Dad put in a bathroom.

A hand pump would have helped us in our house. Other houses couldn’t do without one.