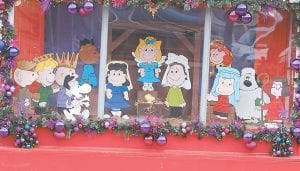 THE PEANUTS GANG’S ALL HERE — Pictured is a portion of the nativity scene from “A Charlie Brown’s Christmas,” which has been recreated in a window display at the dental office of Dr. David Narramore on Main Street in Whitesburg. The elaborate display should be seen after dark to be fully appreciated.

As the holiday season approaches, children — and adults too — expect to see extravagant window displays in front of the dental office of Dr. David Narramore in downtown Whitesburg.

“After Santa’s workshop, people kind of expect it,” said Narramore. “Kids got to have something to look at. If kids like it, then we have hit our mark.”

About a dozen years ago, Narramore, his wife, Lisa, and daughter Alex made a large nativity scene that was spread out on the sidewalk in front of the dental office on 353 Main Street.

Nearly 10 years ago, Dr. Narramore decided to build a large display window in front of his office to enclose his creations. He and his family made papier-mâché figures of the elves from “Rudolph the Red- Nosed Reindeer.” Lisa Narramore sewed clothes for the elves. The Narramores replicated Santa’s workshop scene of the holiday classic, complete with Hermey who wanted to be a dentist instead of an elf. The full-scale model was extremely detailed with tiny framed prints and many toys.

Last year, the Grinch took center stage at the east part of Main Street. Cindy Lou-Who and other Dr. Seuss characters were made of papiermâché.

This December, the Peanuts gang can be seen practicing for a Christmas play. Charlie Brown, who is located to the far right in his own display box, is directing the nativity scene. Snoopy’s colorful doghouse is located above the cast. And of course, Charlie Brown’s famous twig of a tree has not been left out.

Dr. Narramore said it is best to see the display at night when the Christmas lights shine bright.

“We’ve had several people who have already had their picture taken in front of it,” said Dr. Narramore, chairperson of the Letcher County Tourism Commission. “From a tourism standpoint it is a way to get people downtown.”

“We have had a lot of people ask us to do a Peanuts theme,” said Dr. Narramore.

Dr. Narramore drew templates on large sheets of wood and carpenters cut out the pieces. He painted 13 characters in the lobby of his office during Thanksgiving break. Each Peanut took five to six hours to paint.

The majority of the supplies used to make the Christmas display were purchased in Letcher County, Dr. Narramore said.