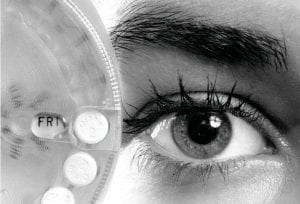 In this August 1974 file photo, a woman holds a birth control pill dispenser in New York. America’s favorite birth control method turned 50 on May 9. The pill is now widely acknowledged as one of the most important inventions of the last century. (AP Photo)

A world without “the pill” is unimaginable to many young women who now use it to treat acne, skip periods, improve mood and, of course, prevent pregnancy. They might be surprised to learn that U.S. officials announcing approval of the world’s first oral contraceptive were uncomfortable.

“… Our own ideas of morality had nothing to do with the case,” said John Harvey of the Food and Drug Administration in 1960.

The pill was safe, in other words. Don’t blame us if you think it’s wicked.

May 9 marked the 50th anniversary of that provocative announcement that introduced to the world what is now widely acknowledged as one of the most important inventions of the last century.

The world has changed, but it’s debatable what part the birth control pill played. Some experts think it gets too much credit or blame for the sexual revolution. After all, sex outside of marriage wasn’t new in 1960.

The pill definitely changed sex though, giving women more control over their fertility than they’d ever had before and permanently putting doctors — who previously didn’t see contraceptives as part of their job — in the birth control picture.

But some things haven’t changed. Now as then, a male birth control pill is still on the drawing board.

“There’s a joke in this field that a male pill is always five to seven years away from the market, and that’s what people have been saying since 1960,” said Andrea Tone, a history professor at Montreal’s McGill University and author of “Devices and Desires: A History of Contraception in America.”

The pill is America’s favorite form of reversible birth control. (Sterilization is the leader overall.) Nearly a third of women who want to prevent unwanted pregnancies use it. “In 2008, Americans spent more than $3.5 billion on birth control pills,” Tone said, “and we’ve gone from the one pill to 40 diff erent brands.”

There are Yaz, Yasmin, Seasonale, Seasonique and Lybrel — all with slightly diff erent packaging, formulations and selling points. Lybrel is the first pill designed to eliminate menstrual periods entirely, although gynecologists say any generic can do the same thing if you skip the placebo and take the active pill every day.

In the 1960s, anthropologist Ashley Montagu thought the birth control pill was as important as the discovery of fire. Turns out it wasn’t the answer to overpopulation, war and poverty, as some of its early advocates had hoped. Nor did it universally save marriages.

“Married couples could have happier sex with more freedom and less fear. The divorce rate might go down and there would be no more unwanted pregnancies,” said Elaine Tyler May, 62, a University of Minnesota history professor who wrote “America and the Pill.

“None of those things happened, not the optimistic hopes or the pessimistic fears of sexual anarchy,” she said.

And it didn’t eliminate all unwanted pregnancies either. Nearly half of all pregnancies to U.S. women are unintended and nearly half of those end in abortion, according to the Guttmacher Institute, which has gathered data on abortions for years.

The pill is often associated with the women’s movement of the 1970s. But the two feminists behind the pill, the ones who provided the intellectual spark and the financial backing, were born a century earlier, in the 1870s.

Her grandson, Alex Sanger, 62, now chair of the International Planned Parenthood Council, remembers playing catch as a boy with his famous grandmother and eating her firehousespicy food.

“My grandmother had the idea for the pill back in 1912 when she was working on the lower East Side of New York,” Alex Sanger said. “She saw women resorting to back alley, illegal abortions. One too many of these women died in her arms and she said ‘Enough.’

Katharine McCormick, a philanthropist with a science degree from the Massachusetts Institute of Technology, bankrolled the work of Gregory Pincus, the man Sanger convinced to develop the pill. “It was my grandmother’s idea and Katharine McCormick’s money,” Alex Sanger said.

Ironically, when health hazards of the early pill arose — high levels of hormones caused blood clots in some women — young feminists protested that men had invented it and turned women into unwitting guinea pigs.

The FDA’s response to the hazards of the pill led to greater access to safety information for patients, another less-appreciated part of the pill’s legacy.

Today’s pill, with much lower doses of hormones, is much safer than the pill of 50 years ago. And it may even be good for you.

“The health benefits are tremendous,” said Dr. Melissa Gilliam, chief of family planning contraceptive research at the University of Chicago Medical Center. “It decreases the risk of ovarian cancer and uterine cancer. If we called it ‘the cancerpreventing pill,’ it would have far better traction. It’s a real success story.”

The pill divided mothers and daughters in its early days. Married women had clamored for it as soon as it went on the market — within two years of its approval, more than a million women were taking it. But that didn’t mean they wanted their unmarried daughters to have it.

“I talk to my daughter about the pill a lot more than I talked to my mother about the pill,” said Jean Elson, 61, a sociologist and expert on women’s health at the University of New Hampshire. Elson secretly started taking the pill in college in the late 1960s before she was married. Her mother wouldn’t have approved.

“The only conversations about sex I remember with my mother were ‘not to.’ I remember warnings about tongue kissing. She didn’t do that until she was engaged,” Elson said.

Many parents now discuss birth control with their unmarried daughters and sons. They also may discuss condoms to prevent disease, including AIDS. The greatest fear associated with unprotected sex for young people is no longer pregnancy, it’s serious sexually transmitted disease.

Another change is advertising. Women now in their 20s have seen ads for the pill nearly their entire lives. The first magazine ads for the pill ran in 1992. Now TV ads show smiling women liberated by the ability to limit or even eliminate their menstrual periods.

“The message is your period shouldn’t get in the way. It’s an appealing message,” said Sarah Forbes, 28, curator of the Museum of Sex in New York. Her generation takes the pill for many reasons and they take it for granted.

“We’re so used to it being so freely available,” Forbes said. “It’s almost impossible to think of a world where we didn’t have access to it.”

The pill is so ubiquitous that young women may have trouble learning about other options. Tone said one doctor said he didn’t remember how to fit a diaphragm, a flexible shield that covers the cervix. The pill is so highly marketed that other methods, like implants and IUDs, aren’t clearly understood by young women.

“We’ve got choices, but the information about them isn’t always well balanced,” said Judy Norsigian, 62, executive director of Our Bodies Ourselves, the nonprofit organization that publishes the long-standing women’s health guide of the same name.

Female doctors use IUDs twice as frequently as the general population of women and many recommend it to their patients.

“The future of birth control is not pills at all,” said Dr. Lisa Perriera, 34, of Case Western Reserve School of Medicine in Cleveland.

“The best birth control is easy to use, highly effective at preventing pregnancy and has few side effects,” Perriera said. “The methods that fit those criteria best are IUDs and implants. I think that’s where birth control is going.”

Others hold out hope for a breakthrough in malecentered birth control. An oral drug called miglustat worked in mice, but not in men. Researchers are recruiting men for studies of a hormonal gel to suppress sperm production.

“The question is will a single company decide to take this to market, to get FDA clearance, a very expensive undertaking, when it’s hard to predict how commercially viable a male pill would be,” Tone said. As much as women would like men to be equal partners in preventing pregnancy, “women at the same time feel a little bit nervous entrusting men to take a pill or be on a patch.”

After all these years, a male equivalent to the birth control pill is still five to seven years away.