The press will turn on Obama

A funny thing is about to happen to Barack Obama. No matter how much he thinks he’s ready for it, he isn’t. No matter how many people warn him, he’ll be surprised. And hurt. And angry.

His friends in the press are about to turn on him.

They may not even know it yet, but they will.

They can’t help themselves. They’ve been caught fawning, made fun of for favoritism, become the subject of their own scrutiny.

Which means they won’t be able to resist.

There’s an old parable about a scorpion that asks a frog to carry him across the lake. The frog is afraid of being stung. The scorpion assures him not to worry, that if he stings the frog, they’ll both drown. Of course, halfway across, that’s exactly what he does. “But why?” the frog asks, as both face death. The scorpion’s answer: I can’t help it. It’s my nature. 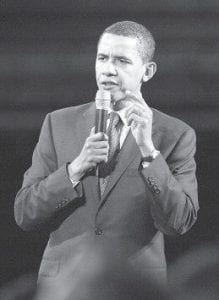 Mark my words. It’s about to begin.

This is not, as conservatives like to believe, an ideological thing. The press may be liberal, in the sense that most of them vote that way and are almost certainly voting for Obama. But they are simultaneously drawn to and repulsed by their own desire for attention, their own importance, their role as makers, cheerleaders and faithless friends.

The press had plenty of reason to feel burnt by the Clintons, having fallen for him once, big time, only to find themselves, in their book, manipulated and misled. That is not, I should add, how the Clintons saw it. They saw it as the press turning on them, which was also true. That is no doubt how Barack Obama will also see it, and he will, to a certain extent, be right.

And, most important of all, has he been getting a free ride?

It’s not that these questions shouldn’t be asked. They should. But they should be asked throughout the process, not, as is about to happen, in an avalanche, a storm of scrutiny, a blizzard of second-guessing from the very gushers who were, only a few short weeks ago, so busy guzzling Kool-Aid that they didn’t even look to see what it was made of.

The barrage may not have come in time to change the outcome of the Democratic contests earlier this week, or of the nomination fight. In this upside-down world, it would be fitting were the intense scrutiny that should mark the hardest fought primary contest in decades to begin only after it was effectively over. Stranger things have happened. I haven’t counted Hillary out yet. Too many have made that mistake already in this season to jump that gun.

But one thing I do know after nearly 30 years in politics: The press (and I guess that is my crowd now, though I will probably always feel more comfortable with a staff pin than a press dog tag) can be many things to a candidate. They can be pals, fans, drinking buddies, confidantes and cronies. But friends? True, loyal friends? Never.