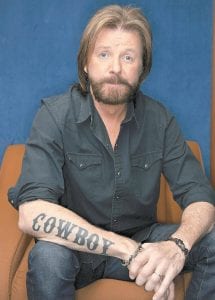 After a 20-year partnership with Kix Brooks in Brooks & Dunn, Ronnie Dunn is releasing his first self-titled solo album this week. (AP Photo)

Finally free of the bonds that came with being half of country music’s greatest duo, Ronnie Dunn says he went a little too far when he started working on his first solo album.

“It was chaos to me,” Dunn said. “I just hit the road running and panicked and went out and recorded. When it was all over I’d recorded somewhere close to 34 songs. Things were all over the map.”

Maybe freedom from his 20- year partnership with Kix Brooks in Brooks & Dunn wasn’t the good thing Dunn imagined it to be.

The duo’s output over the years was marked by conference-room compromises at almost every turn, serving as a system of checks and balances in one sense, and a set of chains in another.

Free to choose his own songs and collaborators, and working in a home studio as his own producer, Dunn might have kept looking for perfection forever.

His wife gently warned him against allowing impulsive decisions to take over his life. His label told him it was time to start choosing songs. His friends worried.

“ There were periods there where we all thought it was a bad thing because, you know, it can drive you crazy,” said Clarence Spalding, Dunn’s longtime manager and friend.

“In his eyes I think he thinks it’s the most important record of his new career. Ronnie doesn’t really have hobbies. He lives the music business. He writes, he records, he sings, he tours. You ask him what his hobby is, he’s not a guy that plays golf or anything else. The music business consumes him and that’s what this project did — it just consumed him.”

Two years after he started recording material for the album, “Ronnie Dunn” arrived yesterday (Tuesday). It’s our first unfiltered look at the man considered by many to have country music’s purest voice. Dunn used some of the same collaborators and players we’re familiar with, but he also invited members of his touring band to record and worked with new songwriters whose perspective interested him.

“Different was the word I kept hearing from everyone,” Dunn said. “They said, ‘If you’re going to do a project you’ve got to come up with something different.’ And I kept saying, ‘How do I do that?’ … I felt at times we overcompensated.”

That overcompensation led to some amazing new songs, said Craig Wiseman, one of Nashville’s top songwriters who helped write a handful of tracks on the new album and won a Grammy for his collaboration with Brooks & Dunn on “Believe.”

Wiseman said he caught himself shaking his head after a few sessions, just amazed at Dunn’s ability to stretch.

“I’ve known Ronnie for a while, but this solo thing was impressive to watch,” Wiseman said. “He probably played me 30 songs, and I mean amazing songs. He’d play one song and you’d go, ‘That’s a total hit.’ He’d go, ‘That’s a little too Brooks & Dunn-y.’ He played me some songs where it was experimental. There’s some songs that I’ll never forget that he was like, ‘I don’t know if it’s quite there yet,’ that were really showing the range after he was turned loose. It was stunning stuff.”

When it came time to whittle down this mountain of material, Dunn faced the challenge of showing that range without chasing off the built-in fan base that made B&D the top-selling duo in country history. There are still a few tunes guaranteed to rattle the beer bottles on your high-top table, but there are tender moments made possible by shedding the duo’s macho honky-tonk image.

“ When it comes to picking songs that are a little more romantically inclined or love stories, you can go to a place where you can’t with two ugly guys standing there singing,” Dunn said. “It just kind of feels weird.”

“I Don’t Dance” is a straightup love song about turning down temptation for the one you love. In “How Far to Waco,” Dunn sings of how highway miles move so slowly when you’re heading toward a woman you want. And on “I Can’t Help Myself,” Dunn sings of a romantic interest who is in love with someone else — but that won’t stop him.

He wrote “Last Love I’m Tryin’” after his wife, Janine, sat him down for something of an intervention. Dunn was making a lot of changes in his life without much input. The last time that happened he came home with a large tattoo of the word “Cowboy” from his right elbow to wrist.

She asked Dunn during his manic songwriting period to take a deep breath and chart his course forward more thoughtfully.

“And she said, ‘Quit writing.’ She never said that before, so I agreed,” Dunn said. “And as soon as she turned the corner to go back to the bedroom I just dove for a pencil and paper and I wrote this song, ‘Last Love I’m Trying.’ In the back of her mind, she’s thinking maybe she’s going to be one of those impulsive moves and I’m going to exit the premises.”