‘The Red Fox of the Mountains,’ Part 5 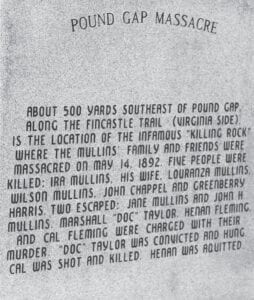 A monument atop Pine Mountain at Pound Gap, on the Kentucky-Virginia border, tells the story of the massacre at nearby Killing Rock.

Jane Mullins, the wife of Bad Ira’s brother Wilson Mullins climbed astride her horse and raced to Gladeville (now Wise, Virginia) after the shooting at Killing Rock at Pound Gap. She told Deputy Sheriff John Miller of the shooting and said that Ira and all the others but her were dead and thought Doc Taylor and the Fleming brothers were the culprits.

She had no way of knowing that Ira’s 14-year-old son had run like the wind back into Kentucky, grasping his overalls as he went. A shot cut his suspenders in two as he raced away. He had to hold them up to keep them from falling down around his ankles. The other five, including Ira, were dead, shot numerous times. Someone had shot Ira’s eyes out. The assassins quickly removed several hundred dollars from the clothing of Mrs. Ira Mullins and mutilated her body before vanishing into the brush.

The family and neighbors of Wilson and Jane Mullins recovered the bodies of the deceased and took them to Wilson Mullins’s home where the township of Jenkins, Kentucky, is now located. There wasn’t enough room for all of them inside, so some were placed on the porch. They are buried in the Potter Cemetery at Jenkins.

Deputy Sheriff Miller took Jane Mullins into protective custody at Gladeville. She was the only witness who could place Doc and the Flemings at the scene of the shooting. He would later say he believed her account of the shooting right from the beginning. The Red Fox had told him about Ira’s bootlegging many times and Miller knew he hated Mullins because his liquor sales left some families in dire straits. The Fox also felt that it was a bad example for the youths.

The deputy had even talked with Doc Taylor the day before about Ira coming the following day because a large number were coming to town because of their interest in the Talt Hall trial. Deputy Miller also noted the Fox’s conspicuous absence during the last 20 hours of Talt Hall’s trial for the murder of Norton, Virginia, police chief Enos Hylton. Fox had willingly stood guard over Hall during the preceding days.

At the conclusion of Hall’s trial a verdict of guilty was read and he was sentenced to “hang by the neck until dead.” He was finally going to face the hangman, unlike earlier trials when he escaped paying the ultimate price when jurors were too frightened to find him guilty. Talt Hall’s date with the hangman was set for September 2, 1892. Everyone knew they couldn’t keep him in Gladeville until then. Hall’s confederates would bust him out if the local vigilantes, bent on swifter justice, didn’t get him first. Arrangements were made to transfer Hall to Lynchburg for safekeeping.

The parts of the puzzle to the Ira Mullins murder started falling in place after the visit from Jane Mullins. The sheriff and deputies investigated the murder scene. Doc and the Flemings had fled into the mountains.

There were despicable outlaws in the Cumberland Mountain area during the 1800’s and early 1900’s but there were tenacious manhunters too. Big Ed Hall, a U.S. Marshal (and friend of Doc Taylor), Dock Swindall and “Gooseneck” John Branham organized a posse, comprised of 22 of the best available men, to hunt for the Fox and the Flemings. They met at a home by the Pound River to plan the Fox hunt (pun intended). They were well aware of Dr. Taylor’s cunning. Deputy Sheriff John Miller also joined the group.

The Fox left misleading clues exasperating the lawmen and deputies. After several days and nights in the wilds they discontinued the search saying the fugitives just couldn’t be found.

During this period the Fox were the topics of conversation throughout the mountain area.

“I’m gonna shoot a hole through him (the Fox) big enough to crawl through,” Gooseneck said. Branham was nicknamed Gooseneck because of his … well, goose-like neck.

Information soon came to the manhunt headquarters of the location of the fugitives. The heavily armed men slipped through the woods to the site but as the men quietly moved in toward their quarry, Booker Mullins slipped and fell. His cocked gun blasted for all to hear. After a brief skirmish in which outlaw Henan Fleming was wounded, Doc and the two brothers somehow vanished into the thin mountain air. Dock Swindall correctly surmised that the Red Fox couldn’t continue living long in the mountains because he was older and being hunted by such a large contingent of men.

Doc found it to be an advantageous time to separate from the group. He slipped away and made his way to his home in Gladeville (Wise). He was there just a day or so before, under the cover of darkness and disguise, he crept to his son Sylvan’s home in Norton. At nearly three o’clock in the morning, Doc tapped on his door and Sylvan let him in. Doc had lost several pounds while running from the law and his clothes no longer fit.

Doc, an intelligent man, knew he couldn’t stay there for a lengthy period. He began planning an escape from the mountains.

Jadon Gibson is a freelance writer from Harrogate. TN. Thanks to Alice Lloyd College, Lincoln Memorial University and the Museum of Appalachia for their assistance in finding information and pictures.This story continues next week.