‘The Red Fox of the Mountains,’ Part 6 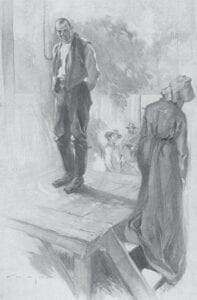 This drawing depicts Talt Hall with his sister before the Letcher County native’s hanging in Wise, Virginia. “Hall stood as motionless on the trap door as an oak,” John Fox Jr. wrote.

Doc Taylor (the Red Fox) found his way home under the cover of darkness and two nights later traveled to his son Sylvan’s home in Norton, Virginia, getting there before the rooster crowed. He had lost weight and didn’t have much to lose. Sylvan and his wife fed Doc before hiding him in the loft above the kitchen. A loose board enabled them to reach food up to him. He told his son that he was leaving the mountain area and planned to start a new life in Florida. They devised a plan of escape.

A day or so later, Sylvan’s brother, Johnny, arrived with a long box that had been used to ship fruit trees. Early the next morning Doc Taylor came down from the attic for the first time since arriving in Norton. He ate, bathed, and dressed in new clothes. A quilt was wrapped loosely around him before he laid down in the box. Doc was uncomfortable. He didn’t like what he was going through but what were his alternatives?

Sylvan nailed the clumsy box shut and it was taken by wagon, with the Fox inside, to the train depot at Norton. The box was labeled for shipment to Bluefield, West Virginia. Once in Bluefield, it would be put on a Norfolk & Western passenger train destined for Florida.

“Whatcha got there boys?” the station-master asked as the box was checked in at the Norton train station. “Oh, just a few books and stuff I wanted to ship to Bluefield,” Johnny replied.

The crate was put aboard a boxcar but railroad workers at Norton were suspicious of the fruit tree box that Johnny Taylor, the Red Fox’s son, checked in for shipment. They sent word to Virginia Commonwealth’s Attorney R. P. Bruce and to U.S. Marshal Big Ed Hall, who had continued his search for the fugitives from the bloody massacre at Killing Rock. Unbeknownst to the Fox, Hall mounted his horse and galloped to the station in time to board the train.

As the train rattled toward Bluefield the Red Fox breathed a sigh of relief as the train was leaving Virginia. He was thinking about Florida and making a new start in life. Meanwhile, elsewhere on the train, Big Ed Hall wondered what to expect from his old friend and fellow U.S. Marshal Doc Taylor (the Red Fox) once they arrive in Bluefield.

When the train pulled into the Bluefield station, Big Ed Hall clambered down from his coach and walked directly to the boxcar before the luggage and other items were unloaded. Hall showed his credentials to authorities and when the fruit tree box was taken from the train, he directed the agent to open it. The box opened after a few whacks and there lay Old Doc.

“Don’t so much as breathe, Doc, or I’ll blow your brains out,” the legendary man-hunter answered in a deep voice.

Doc offered no resistance. Local authorities arrived shortly thereafter and arrested the fugitive for the murder of Bad Ira Mullins and four other family members.

When Doc M. B. Taylor was returned to Wise, Virginia, to stand trial for the murders he was put in a cell adjoining that of his old nemesis, Talton Hall. Hall had exhausted all of his appeals and was awaiting the hangman’s noose.

The Fox feared Talt Hall and offered to shake hands to heal old wounds. Hall responded by cursing and striking at him with his manacles.

“I ain’t shakin’ hands with no one that kills women and children,” Talt blurted out with disgust.

Both the hunter and the hunted were now confined in close proximity.

In ensuing days, the Fox whiled away his time lying on a hammock in his cell, singing hymns and reading his Bible. He gazed at his pocket watch, studying it closely, before putting it away and resuming a mournful hymn and more reading.

Meanwhile Talton Hall, whose buddies had not broken him out as promised, enjoyed pestering his old nemesis.

“I know I’m bad but there’s many men worse than me in this world,” Hall, who had killed many men, would say as he kicked the wall with his huge boot. “The Fox in there for instance.There ain’t nothin’ twixt the Fox and me except this iron wall.”

Hall stared coldly at Old Doc with his dark eyes making the red-haired, red-bearded man uneasy. Talt Hall’s sister came to visit him just a few days before his scheduled hanging. He was flustered about his prospects of getting out and told her he was compiling a list of “certain individuals he wanted harshly dealt with and I don’t care what all you have to sell to get it done.” He told her he would have the list for her later.The Red Fox was undoubtedly high on the list, but he was being held for the murder of moonshiner Ira Mullins and several family members.

John Rawn, Talt Hall’s best friend, was a daring and shrewd fellow who kept a band of armed men at his call. All the available lawmen flooded the area including the substantial police guard from Big Stone Gap lessening the likelihood of John Rawn or Bad John Wright, also known as Devil John, interfering with the course of the law.

Heartbeats quickened a few nights later when a gunshot was heard near the jail. First thoughts were that Devil John Wright was attempting to break Talt out of jail as they vowed to do. They soon found, however, that a cow had wandered near the jail and one of the guardsfired in the dark.

“They’re not coming after me,” Hall spoke up, his hopes dashed. “No one’s coming for me.”

On the eve of his execution, Talt Hall tried to escape by starting afire in his cell. Although smoke filled the jail and there was a general alarm, his attempt was unsuccessful as the fire was doused with water.

“This man is the devil,” Doc complained. “He’s trying to burn down the jail. We need more guards. Don’t you know the history behind Bad Talt Hall?”

“Oh, I was just trying to smoke out the Fox,” Hall jested, to no one in particular.

A Washington Post story on the eve of Hall’s hanging, September 1, 1892, blazoned “Talton Hall on High Glee, Facing His Doom in Drunken Hilarity, He Pines for Vengeance. Hall, the mountain murderer, exhorts his sister to put three individuals out of the way and will announce their names from the scaffold.

“September 1, 1892 This is the last day on earth for Talton Hall, the Kentucky desperado and murderer of so many men and he is preparing to shuffle off in a gleeful manner. Liquor is constantly pouring down his throat. For two days he has been more or less under its influence and most any visitor is allowed to give him drink.

“It is predicted by many that he will cheat the gallows by committing suicide tonight. His sister, Mrs. Bates, was in conference with him for a long time today, telling her there were men she must have ‘put away even if she has to sell all the cattle and feathers.’ He refused to give her the names saying he would do so from the scaffold.

“It is felt that Judge Skeen, who sentenced him to death, private detective McBride who tricked him into surrendering in Memphis and Doc Taylor would lead the list. Doc Taylor was incarcerated, awaiting a murder trial.

The next morning as the guards led Hall from his cell to the gallows the doomed man paused as he passed in front of the Doc’s cell.

“Doc, I wancha to know that I ain’t got no hate left in me,” Talt Hall uttered. “I’m not takin’ that to the grave with me.”The Fox acknowledged him but remained a safe distance away.

Talt asked for his sister after he climbed the steps of the scaffold. The tall, thin, tanned lady came up and stood next to him.

“There’s been enough killin’ on my behalf,” he was heard to say to her. “I don’t want nothin’ more done ‘bout this. No more lives lost on account’a me. Stop it right here.”

“Oh Talt, I can’t let this go,” she said and began to cry as she left the scaffold.

Hall stood as motionless on the trap door as an oak, John Fox Jr. wrote. It was the first hanging in the county and two upright beams were used to hold the trap door in place in addition to a short rope. As the beams were knocked from under the trap door it sank an inch or more causing Talt to stand on his toes to keep from choking.

“The suspense was horrible because the poor wretch (Hall) had to think that, with each stroke, it could send him into eternity but yet not a muscle moved.”

“May God have mercy on this man’s soul,” Sheriff Holbrook cried out as he struck the remaining rope with a common hatchet.

Talt’s body dropped through the trapdoor and stopped at ropes-end with a thud. The sheriff wept and promptly exited the box which enclosed the gallows.

The Fox could hear the hanging of Talton Hall. He watched his timepiece for nearly two minutes following Hall’s fall through the trapdoor and the snap of the rope. He then breathed a sigh of relief before returning to his hammock and Bible. Both of his enemies were dead.

Talton Hall’s body was taken by wagon to the Dunham Cemetery in Letcher County, Kentucky for burial. In reality, he was buried elsewhere in a secret resting place to keep his many enemies from desecrating his grave.

Read more of this intriguing story next issue of The Mountain Eagle. Jadon Gibson is a freelance writer from Harrogate, Tennessee. His stories are both historic and nostalgic in nature.Thanks to Lincoln Memorial University, Alice Lloyd College, and the Museum of Appalachia for assistance with information and pictures.