‘The Red Fox of the Mountains,’ Part 7 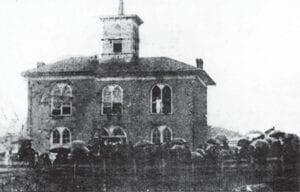 A sunny, bright day turned to rain on October 27, 1893, the day Dr. M. B. Taylor, the Red Fox of the Mountains, was hanged. He spoke to some folks from upstairs of the old Wise County, Virginia Courthouse. His wife made the white suit which he wore (see top right window). Doc said it was emblematic of the white he would wear in Heaven. Ordinarily black was worn in that era of public executions.

Doctor M. B. Taylor, the Red Fox of the Mountains, was found guilty of the murder of Ira Mullins and members of the Mullins family by Judge Samuel W. Williams on December 10, 1892. He later went before Judge H.S.K. Morrison for his sanity and sentencing hearing.

“Is there any reason why the sentence of death should not be pronounced on you?” an uneasy Judge Morrison asked. It would be the first capital case before Judge Morrison, and it would be the most notable. Before him sat the famed Red Fox and the judge asked, “What do you have to say for yourself?”

The crowded courtroom hushed as the defendant rose unsteadily and grasped a banister for support. One side of the Fox’s face was a picture of kindness while a grimace appeared on the other. “No, but I have a friend here who will speak for me,” he finally responded.

“Of course, we will hear your witness. Who will it be?” the judge asked, probably expecting it to be the Fox’s wife who was sitting nearby.

“Jesus Christ,” the defendant answered, followed by murmuring throughout the courtroom which rose to a crescendo before Judge Morrison called for “Order in the Court.” The judge, was momentarily caught off guard and reverently bowed his head for an instant as the Fox added, “Will you hear Jesus Christ?”

“Yes,” the judge answered, not knowing what to expect. A chill had fallen over the courtroom. The Fox took his Bible and began reading. He interpreted several passages regarding false witnesses and said he was innocent of their claims. Doc said he was a manifestation from Heaven and had spiritual visitations. He read long extracts from the Bible and said he had revelations that he would rise from the dead and that Christ would punish his persecutors and those who participated in his execution.

Taylor’s attorneys tried to avert a harsh sentence with a plea of insanity, but the judge did not accept it, indicating Doc had used judgment aforethought and proceeded to use judgment to evade arrest and prosecution after the killings.

“That’s enough Mr. Taylor,” Judge Morrison interrupted after hearing much of what he had to say and determining that no further light was being shed on the case. “I’ll not allow you to use the sacred name of Christ for your own purposes.”

Judge Morrison then announced the sentence of hanging to be carried out in Wise, Virginia, on October 27, 1893, between the hours of 10 a.m. and 4 p.m. Dr. M. B. Taylor, the Red Fox of the Mountains, was doomed. He asked that he be able to wear white attire for his hanging, including the hood. It was customary for a black hood to be placed over the head of doomed prisoners prior to their hanging. His wish was granted. His wife, Nancy Booth Taylor, made him a complete suit of white linen, even to the cap and sash to tie his hands.

“It is a symbol of purity of course and a symbol of my innocence,” he answered when questioned about it. “It is also emblematic of the fine linen that I will wear in heaven.”

His lawyers tried every legal remedy to get a new trial after he was found guilty of murder and sentenced to hang. His trial, like the trial and hanging of Talton Hall, received publicity in newspapers throughout a wide area and in major newspapers across the nation. A news reporter interviewed the Fox and the story appeared in a Big Stone Gap, Virginia, newspaper. It is believed to have been written by a writer in Lynchburg, Virginia, where it was printed initially.

“The most noted prisoner in the Wise County Jail is none other than Doc M. B. Taylor of Wise County who is under sentence of death for the murder of the Mullins family a year or so ago,” the story reads. “The date for his execution has passed owing to the issue of a writ by the Supreme Court of Appeals. Taylor is very hopeful of getting a new trial. He claims he has excellent grounds for his appeal.

“ He is a man of medium size, thin with rather stooped shoulders. He is 56 years of age and looks his age. He is quite bald on the crown of his head and has touches of gray appearing in the reddish-brown hair that covers the side and back of his head. A fringe of red whiskers of a much deeper color extends down either cheek and under his chin. His upper lip is clean shaven. His countenance indicates an intelligence above the average.

“ Taylor was a practicing physician in and around Wise County for a number of years before his arrest. It was from his profession that he got his soubriquet of Doc Taylor. His patients and friends all call him by that familiar abbreviation. “

A reporter called on him at the jail and Doc talked about his prospects in a legal battle to save him from the gallows. Taylor asserted his innocence of the heinous crime of waylaying and murdering a family of five persons in cold blood with the assistance of two other men who are still at large.

“He attributed the crime laid at his door to the malice of his enemies in Wise and adjoining counties. Taylor was a deputy and U.S. Marshal and says his police work made it hot and uncomfortable for a gang of moonshiners and bootleggers who infested that region. He claims he has been the object of their hatred ever since. His theory is that the murder was carried out by a gang who plotted beforehand to cast suspicion upon him and carried out their plans accordingly. He said that a brother of Ira Mullins was killed previously by some of the same people, and nobody had been brought to justice for the crime.

“Taylor talks quite calmly about his probable fate. He is a constant reader of the Bible and prays three times a day. He claims to have a close communion with God and His angels. Taylor is a member of what he calls the Church of the New Jerusalem, the doctrines of which he explains are a medley of the tenets of the Adventists and the spiritualists.”

Taylor told the reporter he was fully prepared to die if the court decided against him. “I aim to keep myself fully prepared,” he said. “All men must die sometime and my death upon the gallows would cut me out of only a few years of life anyway. It is probably as easy a death as a man can die. I have thought about it a good deal and I don’t think men who are hanged suffer much. I know it is a death that is looked down upon and is considered a disgrace but better men than I have gone to the gallows. Christ himself died an ignominious death but I don’t mean to compare myself to Him. I have always been regarded as a man blessed with peculiar gifts. I have perceptions and intuitions that give me a sort of insight into future things, and I don’t fear the future. I can’t explain myself so that you can understand but I rest secure in my religious beliefs and have no fear of death.”

The reporter concluded with his impression of the prisoner. “If Dr. Taylor did commit the terrible crime of which he was convicted and the evidence, though largely circumstantial, brought it very close to him, there is little doubt that he is truly penitent and that he has received absolution. If he has to go to the gallows, the presumption is that he will go with a firm step and without a tremor.” l

Doc Taylor preaches his own funeral in the next segment to appear in The Mountain Eagle. Jadon Gibson is a freelance writer from Harrogate, Tennessee. Jadon’s stories are both historical and nostalgic in nature. Thanks to Lincoln Memorial University, Alice Lloyd College and the Museum of Appalachia for their assistance.