‘The Red Fox of the Mountains,’ Part 9

Search is still on for Flemings 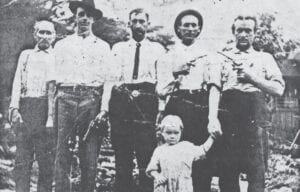 This photo of the Fleming family was taken in the late 1880’s. Pictured from left ar Jefferson Fleming, the father of the clan, Cal Fleming, Henan Fleming, John Fleming, and Al Fleming, who is holding the hand of his child. Cal and Henan Fleming were accused of helping the Red Fox commit murder.

Miraculously, Cal and Henan Fleming survived the exchange of gunfire with the posse and made the best disappearing act of the era, especially considering the injuries they sustained.

The Flemings had a penchant for escaping, blending into their surroundings, going incognito, to use a current expression. Despite their injuries they were on the move. Oh, some of the mountain people saw them briefly but the Flemings took little or no time for talk. They had family, in-laws, outlaws, and some strangers who gave them assistance. Cal and Henan admitted involvement in the shootings at the Killing Rock at Pound Gap. It was common knowledge anyway, but they took no time to discuss any particulars. Their talk was very brief as they were on the move.

Later on, Cal Fleming said they laid in a cave with a constant dripping of cool water onto their wounds. It is very likely their mother got pain medicine for them from a Dr. Phipp, or Phipps. He was likely an herb doctor but in that era herb doctors were available. They offered an option for relief before the arrival of trained medical doctors. Keep in mind that competent herb doctors gave training to others. 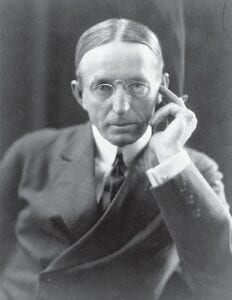 This photo of the author John Fox Jr. is in the Library of Congress.

The Flemings’ ability to evade the law in the wilds by spanning large distances with little rest is something they must have learned from Marshall B. “Doc” Taylor, aka the Red Fox of the Mountains.

The famous author John Fox Jr. is not to be confused with Doc Taylor the Red Fox. The author wrote “Trail of the Lonesome Pine,” “Bluegrass and Rhododendron,” “The Little Shepherd of Kingdom Come” and others. He was a member of the volunteer police guard at Big Stone Gap, Virginia, during the time Bad Talt Hall, Doc Taylor (the Red Fox) and several other notorious bad men were brought to justice.

Fox was having breakfast in a Big Stone Gap hotel in the spring of 1894 when news came that the “wily old Daddy of the Flemings” had been captured and his sons, Cal and Henan, would probably soon be captured.

The noted author dropped his knife and fork and scurried to pay his bill and get underway. As a member of the police guard, he would be needed near Pound. The Flemings weren’t expected to give up easily. A shootout was imminent because the Flemings knew the hangman’s noose may be awaiting them if they were caught.

It was hot as John Fox Jr. rode to the site of the gun battle at the head of Pound River. He described the area as “a wild, beautiful, lawless region that harbored the worst desperadoes of Virginia and Kentucky. They do their mischief in each state and then hide across the state line to avoid the law.”

The famous author came upon a double log cabin with windows covered by hanging quilts. “Who lives here,” he asked as an old woman appeared in the doorway. Her answer startled him.

“The Flemingses lives hyeh,” she answered, quietly. Of all cabins, John Fox Jr. had stopped for directions at the home of the culprits. “Whar air ye from,” she asked. After answering that he was from Big Stone Gap, she asked if he had been part of the earlier raid in search of her sons. He said that he hadn’t.

Her throat was so big it looked as though she had a goiter, and it shook when she laughed as she reflected on the raid by the lawmen. “One fool feller stuck his head up into the loft and lit a match to see if my boys was up thar,” she explained. “He lit a match! He wouldn’t ‘a had no head ef my boys had been up thar.”

Her huge throat shook again as she laughed. Then she became somber as she lit her pipe and started to speak. “I reckon you know my boys is hurt, maybe even somewhere dead in the woods by now,” she spoke matter-of-factly. “Ef you git hold of ’em I wish you wouldn’t harm ’em.”

The three women and two children in the cabin watched as John Fox Jr. left after drinking a glass of buttermilk they had given him.

Meanwhile, two members of Big Ed Hall’s posse found a cave they determined was likely used by the Flemings as a hideout. They found blankets, bits of ham, a bag of meal and other items. Along a nearby pathway, they found a large pile of shavings that came from many hours of idle whittling. They determined the cave was one the Flemings used previously.

Soon the posse arrived at the cabin where the Flemings paused for a quick bite of food. The woman of the cabin spoke of their injuries.

“Henan’s shoulder was all shot up an’ I coulda put my hand inta the hole in Cal’s back,” the woman said with exaggeration. “Cal was groanin’ a good deal an’ had to stop every ten yards or so ’cause it was a’painin’ him so bad.”

John Fox Jr. finally caught up with Big Ed Hall and members of his posse. The men were armed with Winchester rifles and other weapons. They guffawed at the “ridiculous” little .32 Smith & Wesson pistol the author carried. “Gooseneck” John Branham gave him a long-barrel pistol and a faded slouch hat to wear. The hat belonged to Henan Fleming and he was wearing it until it was jarred from his head when a shot shredded his shoulder earlier that morning.

Jadon Gibson, a Caney Junior College and University of Kentucky graduate, is a widely read Appalachian writer from Harrogate, Tennessee. His writings are both nostalgic and historical in nature and can be read weekly in The Mountain Eagle. A special thanks to Lincoln Memorial University, the Museum of Appalachia and Alice Lloyd College for their assistance.