The manhunt for Flemings comes to end 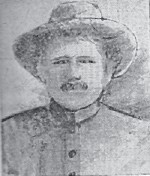 Ned “Big Ed” Hall was only 39 years old when he was gunned down near his home in Pound, Virginia.

Wise County, Virginia announced a reward for the capture of Cal and Henan Fleming. They were as slippery as eels, out of the picture for several months. Some thought they were dead somewhere in the woods. Even their mother thought so. Still, Big Ed Hall, “Gooseneck” John Branham and Doc Swindall continued their search.

In the earlier gun battle involving the Flemings and their would-be captors, many shots were fired over a period of nearly 30 minutes. The battle on this day would last less than five minutes.

Cal Fleming was caught totally off guard as Big Ed, Gooseneck and Swindall surged through the door as the outlaw was reading a letter. It was a small store and post office combined but as many as 12 other people were in the building. “You are my prisoner,” Big Ed said as he grabbed Cal by the lapels of his coat and held a gun on him.

Almost immediately Henan Fleming shot Big Ed in the back of the head, dropping the officer to his knees. Ed’s gun discharged as he fell, and the shot killed Cal. Henan turned automatically toward the other two lawmen and shot Gooseneck through both lungs and Swindall through the neck.

Big Ed Hall’s head injury must not have been as serious as thought. He had fallen to his knees but quickly got back into the melee, exchanging shots with Henan. A shot shattered Fleming’s jaw but the battle continued until a bullet ripped through Henan’s hand, sending his pistol to the floor. He ran to the back of the store but there was no exit. He had to return to the front where the bloodied Big Ed waited and had the drop on him.

“I can’t fight no more Ed,” Henan muttered dejectedly as he gave up.

Within minutes the store had become a bloody mess. Five characters were bleeding heavily. Cal Fleming and Gooseneck Branham were dead. Ed thought Swindall was dead, too, but Doc was splashing cold water on his neck from a cold mountain stream that flowed immediately beside the store. He would survive.

The letter that Cal Fleming was reading before the shooting that took his life was from Jarvey Caudill back in Wise County. It said, “Look out. Gooseneck Branham, Doc Swindall and Ed Hall are after you.”

There was a news story that came from Clintwood, Virginia on February 18, 1894, that read “Our correspondent has just learned that ‘Orb’ Fleming, brother of the outlaws Cal and Henan Fleming, shot and killed a woman in the vicinity of Pound Gap, where the Mullins family was murdered in the spring of 1892. The woman was the wife of Wilson Mullins who drove Bad Ira Mullins’s jolt wagon that was laden with liquor on the fateful day.

“It is felt that the motive was that Mrs. Mullins was the material witness against Henan Fleming. She was killed so she couldn’t testify. The report says she was about the premises of her home and was shot by someone hidden in nearby woods.”

Six months later, Henan Fleming was well enough to be returned to Wise to stand trial for the slaying of Bad Ira Mullins and four others. The date was July 24, 1894. Marshall B. “Doc” Taylor, better known as the Red Fox of the Mountains, had already been hanged for his part in the massacre and his brother Cal was killed by Big Ed Hall during the West Virginia shootout.

Would Henan have to pay with his life on the hangman’s noose for his involvement? Henan was pale as he sat in the prisoner’s box during his trial. There was a sunken place where a bullet from Ed Hall’s gun had smashed into his jaw.

The famous author John Fox Jr. approached the prisoner during a recess in the trial. Henan glared at him with dark eyes as he recognized the author as the man who had worn his hat during the manhunt.

“You’re a lucky man,” Henan told Fox. “I was beadin’ on my hat and if you’d a taken three steps my way, I’d a had ye. A man shouldn’t take another man’s hat.”

The author hesitated and decided against saying that Henan had taken much more and under less honorable conditions. “Henan, did you ever get your hat back?”, the author asked instead. “No,” Henan answered.

“Well, if you come clear from all of this you go up to the store and get the best hat in town and have it charged to me,” Fox replied.

That brought a smile from Henan but everyone, including the author, felt he would certainly suffer the same fate of hanging as Talt Hall and The Red Fox before him, but no one was left to testify against him. The commonwealth’s attorney attempted to establish his guilt for five days but without a witness he was found not guilty, and he was free to leave. Had she not been murdered by Orb Fleming, Jane Mullins, whose testimony sent The Red Fox to the gallows, would have been the lone witness to place Henan Fleming at the scene of the crime.

In any event, Henan Fleming was released and rode out of town. But before leaving Wise, he paused to buy a brand-new derby hat, a hat that he charged to John Fox Jr. He went back to West Virginia and lived honorably thereafter and actually served several years as a lawman.

Big Ed Hall’s real name was Ned, but he didn’t like it, so he dropped the N early in life and became Ed. In January of 1895, Big Ed was hauling firewood when a loud crack from a rifle filled the air when he passed a nearby store. The bullet struck him in the back. He reached back for his rifle but his hand wouldn’t let him grasp it. Ed’s wife “Cat” ran toward him screaming. He clambered down from the wagon to find cover at the Swindall house but collapsed on the front porch, where he died. Another of the great mountain man-hunters was no more.

Jadon Gibson is a free lance writer from Harrogate, Tennessee. His stories are both historic and nostalgic in nature. Thanks to Lincoln Memorial University, Alice Lloyd College and the Museum of Appalachia for their assistance.