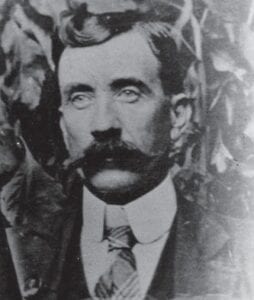 Marshall B. “Doc” Taylor is pictured at right. One of Doc Taylor’s two worst enemies is jailed in Gladeville (now Wise) and Doc finagles to get rid of the other in a later segment of this true story.

Dr. Marshall B. Taylor was one of the most unique characters to live in the mountains of eastern Kentucky and southwestern Virginia. He stopped in the small town of Donkey, located on the Pound River in Virginia. Donkey had a violent history with as many as 50 murders within a few years. The name of the town was later changed to Pound, after Pound Gap and the Pound River nearby.

The Donkey settlement became an outlaw town due to its location along the natural passageway between the states of Kentucky and Virginia. The nearness of the state line was of strategic importance when they needed to escape. Doc Taylor traveled along that interstate connection often and enjoyed visiting “Big” Ed Hall after Hall’s appointment as a U. S. Marshal. Hall was originally from Floyd County, Kentucky, but moved to Donkey due to the heavy incidence of crime. Big Ed had an immediate impact once he was there.

Ed was a famous mountain man and bounty hunter at other times in his life. He stood nearly 6’ 3” and weighed well over 200 pounds at a time when the average man was about 5’ 7” and 146 pounds. He and Doc Taylor enjoyed discussing the Civil War in addition to exchanging information about the criminal element in the region. The meetings led to Doc Taylor also being appointed a Deputy United States Marshal under President Benjamin Harrison.

Doc related how he was a member of the Confederate Army in the war but deserted because he didn’t believe in killing. He hid in the woods to escape detection after returning to his home area because he thought bushwhackers may be targeting him.

The name bushwhacker evolved following the Civil War when individuals who served or were partial to one side or the other would ambush, often from bushy areas and thickets, those who served on the opposing side. They also waylaid individuals like Doc Taylor who took up hiding in the hills to escape serving on either side. Doc survived this difficult period because of the positive contributions he made through his medicine and God’s ministry.

Many returning soldiers chose to relocate to states in the west such as Texas, Oklahoma, Missouri and Kansas to escape the wrath of bushwhackers. Some courthouse files from the period are marked with the initials GTT, meaning “gone to Texas” to explain their absence from their previous abodes.

Doc soon resumed calling on the sick and injured. He also continued his preaching, feeling he was safer ministering to his fellow human beings than if he spent his time hiding out. The mountain people welcomed him into their humble cabins for food and lodging. He personally witnessed the adverse effect that alcohol had on the mountain families and the influence it had on their spiritual well-being. He became a federal officer, or so-called revenuer, to fight the scourge of alcohol.Doc Taylor’s twin Colt 45’s on his gun belt, wound around his body with two rows of ammunition, gleamed much like that of Poncho Villas. He would often sit on any one of several mountaintops, surveying the land through his brass telescope as he watched for signs of curling deadwood smoke, often a telltale sign of where the illegal white liquor was being made.

Doc knew many pathways through the mountains and his movements were so swift he could sweep down on a moonshiner, make an arrest, destroy a still and return with his prisoner to the county jail in Gladeville, Virginia in short order. When he was outnumbered or faced situations he feared, the Fox would take potshots from a safe distance. Gladeville was the county seat of Wise County but its name was changed to Wise in 1924.

Doc Taylor was an eccentric, his mental bearing a little left of center some would say. Area residents credited him with superhuman powers of mobility however. He appeared from behind bushes along a trail to talk with a passerby only to be seen or heard from a considerable distance away not long thereafter.

Doc often traveled by foot and affixed the heels backwards on a spare pair of shoes that he carried in his saddlebags or with his medical supplies. At times he wore them in the wilds to conceal his whereabouts and to confuse anyone trying to track him. His prowess and deceptiveness along with his red hair and beard earned Doc the nickname, the Red Fox of the Mountains. There were several cases where Doc’s quarry walked right into his trap while the fugitive was thinking he was putting distance between them.

Many moonshiners and bootleggers lived in Kentucky but sold their illicit white lightnin’ and “likker” on the Virginia side of the mountain.

The Fox made life difficult for them, yet at times he traveled for miles atop his star-faced black mare, with his medicine and herbs in tow, to treat a sick friend or a total stranger. Day or night he gave comfort but might charge nothing in return.

On a given day Doc made sick calls, performed a wedding, presided at a funeral, delivered a baby, watched for moonshiners, or performed any other task that doctors, preachers and lawmen perform.

He had the reputation of being a good friend, or a fierce enemy, and his face exhibited those traits. One side of Doc’s face appeared peaceful and serene while the other displayed a twisted snarl that some likened to a canine. That seems unusual but the author knows of someone today who has such a characteristic.

Doc was accused of murdering an outlaw by the name of Robert Moore in the town of Donkey in 1876. He was tried but found not guilty for lack of evidence. Although it was generally felt that Doc killed Moore, he was acquitted after arranging an alibi.There were many mountain people who “owed” or felt obliging to Doc, for his services.

The Red Fox’s work as a federal marshal caused resentment among some of the roughest characters in the mountains. Several vowed to have him killed.

Ira Mullins was one of these. He lived near Donkey, Va., about ten miles north of Gladeville, the county seat of Wise County but you might say he lived on the edge of the law. A moonshiner and bootlegger, Ira earned the nickname “Bad Ira.” Bad men in that era often had the word ‘bad’ affixed to their name.

Bad Ira was a large, gaunt, raw-boned mountaineer who feared no one but was feared by many. He hauled whiskey in the back of a jolt wagon covered with straw. In that era, bootleggers and moonshiners generally showed up at the county seat on court days and Ira’s customers could count on him to be in Gladeville (now Wise) the county seat of Wise County, Va., with his liquor.

Doc Taylor’s police duties also brought him to Gladeville and he was aware of Ira’s activities. He had taken potshots at Ira as he traveled from Kentucky to Virginia with the only damage being to some of Ira’s liquid merchandise. The hatred between the two festered when Bad Ira was ambushed in the township of Gladeville while returning from North Carolina with a legal load of stamped whiskey. The lawmen opened fire on Ira and his party, killing his driver. Ira and his other worker escaped when they rounded and took refuge in the home of one of his customers.

Later in the day Ira walked undisturbed out of town but he carried a grudge with him. Ira had lost his whiskey and his driver. He also lost his freedom because thereafter he would always have to be mindful of the dastardly, at least recognized as such by bad men, Red Fox.

“They treated me like a dawg,” he would say. “They bushwhacked me right in the town of Gladeville mind ye, and tried to shoot me down like a dawg.”

I ra vowed revenge against the Fox and placed a $300 bounty on his head, not a small sum in that era. The Fox had taken potshots at him in the mountains but now he had tried to ambush him right in the county seat of Gladeville

Editor’s note: Jadon Gibson is a widely read Appalachian writer from Harrogate, Tenn. His writings are both historical and nostalgic in nature.