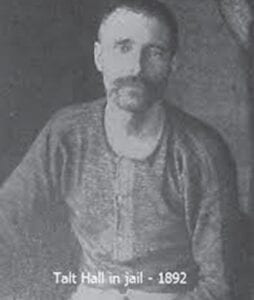 Letcher County native “Bad Talt” Hall once claimed to have killed 99 men, though some of them were slain during his service under General Morgan in the War Between the States.

My grandfather, Walter Brownlow Gibson, was just one of many Hancock County, Tennessee residents who went to Wise County, Virginia in the early 1900’s to work in logging and later in mining coal. This was near the time that several bad men such as “Bad Talt” Hall were brought to justice on the gallows at Wise.

In writing about Marshall B. “Doc” Taylor I must include information about “Bad Talt” Hall and “Bad Ira” Mullins because their lives were so intertwined.

Talton Hall was born in a log cabin along Troublesome Creek in Letcher County, Kentucky and became a notorious clansman, feudist, killer and the first to be hanged in Wise County, Virginia. His exploits fill a bloody chapter in the history of eastern Kentucky and southwest Virginia.

Hall once claimed to have killed 99 men, though some of them were slain during his service under General Morgan in the War Between the States. He was recognized for his reckless daring.

After the war he continued his reign of terror as murder seemed to be a common amusement for Hall and members of his gang. They were frequently arrested, but their trials brought acquittals as their threats struck fear in the hearts of jurymen who feared retaliation.

Hall was acquitted for the coldblooded murder of Henry Maggard in 1866 and Don Pridemore in 1875. A jury let him go after he murdered Matt Baker in 1881 and he served no time for killing his brother-in-law in 1883. In 1885 Hall killed his cousin, Mark Hall, and laughed at the sheriff attempting to arrest him.

It was penned that after one of his early shootings he climbed atop a nearby fence, flapped his arms, crowed like a rooster and exclaimed, “After this I’m going to be known as Bad Talt Hall.” He was.

Talt shot Police Chief Enos Hylton in the railyard at Norton, Virginia and left him to die. Helen Hylton, the lawman’s wife, said during the trial that she saw her husband after he was shot.

“He seemed to be suffering with the blood oozing out of his breast,” she testified. “If any of you ever saw a man in the agonies of death you know how he looked. This was about 2 o’clock p.m. and he lived until about 2 o’clock the next morning. When I first went to him after he was shot he said, ‘Helen it is a death shot this time.’ He said that he wanted to go home when he died and then changed that saying he wanted to go to Heaven when he died.”

Public sentiment ran strong against Hall after the murder of Police Chief Hylton. He fled the area and hid in Lee County, Virginia, before traveling to Middlesborough, Kentucky where he registered in a hotel before traveling on to Memphis, Tennessee.

Doc M.B. Taylor, the notorious Red Fox of the mountains, eventually learned of Talt’s hiding place in Memphis from a female acquaintance. He hired two detectives and directed them to arrest him by saying he was wanted on a misdemeanor charge from nearby Mississippi. He said it was unlikely that he could be arrested nonviolently unless they decoyed him. Once he was jailed, they told Hall it wasn’t for a misdemeanor but a capital murder charge in Virginia. He fell to the floor in a cursing fit knowing he had been tricked into giving up and may face the hangman’s noose.

“If I knew his purpose I could have killed him before he reached the top of the steps,” Hall boasted later.

Doc Taylor went to Memphis with Sheriff Wilson Holbrook and a small contingent of officers to watch over Talt Hall on their return from Memphis. Word had spread of Hall’s capture and a group of irate citizens learned of his anticipated arrival at the Norton Train Depot, a short distance from where Hylton was shot and killed.

Doc noticed the crowd as the train rolled into the Norton Depot and knew some trouble was brewing. He also knew it wasn’t a welcome party. Doc chose to take the lead, exiting the train with a big pistol in each hand. The crowd jeered and cussed when the shackled Talt Hall followed. Squire Salyers, close relation to the dead policeman, made a vicious swipe at Talt Hall with a clasp knife almost immediately. A group of officers subdued Salyers while Doc and two other officers whisked Hall off to the jail at Gladeville, the name of the county-seat before it was changed to Wise in 1924.

Though Hall and his Kentucky mountain clan were concerned with his capture and impending trial, they were well-aware he had been “busted” out of jail before. Hall and his confederates chose not to act too swiftly. There had never been a legal hanging in Wise County … not before Hall anyway. They decided to wait and see what transpired in the days to follow.

Read more of this amazing true story next week. Jadon Gibson is a freelance writer from Harrogate, Tenn. He is pleased to make his stories available to readers of The Mountain Eagle.